Obviously before i start, for the fans. i have sympathy they are the innocent victims. during the play off final i had heard that if they had lost there would be Economy drive, i didn't realise to what scale. but for the board absolutely No sympathy for them because i dont like how stupid the money has gotten & them also Newcastle to be fair are the main culprits for that because the publicised (in Sheffield) midtable budget for wilder in 2018 last time we were championship in 2011 was probally a top 2/4 budget

Aston villa just in transfer fees have spent 80m, Spent 10m+ multiple players like Hogan mccormack kodija & also 8m on Chester. & as you say dread to think what their wage bill was. when they have 80,000 a week on JT. then wages the ones above + Loan PL player wages. appartantly they are losing £6m a month, astonishing no one thought espically in the 2nd season after finishing 12th in the 1st. What if when we spent parachute payments & we haven't got promotion. because parachute payments are supposed to get a club transition, not gambled away & making everything twice as bad. Appartantly they have to raise 75m by august and I think ive got it to 60m on transfer fees & wages. selling grealish Chester elphick Hogan Mccormack, JT gone, Loans of Snodgrass, Johnstone, Grabban returned

I'm just glad that i have wilder because he refuses to overspend. because of his times at Northampton & Halifax, he knows the real victims of this crisis are the behind the scenes people on average wages in likes of club shop ticket office, or admin

Staff Member
Premium Contributor
We were (and still are to an extent) chucking money away. Kodja's sale to Villa ironically plugged a pretty big whole in our budget a while ago. Our losses last year were down on the year before but a loss all the same. This year we've been helped hugely by our cup run and the fact that the stadium refurbishment is fully complete and has started to maximise it's potential. That said, with our wage bill still far too high as a percentage of turnover, I still believe we are going to make a loss.

Our chairman is determined to get the club into a position where we are sustainable so I expect to see us sell a few of our highest performing young players this summer and see some of the academy lads step up and fill the void. I'm not sure if we can maintain our progress in to next season. This will be a big test of both the manager and the clubs strategy.

Well its not suprising that you are making losses. Its not your fault why ive no sympathy For villa (& newcastle) because just in 1 season we had in this league theyve made teams & fans feel like they have to risk a clubs future to achieve the premier league riches. That if your not spending money you dont have, over spending on players. pushing your club to the financial brink for promotion. Fans blaming owners for not doing things right

Most recent financial figures i could find were 15/16. & every club (bar wolves that wouldve been £4m loss if afobe for 10m hadnt been sold) 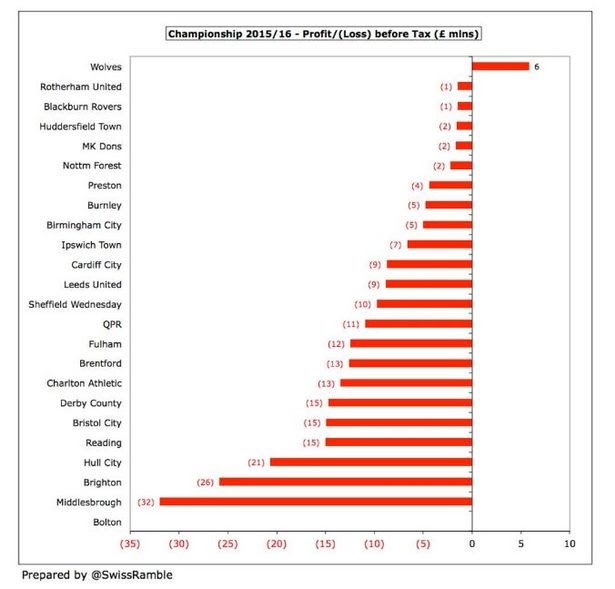 cider_and_toast just remembered on Saturday its the 3rd CTA derby. After we both beat each other away last season. How you going,

As from the start of the season to end of the window. Weve been transformed from worried v swansea to 1 of best halves of football ive been lucky to witness in 20 yrs of being going to bramall lane in the 4-1 win v Aston Villa

Staff Member
Premium Contributor
We've taken a while to settle down. Having sold 3 of our biggest names over the summer for around 30 million and replaced them for far less, its taken the team and the fans a while to adjust. As it is we've found our feet now.

Going into the international break our form had hit its stride and we played Blackburn of the park in the second half. As it is though, we always struggle to win immediately after the break. God knows what our manager does with them for two weeks but our win percentage in the two games after the international break under our current manager is something in the region of 6 percent.

I'd be delighted with a point on Saturday. We have three tough games in a week, You on Saturday, the baggies away on Tuesday (my first game of the season) and then Wigan away on Friday. I expect about 4 points from that lot and anything more would be an absolute bonus.

yeah good point both had overhauls losing some main players. but wilder done well added depth that we didnt have last yr & oliver Norwood is the biggest bargain going 2m for best midfielder in championship. he is outstanding, how brighton have 4 better midfielders than him I dont know but I would be happy with point as well because your our toughest game until 20th October til Derby A as we have very winnable games with Birmingham H, Preston H, Millwall A, Blackburn A & Hull H

but I see what you mean saw in that you beat reading & then drew with 2 relegated sides in burton & Barnsley. hope you enjoy your day at the hawthorns

Congratulations cider_and_toast we will call that 2-1

I felt we were better team over the 90mins. Had few good chances in that 1st half. We deserved a draw but like our analyst on radio Sheffield Keith Edwards, who really didnt like your £5m striker, said for £5m & hes done nothing. But thats our keith blunt & honest

He was spot on in tight games you have to make the most of being on top the higher up the divisions you go. We didnt, You had a great 15 min spell where we were hanging on & scored. We got punished.

Staff Member
Premium Contributor
F1Brits_90 to be honest, your analysis of the game, including your commentator's comments on our £5 million man, echo exactly what's being said on our forum. Utd looked the better side for the bulk of the game. You had our main striker Fammy, in your pockets for the whole time. We had a 15 minute spell where we were on top and our subs made the difference.

Delighted with the result. Not confident of repeating it on Tuesday night.

We are not the finished article by any stretch and our man at the top.may take us on another of his legendary winless runs but I'm chuffed that while things are going in our favour were getting those points on the board.

cider_and_toast said:
the baggies away on Tuesday (my first game of the season
Click to expand

Staff Member
Premium Contributor
Came away thinking that game could have gone completely the other way had we have made something of a totally dominant first 20 minutes. We played some decent football but 4 defensive cock ups, 2 from our right back who had a mare most of the night, cost us dearly. West Brom are a good side and have some real quality but we made them play off the back foot and counter attack. For all our hard work and effort we came away with a score that didn't quite reflect the game. On another day that should have been at least a point but hey-ho, "on another day" points don't exist and the baggies took their chances and made us pay. Lesson learnt.

As an aside, their fans were bloody quiet. It was quite a poor atmosphere all game. Anyhow, another of the 92 ticked off.

unlucky today cider_and_toast i was listening to the game while working this afternoon & you were brilliant 2nd half. extra time was least you deserved. but like they say the better opposition the more you have to take your chances as you don't get many.

ah welcome & im biased but i think theres a much better team that play in red. you blades

but anyway im hoping you lot can finally win the title. after so long play great football & love klopp

I feel Liverpool has lost the championship... I'm still recovering

yes your on a bad run of form at the moment 2 wins in 7 at the moment. I did notice that the players decision making that was fantastic v Watford was dreadful v man utd & everton. but you've got to think of the positives your unbeaten since the fa cup defeat at the start of January & like my team on Monday derbies are anolomys. & you had to have 2 in a week, because they are bit like cup finals & teams will always up there game for that. derbies are 100mph but little quality like the last 2 sundays & the Sheffield derby on Monday.

also your 1 point off with 9 games to go, got a nice run in only tricky games are spurs & Chelsea both at home. whereas Man city have still got the Manchester derby at old trafford

F1Brits_90 said:
yes your on a bad run of form at the moment 2 wins in 7 at the moment. I did notice that the players decision making that was fantastic v Watford was dreadful v man utd & everton. but you've got to think of the positives your unbeaten since the fa cup defeat at the start of January & like my team on Monday derbies are anolomys. & you had to have 2 in a week, because they are bit like cup finals & teams will always up there game for that. derbies are 100mph but little quality like the last 2 sundays & the Sheffield derby on Monday.

also your 1 point off with 9 games to go, got a nice run in only tricky games are spurs & Chelsea both at home. whereas Man city have still got the Manchester derby at old trafford
Click to expand

To think we were leading with 9 points end year. Not befitting a champ team yet

vintly said:
Weird timing that you just liked the Barca post BradMan - I'm off there with my daughter again on Saturday for the Rayo Vallecano game

I could see a face to the name, great to see u Vintly... the pics registered on the last page here... then afterwards back to first

BradMan said:
To think we were leading with 9 points end year. Not befitting a champ team yet
Click to expand

also as admirers of barcelona. definitely search out & watch "take the ball pass the ball" its a first-hand account of events between 2008 and 2012, when barcelona were arguably the greatest ever club team in world

what a game, i couldnt be prouder of the team. outstanding effort in both games Tuesday & Saturday such a vital 3pts. this the biggest game for leeds since Watford Play Off final & sheff utd since Oxford H aug 2016

brill tactical from wilder. he knew you cant go to elland rd, domimate & kitchen sink was going to chucked 1st half. so he made sure we stayed in the game sacrifice some offensive for defensive & bring on fresh legs later once we grown in to the game. which was 40mins in. 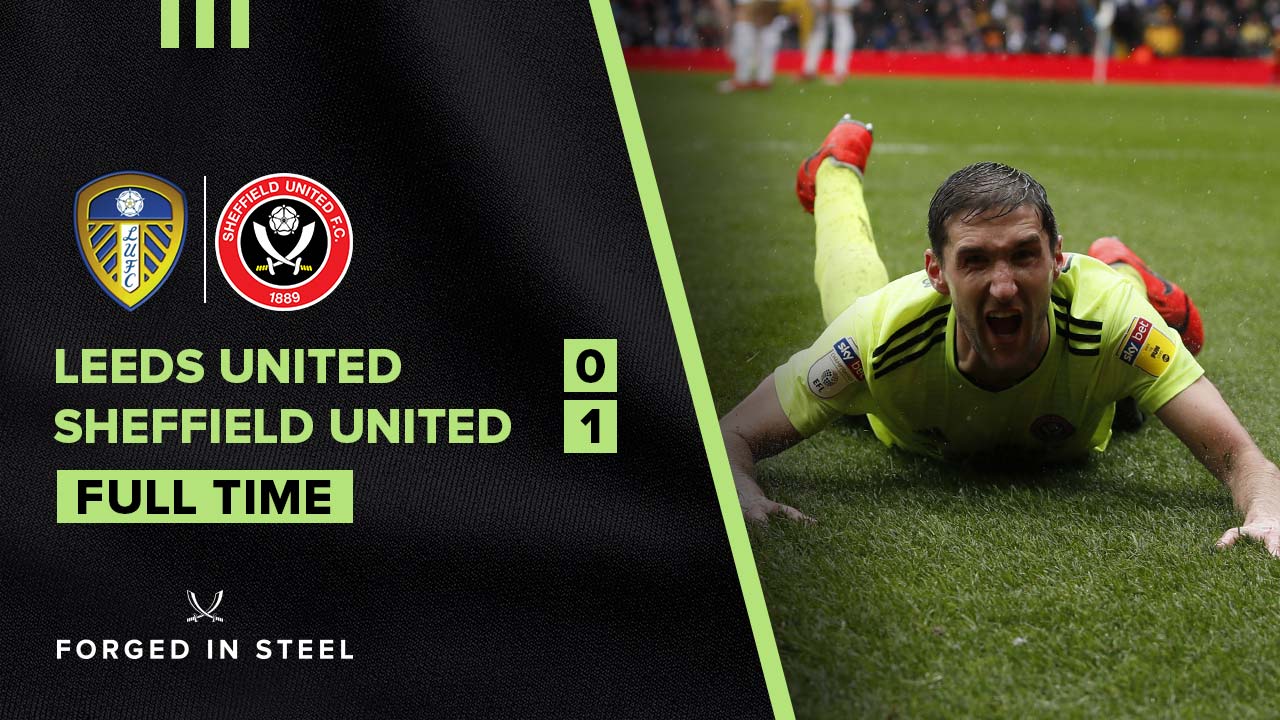