Supporter
This season's marbles looks a lot like last season. Apart from the different marbles involved in each match! I bet....
... What's that? This isn't the marbles thread..!

Ermm, this season the football looks quite exciting. Not quite as exciting as the marbles mind you, but you know, beggars can't be choosers. Without a marbles thread, a football thread will have to do!

Ahem! Anyway, Bristol City have made quite a few interesting signings over the summer, which will hopefully make the Championship campaign this season less of a nail-biting ordeal than last season (which ended with City staying up anyway, so can't have been that bad!

Staff Member
Premium Contributor
The fact that in July City made signingS already indicates it's going to be a better season than last year.

The Premier shoud provide some interesting moments given the absurd amount of money being thrown around. Leicester proved last season while there is no cap on the cost of a player, there is on their ability. Just because you spend 100 million it doesn't mean you get 10 times more talent than a 10 million pound player.

Its a massive year of change for my team Sheffield United. Huge clearout new manager who releasing 12 transfer listed 5 & brought in 7. I want to have hope but want is making me apprehensive is & particularly 3 years ago. We thought we had cracked it under David Weir especially after the opening win over Notts County. So much positivity went down the drain as we nearly did a Doncaster exiting League 1 the wrong way. As I had to witness the worst utd team in my time & doubt it ever be topped. Even adkins team which was poor would beaten weirs team easily. Thankfully Clough rescued us.

But still we can have a laugh because our fans so outraged at being charged £30 for a 3rd tier game. That were taking to Bolton. More away fans than 8 L1 teams averaged at home last yr

Newcastle fans should look at us & leeds. As we know how tough it can be for big teams to bounce back in league below. 6 years now its so difficult because as Newcastle will find out are their own worst enemy. Because like last season teams will park the bus v us as they think a point at bramall lane is great result even if were 11th but then open up go for a win against a lesser side like Gillingham/Walsall who are 2nd

Staff Member
Premium Contributor
Good luck to everyone for a successful season. Unless you're playing Bristol City in which case, good luck suspended for the duration of the match to resume on completion.

City won their first game of the season. OMG!!

F1Brits_90 said:
....Newcastle fans should look at us & leeds. As we know how tough it can be for big teams to bounce back in league below..../QUOTE]

All my friends who are Leeds followers put it down to a series of owners who were only there to take money out of the club and hiring managers who had no money to spend despite promises before they were signed up but were encouraged to go for players on loan. So no settled managers or players, hardly a recipe for promotion.

And of course the ball is the wrong shape for playing in Leeds.
Click to expand

very true, cellino is a hindrance no continuation because there was strong rumour than garry monk couldve been sacked after 3 games if they'd lost a 3rd consecutive game v the dark side he would get the sack & you need time to build a side. doesnt come overnight & its a strange one because its not like wigan id say Rugby & football is 50/50

we are having an absolute nightmare, we've been unlucky in the 2 games away & crewe in league cup. but absolutely shockingly terrible in the 2 home league games. southend was disturbing 15mins ive seen was speechless as they waltzed thru our defence to make it 3-0 in no time. never known a game so vital in august v oxford because that is simply must win. were only 5 games in

According to some media broadcasters', Aston Villa squandered a first half lead...
..how can a team squander a 1 nil lead and lose 3-1? Sounds more like a sound beating to me!

Staff Member
Premium Contributor
McZiderRed it's because it was little 'ol Bristol City doing the whipping.

What are your thoughts on Codger going to the Rams?

Supporter
cider_and_toast If he goes, it won't be to the Rams. From the noises coming from the club and the speculation from the press, it sounds like a bidding war is being stoked up... City will take as much as they can get, for a striker that needs 5 chances for every goal he scores... Besides, if he tries to leave, Kodjia will be found to be off-side anyway!

Staff Member
Premium Contributor
I must admit, if we get around 14 million for him then the footballing world really has gone mad. But hey-ho, if that's what someone wants to pay then who are we to stop them?

cider_and_toast said:
McZiderRed it's because it was little 'ol Bristol City doing the whipping.
Click to expand

Always the way. Your not wrong because how dare bristol city beat big aston villa. But as always the way when burnley beat liverpool it was all how bad they Liverpool was. No credit to burnley. Prices have got stupid your looking 10m+ for people who've never been in premier league

What a Relief to finally get 3pts yesterday what ever was bigger than must win yesterday was it. Came back with a great dominant performance. by far the better team just had bad luck Waiting for it to turn & hopefully we have cracked it & we can go for it now

They are paying one hell of a lot of money for a guy who knows less about the offside rule than my wife. Don't get me wrong, it could prove to be a fantastic move for both club and player but, just over 20 years on from Alan Shearer breaking the UK transfer record moving from Blackburn to Newcastle, 15 million gets you a championship player with 2 international caps and one half decent season. Crazy.

Contributor
As I understand it cider_and_toast this puts her way over the top of the great majority of fans.

Good luck tonight cider_and_toast McZiderRed away to the dark side

Contributor
I've never really followed an English football club, but have been watching Barcelona for the last decade. My youngest daughter Sylvie has become a huge fan, so for an early birthday treat we went to see them play Atlético Madrid at the Nou Camp on Wednesday, just got back. What an experience. All the stars on show with just shy of 90,000 fans in the stadium. Rakatic opened the scoring, heading off an Iniesta cross, but they equalised after a slip from Masherano let Correa through. 1-1 at full time - not ideal but a great spectacle nonetheless. More of a concern in Messi's groin injury - he came off after about 60 mins. He's not prone to injuries but this has been niggling for some time, could have an impact on their season. Hey-ho, it's only football 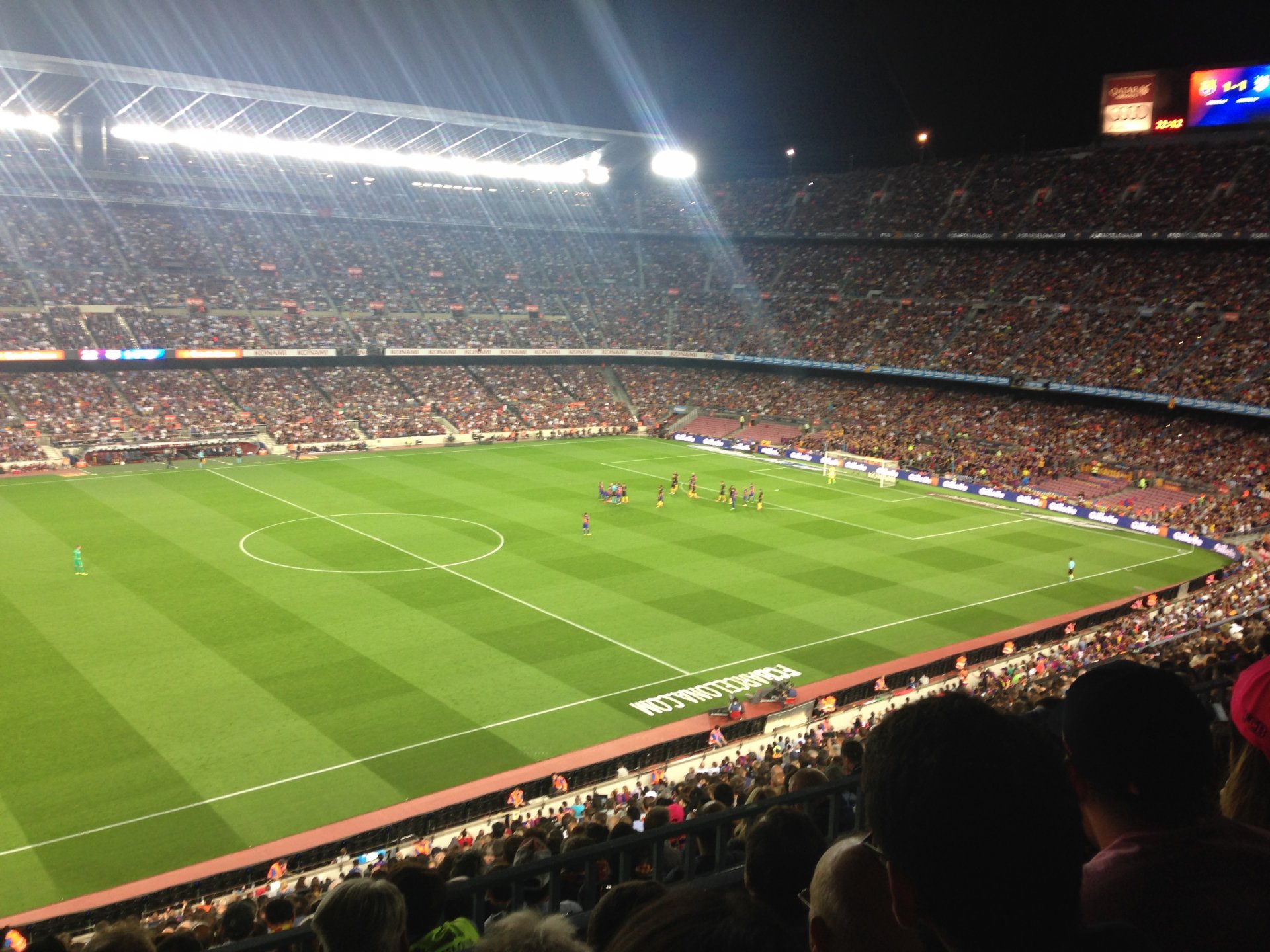 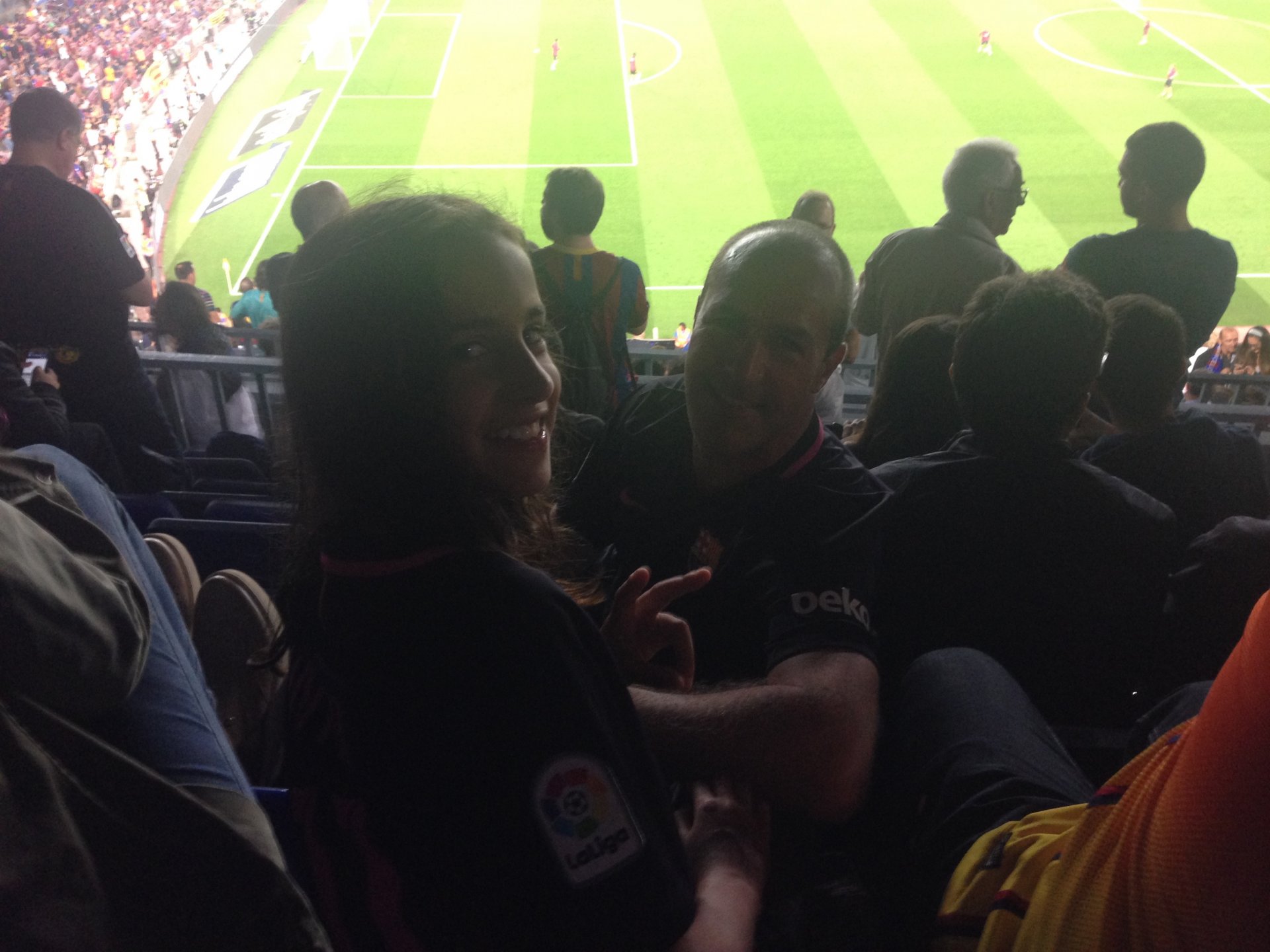