F1 arrives in Europe at the Circuit de Barcelona-Catalunya. Last year we had a Hamilton pole and a Hamilton win, I suspect we will see the same this weekend and if it is what hope is there for Rosberg in the title race? Beaten in to third in Bahrain, Nico's season appears to be being flushed around the U bend before it has even started. All the rhetoric in the press conferences and in the podium interviews don't seem to translate in to speed on the track. If I was advising Nico I suggest he do his talking on the track but he just doesn't appear to have the same pace as Lewis.

Ferrari seem to have found some pace but are still not able to challenge the lead Mercedes. It was nice to see Raikkonen back on the podium in Bahrain. A few uncharacteristic mistakes from Vettel, and his team mates better strategy, saw the German pushed back to fourth and his record in Barcelona isn't stellar so maybe Kimi will keep him honest this race too.

Williams will be next. Massa has started the season the better of the two but Bottas was faster in both qualifying and race in Bahrain and Williams have some upgrades for Spain so they might be closer to the Ferrari's.

The mid field battle is quite close with Toro Rosso, Sauber, Red Bull, Lotus and Force India all squabbling over the position from 6 to 16. All teams and drivers have scored points in races so far, with the exception of Pastor Maldonado, and no one team appears to want to take the Fourth Best on the grid position. Hopefully the TV coverage will let us see more the mid-field squabbles as the front running teams disappear in to the distance. Or maybe there will be a titanic struggle at the front and none of us will give a monkeys about who finishes 7th.

At the back will be Manor Marussia and McLaren. I wonder if McLaren will be able to get two cars to the grid for this race? Barcelona isn't traditionally a high attrition race so I suspect McLaren will continue in the same position in the WCC after Spain as a British Eurovison entry with Nul Point. Manor, well done for just being there and with Will Stevens showing some reasonable speed in a very slow car have we found Britain's next World Champion?

It's a paella and Rioja weekend, enjoy.
Click to expand

Staff Member
McLaren are making a radical change for this GP.

They're replacing the chrome livery with 'a dynamic, predatory, graphite-grey colouration, complemented by McLaren-dayglo ‘Speedmarks’ and keylines'.

Valued Member
Wow, wonder if that makes the engine more powerful and reliable?

Staff Member
Valued Member
When you have no idea what to do, doing anything is better than doing nothing.

Won't the darker less-reflective paintwork absorb more heat? I thought overheating was one of their key problems.

Valued Member
It is hrtical. I mean, heretical.

Brogan said:
McLaren are making a radical change for this GP.

They're replacing the chrome livery with 'a dynamic, predatory, graphite-grey colouration, complemented by McLaren-dayglo ‘Speedmarks’ and keylines'.

Valued Member
The excitement of the General Election seems to have dampened the enthusiasm for this race. Here's my 1-2-3

Rosberg will retire on lap 24.

Hamilton to fight back from some early race issues while Rosberg makes heavy going of beating Vettel.

It has to happen at least once this season.

I have a sneaky feeling Vettel could get this one. I always find this race a bit shit so am struggling to get excited.

Contributor
Does anyone have the number of laps for each of the drivers this morining. That beautiful lack of information timing screen simply does not have it. It looked to me that there were fewer laps driven than normal. 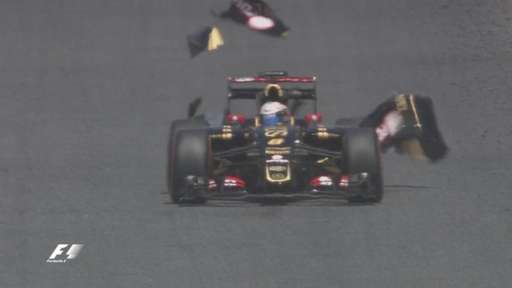 Staff Member
Luckily there was no-one directly behind him.
Could have been nasty.

In other news, Ricciardo's engine has blown.

rufus_mcdufus said:
I have a sneaky feeling Vettel could get this one. I always find this race a bit shit so am struggling to get excited.
Click to expand

Glad there is still hope out there. Cause I got a feeling Hamilton wins easy peasy.

Is this the first time GP2 cars overlap some F1 cars in time?

Contributor
Well practice 1 has thrown up no surprise. Mercedes still on top.
Please ...... Can we have a team to challenge.

Contributor
I'm not going to mention McLaren although they were only around one and a half seconds behind Hamilton today. The times set by their drivers seem to be quite close at the events where they get some clean running.

Last year this was one of the races where Mercedes domination was more evident. From what we've seen they are still a second faster than second best Ferrari. I expect no surprises tomorrow; Lewis - Rosberg - Vettel. Toro Rosso is looking strong and Mclaren seem to have run a 2 minute mile and are back in contention, let's see if qualifying confirms the improvement.

Contributor
I have a feeling it will be a Mercedes 1,2 procession.