F1 arrives in Europe at the Circuit de Barcelona-Catalunya. Last year we had a Hamilton pole and a Hamilton win, I suspect we will see the same this weekend and if it is what hope is there for Rosberg in the title race? Beaten in to third in Bahrain, Nico's season appears to be being flushed around the U bend before it has even started. All the rhetoric in the press conferences and in the podium interviews don't seem to translate in to speed on the track. If I was advising Nico I suggest he do his talking on the track but he just doesn't appear to have the same pace as Lewis.

Ferrari seem to have found some pace but are still not able to challenge the lead Mercedes. It was nice to see Raikkonen back on the podium in Bahrain. A few uncharacteristic mistakes from Vettel, and his team mates better strategy, saw the German pushed back to fourth and his record in Barcelona isn't stellar so maybe Kimi will keep him honest this race too.

Williams will be next. Massa has started the season the better of the two but Bottas was faster in both qualifying and race in Bahrain and Williams have some upgrades for Spain so they might be closer to the Ferrari's.

The mid field battle is quite close with Toro Rosso, Sauber, Red Bull, Lotus and Force India all squabbling over the position from 6 to 16. All teams and drivers have scored points in races so far, with the exception of Pastor Maldonado, and no one team appears to want to take the Fourth Best on the grid position. Hopefully the TV coverage will let us see more the mid-field squabbles as the front running teams disappear in to the distance. Or maybe there will be a titanic struggle at the front and none of us will give a monkeys about who finishes 7th.

At the back will be Manor Marussia and McLaren. I wonder if McLaren will be able to get two cars to the grid for this race? Barcelona isn't traditionally a high attrition race so I suspect McLaren will continue in the same position in the WCC after Spain as a British Eurovison entry with Nul Point. Manor, well done for just being there and with Will Stevens showing some reasonable speed in a very slow car have we found Britain's next World Champion?

It's a paella and Rioja weekend, enjoy.
Click to expand

Staff Member
Premium Contributor
With regards to Will Stevens, Autosport don't seem to rate him. The last edition had an article on his team mate who they describe as 'highly rated'. They also constantly talk about Steven's weight advantage saying it's hard to judge the true pace between the two.

no-FIAt-please said:
Vettel was fifth behind Bottas.
Click to expand

Indeed he was. I shall leave the original post just to show what an oaf I am.
Last edited: 26 April 2015

Contributor
I don't want to believe that McLaren will be at the back again.
Please, Ron, don't let me down....

Contributor
I read a thing that said the Honda engine is amazing and full of every innovative go faster bit they could think off and can easily beat everyone. But because Mclaren insisted on putting it in a small F1 car rather than a refrigerated box van, it now has overheating problems so it doesn't work. At least not until they figure out how to change the laws of thermodynamics.

Contributor
I wonder what would do better in a race. A Mclaren with no engine cover / body work and the engine turned up to max, or the piece of shit they are currently running. 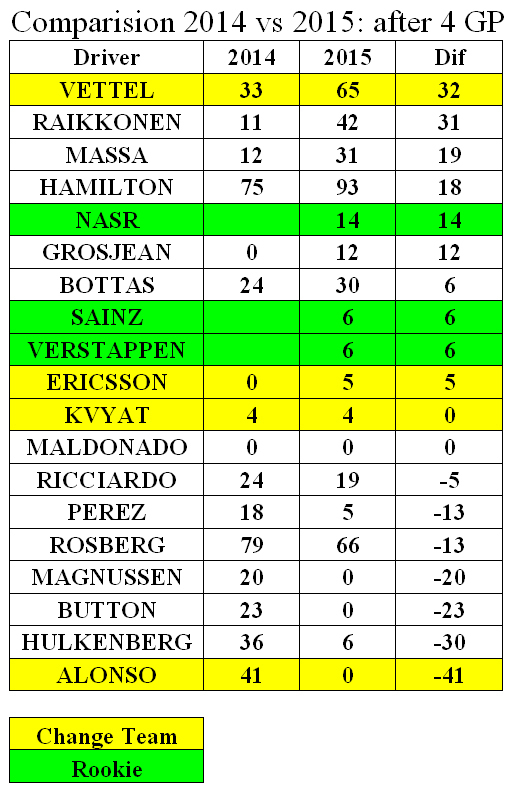 What is the reason?
Team or drivers ?

Staff Member
Premium Contributor
In Alonso's case that crate of crap he's got to drive is the cause of his current lack of points.

For Vettel it's a decent car and a new lease of life in those red overalls.

Staff Member
It's impossible to use Räikkönen as a benchmark.

Some races/seasons he just doesn't even bother to try.

He was beaten by Massa one season...

Brogan said:
It's impossible to use Räikkönen as a benchmark.

Some races/seasons he just doesn't even bother to try.

He was beaten by Massa one season...
Click to expand

It is very much difference how strong was beaten.
Last edited: 28 April 2015

Contributor
Raikkonen used to be good. He isn't any more.

Being able to beat Raikkonen is a minor boast at best. A bit like going for a 5 mile cycle or finishing a whole fish supper. Good for you, but its not really that impressive.

The last chicane at this track is the worst corner in F1, now that the chicane at Singapore has been eliminated.

Valued Member
I liked the Singapore chicane, it was unforgiving. This one is unforgivable.

You don't know how much panic you instilled by this one remark!

Valued Member
Hey, I posted a link to the Spa 6 hours clearly showing it was the 2nd of May and then went out thinking it was today. Doh!

olegg the only one who has shown no more progress is Maldonado despite the team having a better engine
Last edited by a moderator: 5 May 2015