Staff Member
Premium Contributor
Here we go then, get your head around these teasers:

1) A Renault, Mercedes or Ferrari engine has been in the back of every race winning car since 1999 except for one occasion. Which engine was that ??


The BMW in the back of the 2002 Williams
2) Simple enough: For half a point each, name the year and where did the two Ferrari's go on to finish? 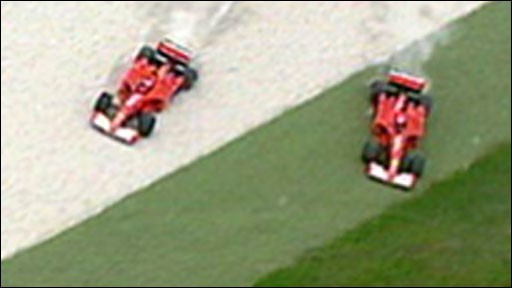 Both Ferrari's span off at the same corner at the same time in 2001 and they recovered to finish 1-2
3) In the rain shortened 2009 GP, Jenson Button took the win for Brawn. Two Germans rounded out the top 3. For half a point each, name them.


Stewart GP qualified 5th and 6th and finished 4th and 5th
5) Which current driver could join the Malaysia GP triple winners club should he win this year?


Juan Pablo Montoya set in 2004
8) Which team never finished better than 10th at any Malaysia GP they entered but managed to qualify in second place at the 2004 GP?


Jaguar Cosworth (with Mark Webber at the wheel)
9) In the spirit of this years Oz GP, which driver went down as a DNS due to gearbox failure in the 2014 race?


Sergio Perez in the Force India
10) Sebastian Vettel took his first Malaysian GP win in 2010. How many German drivers made it into Q3 at that race?

I'm annoyed at myself for missing a couple if I'm honest.