In 1976 Montreal hosted the Summer Olympic games. This in itself is not that interesting a fact but what is interesting is that it is estimated that the Olympic stadium cost the city of Montreal somewhere in the region of 1.6 billion Canadian Dollars by the time the bill was fully paid in 2006. What does this have to do with F1? Well apart from the obvious, that the Circuit Ile Notre-Dame, as it was originally known, or the Circuit Gilles Villeneuve as it became known, is partly built around the 1976 Olympic Rowing lake, there is a wider reason to celebrate the GP. In the wake of the Olympics the city almost bankrupted itself. Such was the dodgy state of the finances after the Canadian government insisted that the full costs were met by the City, that anything that wasn’t nailed down was auctioned off. What this highlights is that while on the surface, it would seem to be the greatest show on earth, under the surface the shear effort required to project that image can do lasting damage. Surely an analogy for F1 if ever there was one.

This is why we must celebrate Canada and the Canadian GP. From the moment that Gilles Villeneuve won the first race held in Montreal in 1978 the circuit has proven time and time again what an asset it is to the F1 calendar. There are any number of great moments that spring to mind from Button harrying Vettel into a last lap mistake to take an unlikely win, to the hilarity of Nelson Piquet winning for Benetton in 91 after Mansell had caused his own engine to cut out when he’d been leading by a mile and slowed down to wave to the crowd. There are even small events such as Takuma Sato in his Super Aguri chasing down and eventually passing Fernando Alonso to finish in 6th place. A move that gained him the award for ‘Overtake of the year’ showing that F1 fans have a sense of humour even in F1 doesn’t.

The circuit itself remains refreshingly unchanged from its first race in 78. There have been minor changes to kerbs and a pit lane extension to cope with NASCAR grids but apart from that little else. Back in the mid-90’s before Bernie outlawed the teams having fun unless they paid a ‘fun premium’, the mechanics would hold a raft race across the Olympic rowing lake, on the Thursday before the race. From my old and dusty Jordan F1 team supporters club letters, it would seem Jordan picked up the winners trophy in this race several years before Damon Hill picked up their first trophy on track. It could be argued though that Hill was possibly only slighter drier than the Jordan raft building crew.

That’s the sort of atmosphere that surrounds the race though. It’s tough, it’s unpredictable and it’s hugely enjoyable. For those who like a drink with their F1, there are more than enough ‘drinking game opportunities to be had including every time the ‘wall of champions’ gets a mention or stories surrounding Alesi’s first win or the Olympics. The race will be live on both Sky and the BBC again proving how popular it is.

As for the current grid, coming off the back of Monaco, this is the shot in the arm that the sport needs. Hamilton will be odds on favourite to add to his three victories at a circuit where he took his first win and one that he clearly enjoys. Proving how difficult it is to succeed here, only a handful of drivers have won this race more than once although Michael Schumacher does account for a staggering 8 wins at this track.

Let’s hope that Canada doesn’t let us down because it rarely does.
Last edited: 26 May 2015
Click to expand

Contributor
I find that extremely funny - an exemplar of modern life.

To keep on thread, it is effing boring so far!

Premium Contributor
OK so it was a Mercedes 1, 2 again. Boring. But the Canadians did a really good job at showing us the racing through the field, and there was some. Which was great.

Serious question: Why is Rosberg not allowed to know Hamiltons fuel if Hamilton is offered information about which meters (50, 100) he should lift and coast at twice & offered the knowledge that Rosberg is better on fuel but worse on brakes... I don't have a horse in the Mercedes race, but that sounds a bit uneven and possibly breaking driver coaching rules, no?

I wondered that. Surely telling the driver where to lift off is telling him how to drive the car?

I liked Coulthard's little joke about McLaren when their second car was retired and being wheeled into the garage - 'get everyone out, toss in a hand grenade and leave'.

McLaren are just such a state. I'm no fan of Fernando but to see someone with his talent stuck in a car with no power, no sponsors, no reliability and now it appears a thirst for fuel is such a waste. Just watching Jenson being interviewed and he's trying to be positive and up beat but both he and Fernando must wonder what the hell they have got themselves in to.
Last edited: 7 June 2015

Staff Member
Premium Contributor
To add to the list above I thought Erricson drove well today.

There were some nice moves going on around the field but when you look 25 seconds up the road and the Mercedes cars are having their little pretend race, reality comes crashing back and you realise it's all futile. Mercedes are in a field of their own and when all conditions are normal Hamilton is untouchable.
M

Contributor
Romain was a bit of a pillock though..

it is totally unacceptable it all points to Ron Dennis it was never this bad under Whitmarsh...as EJ mentioned
More on McLaren's plight

Posted at21:13
"There have to be major changes in the top management of McLaren.

"Ron Dennis has to look at himself and ask 'What is happening on my stewardship?' It was never as bad as this under Martin Whitmarsh."


1986 Canadian GP winner Nigel Mansell: "We need McLaren and Honda, it takes time, hang in there JB, FA - it will get better soon."

Where should we start?

a engine seriously down on power and really fuel thirsty . Are you serious ?

What have Honda and Mclaren been doing for the past 15 months in reviewing the regulations?

At least Jonathan Neale comes out admitting honestly they have serious work to do ( Where again is Ron Dennis ? Stop hiding please)

I was convinced Honda would have had a mule running thousands of laps around Suzuka last season but it appears they knocked the engine together over lunch one day with and old motor out of the Spirit car with a couple of D cell batteries sellotaped to the engine cover for the hybrid system.

"It's a difficult balance [focusing on reliability and improving the car]. We were weak in both areas this weekend. Hopefully we can solve these issues in two weeks."

Jenson Button... Is this a bit better..? Well, probably depends upon how you look at it. 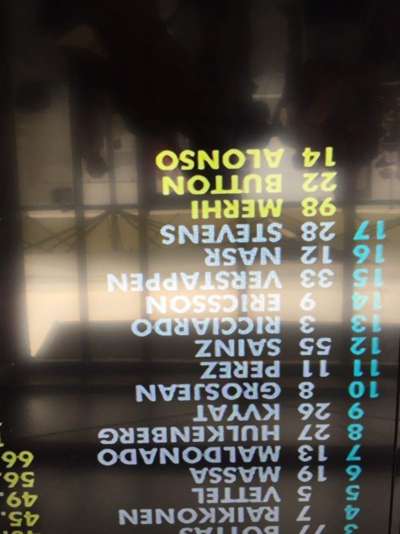 FB Incidentally there is a job as a Finance Analyst going at Mclaren doing in Woking looking to make sure they have quality control and cost effective parts which I applied for . I should not be slating them on here then if they follow F1 threads in case they might be looking at my profile

As for the others

Its business as usual .. Lewis just that much better than Nico

Slightly behind Ferrari and benefited from their problems to steal a podium. Their car should suit the next few races coming up

Massa did well to comeback showing the speed of the car

Opportunities missed to get good points. I thought Hulkenberg's defence as a bit tame against Vettel compared to Alonso's

Same as FI and I was thinking Grosjean was doing a solid job until he crashed into Stevens.

Daniel said he was laughing so he would not cry.. it is clearly not just the Renault engine that is the issue with car

Verstappen's weekend ruined by the penalties

Contributor
What on earth are people talking about? The way I see it is Jenson is mint, Alonso is mint, the car is mint, the engine is mint McLaren are mint and Ron is especially mint.

Crap I forgot to take my rose coloured spectacles off before posting.

Eric are you running the power unit at 100%?

in front of the cameras with their no holds barred speak

Worrying though for rest of yr that it didnt live up to high expectations I usually have of Montreal because this normally 1of best of the season. But I feel lewis is too good for competitive intra team race rosberg might have been near throughout but he never feels like threat at any point not just this race i cant remember last time nico overtook lewis on the track. Vettel & Massa gave me some excitement especially that pass on hulkenburg

F1Brits_90 said:
his qualy/race notebooks are fantastic
Click to expand

I'll watch that instead then..

Mephistopheles said:
I'll watch that instead then..
Click to expand

sometimes they can be better than the race haha, but i honestly do learn so much from ted about F1 even after 15+ yrs of watching formula 1

F1Brits_90 said:
Delighted for ted kravitz on podium doing the interviews seemingly loved by everyone & his qualy/race notebooks are fantastic
Click to expand

He surely beat the hell out of other names, who were mentioned to handle the interviews on the podium like.... Al Pacino.