Valued Member
So, soon it will be the Rugby World Cup. A draw which throws nations together deserves an F1 quiz.

1. Where was the last race started by a driver from New Zealand?


Canada, Mike Thackwell in 1984
2. Which was the last year when there was not a French, Japanese or New Zealander driving at the Canadian Grand Prix?


2009, of course, there was no Canadian Grand Prix!
3. France has been unrepresented with a driver since Romain Grosjean. Which was the last Grand Prix in which two Frenchmen competed?

4. In how many of Juan Fangio's title winning years was the runner-up British? 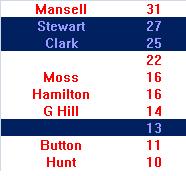 6. How many times did John Watson win a Grand Prix in America?


1982 in Detroit and 1983 in Long Beach. From P17 and P22 on the grid respectively!
7. Which of these countries scored their first podium in another pool C country?


Russia in Australia this year (Petrov)
8. Who was the last person from any of these countries to win at Monza?

9. It is sad that the most prominent F1 link between these two countries occurred when Tom Pryce died at the 1977 South African Grand Prix. 2/3 of a point for each of the podium finishers.

Contributor
6!!!
(Just out of interest, when is the Rugby World cup??)

mjo said:
(Just out of interest, when is the Rugby World cup??)
Click to expand

Starts on 9th September with All Blacks vs Tonga at Eden Park.

4 forgot an obvious one in Q5

Cookinflatsix said:
The good thing is that England's catchment area is slowly starting to resemble New Zealands
Click to expand