Contributor
Ok, so what do we think?

People don't like change. Having said that, the argument for change is strong: civilisation needs to use less energy.

But has F1 thrown the baby out with the bathwater? The sound of the cars has changed radically, will we get used to it? Do we have to just suck up and deal with it? Should the sport mandate that cars all carry loudspeakers to bring it back? What would you do?

Contributor
The only practical way to improve the sound would be something like the attached pic.

The quiet is strange but will get used to it. What I do like are the additional noises that were always hidden. The tyre noises have been epic so far! 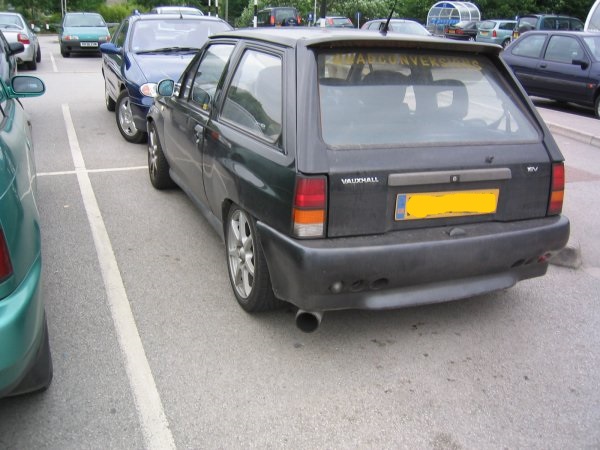 Valued Member
I love it, for the reasons F1Yorkshire states.

The vast majority of F1 fans watch most of the races on TV. When watching F1 on TV the engines are mostly background noise. It's nice to hear the cars shifting and revving, but you can hear that even clearer now, in my opinion. So I would say that people are making too much of a big deal over this. I think if you asked most people now if they wished we could go back to F1 2013 vs what we've had today, I think they'd vote for the new cars as a whole. People will always see the negatives in these things.

I also don't get it from a petrol head POV. I'm not a petrol head as much as I am a sports fan, but this is the most interested I've been in how the cars work. They're so much more advanced and complex now. So much more is going on and the engineers have so much more to get on top of. We've had stagnation for quite a few years now when it comes to the engines. I want to embrace the new. When it comes to watching F1 on TV, the sound of the cars is one of these things you only notice when it is taken away.
Last edited: 15 March 2014

Contributor
I don't mind the pitch, and other whistles, but it's just so quiet, makes me think that there is a lot more power to be had, but the engineers weren't allowed too due to the various regulations. It's like they have michelin star chefs competing to make the best casserole.

I like it. I'm finding it easier to differentiate between engine noises already. Something sounded very odd, like an angry man growling! Think it was the Ferrari engine.

Contributor
I've said it before, the greatest place for sound was the exit of Bridge at Silverstone. The sound was mostly masked until just before the cars appeared, then there was a blast as they went hurtling past you.

There have been many changes of sound during the lifetime of F1, from the low pitched power sound of the early cars through the banshee howl of the BRM H16 to the high pitched scream of recent years. We will get used to it.

Contributor
I am the eagle.

Valued Member
Is that my souped up Nova Yorkie?

I'll get used to it I suppose, not mad keen on it atm tbh.

Contributor
How about I don't care I just want to see real racing.

I miss the option "I couldn't care less"

Contributor
I still think they sound like a load of superbikes, maybe not even as powerful as that, but I don't much care really.

Voted for the last option and I'd like to hear how people are perceiving the issue from track-side. What I heard on a Sky feed wasn't very good but on the Beeb highlights show I could hear the cars a lot better and I like the fact that they sound different to each other. It's also interesting to hear the turbo sounds and tyres squealing.

The main problem is the sound engineers who mix down the sound sources have the balance too far in favour of the commentators. The Beeb did a much better mix - something they have always been better at in my view. Wotsisname screaming his head off in the Sky commentary box drowned out all the ambient sounds from the circuit - something he has always been far too good at. The sound engineers need educating that the ambient sounds, particularly the noises from the cars on track, give us punters a flavour of the atmosphere of the event. Over excited and excessively loud commentators detract from that.

Contributor
Me likes it

Contributor
Second only to the sound of a Rolls Royce Merlin is this:


Not keen on the new sound but as I voted, I'll get used to it. I like the whine, that's it for now.
M

A couple of times the commentators commented (!) on the lack of noise on the feed - how about, y'know, turning up the field mics?

They do seem a bit dumb on that front don't they?

I just can't get used to that wheezing sound under braking, it sounds like me struggling to breath because of my asthma! I'll get used to it though...

Poll Are the new regulations working?
2 3