Staff Member
As most of you know, the site has been running the same software for many years now - XenForo (XF).

XF2 was released late last year and is a complete rewrite of the code, offering significant improvements and enhancements.

It looks like this in its default format: XenForo community

Upgrading isn't a problem - it's a simple task, but there are several issues which would need to be addressed.

1. The server software is very old - PHP 5.x - which means we can't take advantage of all the new functionality in XF2 (emojis in posts for example). Also, PayPal will no longer support sites which aren't HTTPS very soon and we would need to switch to a new server in order to implement that anyway.

2. Featured threads and the home page would have to go - it won't work in XF2 and I don't have time to rewrite the code. A basic home page may be possible but there would no longer be any thread featuring.

3. Although they are no longer used, the OTDB and FF1 add-ons won't function in XF2 - they would have to be rewritten (which I don't have the time to do), or removed completely. An alternative option would be to archive the DB in a non-functioning dormant site, but I'm not sure there's much point as I doubt it gets a lot of attention these days.

4. I would need to find a replacement for Chat for XF2.

5. The style would not carry over - which isn't a bad thing - it provides the opportunity to create something fresh.

So, in summary, in order to upgrade we would need to:

- switch servers to something running PHP 7, preferably PHP 7.2.
- upgrade the forum software
- strip away all of the current add-ons
- purchase a new chat add-on (Chat 2 by Siropu [Paid])

Does anyone have any opinions either way?

Contributor
I bookmark ‘new posts’ and almost never use the hompage - only new posts, chat and occasionally the stats.

Agree a new styling could improve the site, but appreciate the slog it will take to re-jig everything.

Are you not able to try PHP 7.x on the current server or does it just have 5.x available? May be better to gradually switch stuff rather than everything (forum s/w, PHP version) in one go. Many hosting companies give you the chance to choose which PHP handler to use, and it can be easy to revert if it goes pear-shaped.

Staff Member
It wouldn't be possible to upgrade the current server to PHP7 and keep the site running - the server would have to be wiped, which would mean moving the files and database elsewhere while it is upgraded - so may as well just move once and be done with it.

I would still to do it in stages though - move the site to a new server running PHP 7, then put a plan in place to upgrade XF.

OTDB is something worth keeping but I understand the limitations you have. Feature threads is also nice but like vintly I almost always go to the new posts. I don't know if this forum is self-hosted or cloud-hosted. If it's the former, you may want to look into a cloud-hosted option. The cost of having something in the cloud makes sense for a business but it may not make sense for a site like this.

Contributor
I wouldn't miss the home page or feature threads. Chat is essential though for the races.
Could the OTDB simply have the data cut out and pasted into a thread?

I've added a poll to the thread to gauge how many do use it.

Staff Member
Premium Contributor
I think the feature posts and home page are used less and less these days.

I agree that the chat feature is used with much enjoyment during race weekends so that would be missed if it is not available.

It does seem that the need to upgrade the site out weights the loss of some peripherals.

1st of all hi brogan. Dont think we "met" as i came during your hiatus. & not sure why i feel abit intimated

Anyway im not the most technical & was like a foreign language

but i have bookmarked a home page of sorts but probally not proper one. So not sure where that puts me 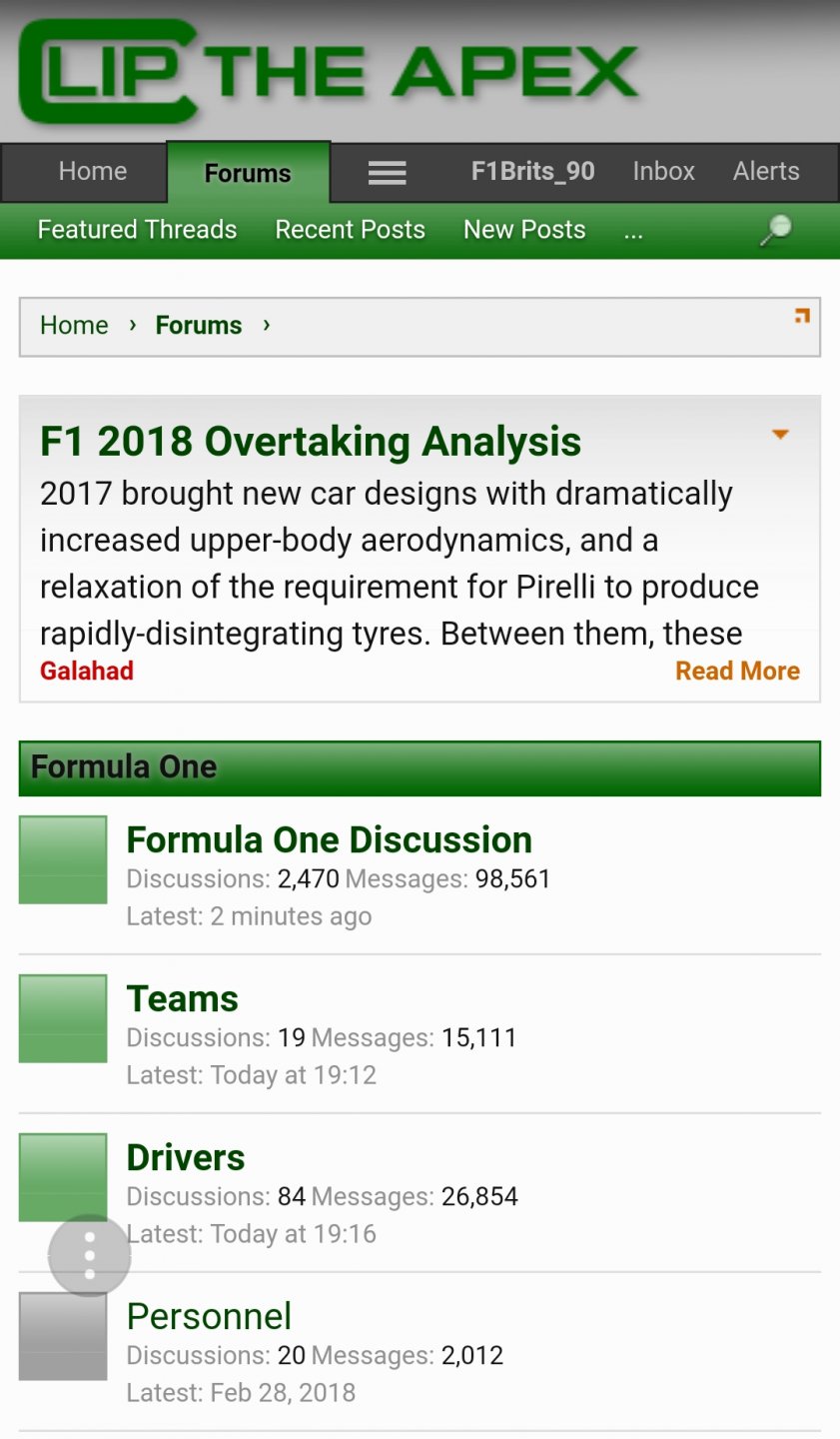 Staff Member
F1Brits_90 That's the forum index, which is typically only what most forums have: Forums

I wanted to create a home page so wrote the Featured Threads software, which does this: Clip The Apex

It sounds like it's not really used though and with XF2 we could create a home page of sorts with the latest posts, etc. so it's not a major issue.

No problem. I just found it easier as could get to all threads updates & new threads quicker

Contributor
I use it. Guess I'm old school.

I have a feeling the casual none commenting browser would miss it.

Premium Contributor
I do use the home page, mostly to navigate to New Posts or to Forums. However I always use it to read the next race feature, I’m not sure I would find my way there if it wasn’t staring me in the face. I’m also change resistant, I like the familiar. I think live chat makes the forum a bit special on race days.
Last edited: 5 June 2018

Valued Member
I coudl live without the home page but keeping the chat function would be very useful. Titch - the next race features would/could be on a "sticky" in the F1 Forum so you would still get a sort of notification.

F1Brits_90 said:
Dont think we "met" as i came during your hiatus. & not sure why i feel abit intimated
Click to expand

I'm with everyone else in that most things can be down without other than the chat.

Contributor
Oh and Brogan I owe about 5 years worth of subs so hit me up if the transfer needs cash.

Contributor
It's all Greek to me!
Do whatever's necessary, and THANKS Brogan!