Contributor
Jack Brabham, 3 time WDC has died at the age of 88. RIP Jack, you made all of us Aussies proud

One of the sports true greats with attributes only found during a wonderful past era. He will probably remain for all time the only driver to win in a car bearing his own name. We salute you Sir Jack.

Yep. Triple world champion driver as well as constructors' world champion. It seems unbelievable when you think about it and yet he did it. Never before and probably never again will we see such an achievement by anyone else.

And it's not just what he achieved with his own team while he was running it, everything his team did after the team was purchased, the titles of the eighties, the Gordon Murrays designs, none of them would have been possible had he not created the team first.

Valued Member
A damn fine innings for a racing driver ... 88yrs ... you have shuffled off this mortal coil into the great Eau Rouge in the sky ... but you will not be forgotten Black Jack ...

Premium Contributor
Much was made at one time of the fact that Jack Brabham was the oldest driver in F1. The result was that for one race he turned up on the grid with a white stick and dark glasses. That is the sort of happening that we no longer have in the sport, we were the better for having him and his like.

Bill Boddy said:
Much was made at one time of the fact that Jack Brabham was the oldest driver in F1. The result was that for one race he turned up on the grid with a white stick and dark glasses. That is the sort of happening that we no longer have in the sport, we were the better for having him and his like.
Click to expand


Was doodling around YT last night watching Ayrton Senna the prankster ... yes ... him ... who would turn up to drivers birthday celebrations and tip drinks over their head and rub cake in their hair before being chased out of the room by said driver with everyone laughing ...

Valued Member
A legend of the sport - it's sad when such a great passes on but he had a fine old innings. I hope his family are able to celebrate his life without too much sadness.

Valued Member
A great loss. Perhaps uniquely combined huge talent as both a driver and engineer - with due respect to Gurney, Penske et al. His contribution to Australian motor sport is incalculable and the third generation of the family is on the foothills approaching F1 this year. RIP.

Contributor
It would be difficult to overstate the importance of Jack to we Australians.

He was the personification of us in the 60s and will always remain a larger-than-life figure to us. Alan Jones inherited his mantle but, truth be told, was one-dimensional whereas Jack was multi-talented. Jack was not only a brilliant and tough driver, as was Jones, but was an astute manager and engineer. The most remarkable thing is that, in the latter capacity, he didn't let his ego preclude his recognizing that designing a competitive car while still driving was beyond even his prodigious abilities, (a realization that has escaped several other driver/team owners) so he hired Ron Tauranac to design the cars while Jack concentrated on the driving.. It was a match made in heaven.

Rest well, Jack. We Australians will always be grateful that you were one of us.
Last edited: 19 May 2014

Contributor
A true legend of F1. Even though he lived to the ripe old age of 88 it is still sad news of his death.

Contributor
I would also like to thank him for bringing us, through Gordon Murray, one of the most beautiful Grand Prix cars ever; the BT44.
RIP sir Jack.

Sad to hear, if not totally unexpected as he had been ill for a long time. I would rate him as a true great for all of the reasons expressed in previous posts, and I was disappointed to read Andrew Benson's BBC article, which was in places disrespectful and unnecessary. I sometimes wonder if he really follows F1 or just cherry picks from the net.

His achievements (Jack's not Benson's) are very unlikely to ever be matched.

Contributor
To be honest I didn't even know he was still alive, but still he had a good innings and he did something with his life which is more than I can say... 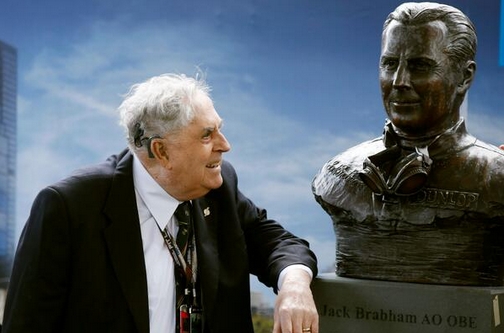 With a young team principal in the making...
N

Contributor
RIP Jack Brabham, one record you will likely hold forever is the incredible achievement of winning a Formula 1 WDC in your own car. Truly amazing.