Valued Member
It is because of the legend of Ayrton Senna that winning 41 Grands Prix has become a key milestone in the career of the great Formula One drivers. On his death in 1994, Senna stood in 2nd place in the all time list, with 41 wins. This has only now been matched by 3 other drivers, with the promise of a 4th to come?

ALAIN PROST (1990 Mexican Grand Prix, Ferrari)
It was a weekend of celebration for Senna, who marked his hundredth Grand Prix start. Prost, qualified 13th. Although Senna started 3rd, he typically took the lead soon after, for a one-two that Berger failed to maintain with his underpressured tyres. Prost's low downforce set up meant he had passed the Williams into 4th behind Senna, Benetton's Piquet and team-mate Mansell by mid-race. The Ferraris got past an ailing Piquet, and Prost capitalised on backmarkers to get past Mansell. The race was decided when Senna's tyre problems were diagnosed as wear, rather than a slow puncture. Both Ferraris got past before the tyre blew.
So Prost, already the record Grand Prix winner by a margin, took victory in Mexico, his 41st and Ferrari's 99th. It would be the start of a three race run which challenged Senna for the 1990 title, and ended in Senna's most ignominious moment.

AYRTON SENNA (1993 Australian Grand Prix, McLaren)
1993 saw McLaren-Ford way down on the performance of Williams. Senna was fed up of not being in the race winning car, so had decided to depart to find one at Williams. Of course, Senna was able to take some victories that year: a wet pair at home at Interlagos and famously at Donington, his traditional victory in Monaco, and another damp victory at Suzuka. And the last race was at a street circuit...
Williams had taken every pole position of the season up to Adelaide, but suddenly street-circuit Senna was 0.4s quicker than both down under. He was 0.7s clear of his team-mate, Mika Hakkinen, whose qualifying skills would later be proved. Senna's run to victory was not straightforward - he misheard a pit call and pitted early, necessitating an unplanned second stop, which was rendered moot by the fact Williams were also on two stops. After a long middle stint, Senna beat the Williams out and beat Prost in the end by 9 seconds.
Famously, on the podium Senna dragged Prost up to the top step to start their reconciliation, and mark Le Professeur's retirement. Prost's last podium, sadly, was also Senna's.

MICHAEL SCHUMACHER (2000 Italian Grand Prix, Ferrari)
Schumacher won his 5th Grand Prix on the fateful day of Senna's death at Imola. He took 19 Grands Prix for Benetton in his four-and-a-tiny-bit years there, and then moved on to Ferrari. Despite not taking any titles, he'd taken 14 Grands Prix by the start of 2000 in four futile tilts. He came to Monza 6 points down on double defending champion Mika Hakkinen, with only one win (and three finishes) from his last seven races.
The two Ferraris were a barely separated one and two on the grid in Schumacher's favour.
There had not been a death to anyone in F1 since Senna's passing, but as Schumi lead away, a huge crash at the second chicane lead to the death of marshall Paolo Gislimberti from flying debris. A 10-lap Safety Car period ensued, and Schumacher's restart was enough to catch out Jenson Button. Hakkinen struggled with a balance problem up until his sole pit-stop. He fixed it there, but it meant he had to catch and pass Schumacher. He couldn't. The emotion of that win was evident as Schumacher cried at the press conference, comforted by his rival Hakkinen. For Schumi, only 50 wins remained!

2015
Again, Vettel's 41st win was achieved in the tragic circumstances of the first race since Jules Bianchi eventually succumbed to his injuries. 2015 started with the German on 39 wins and Lewis Hamilton on 33 - but with the Briton in a much better car the race was on. A win in Malaysia got Vettel to 40, and Hamilton had got to 38 by the time his start issues re-occurred on the line in Budapest. For all the craziness that occurred behind the Ferrari, Vettel was controlled enough to take the win, only a Safety Car stopping the race looking like something from late 2013.
So 15 years after a driver got to 41, could two do it in a year. For Sennaphile Hamilton, it is interesting to note that victory in each of the next three races pulls Hamilton up to 41 wins from 161 Grands Prix - the Brazilian's final tally.

Does it matter? Probably not, but so many F1 drivers measure themselves against Senna, added to the tragedy of his demise, ensures that his tally will always have an emotional resonance for them. Now, about those 65 poles...

Valued Member
A little more statistical context. Prost took win 41 in race 160, Senna in race 159, Schumacher in race 142 and Vettel in race 149 of their respective careers. Given the drivers Prost and Senna were up against and the (often) more competitive field in relation to the cars it shows (to me at least) the qualities of those two men as drivers of F1 cars.

Cars are also more reliable these days so if you've got a good car, chances are your stats are going to be better than 20 years ago when you could have multiple mechanical failures throughout a season.

The current day Senna v Prost is Lewis and Seb ... 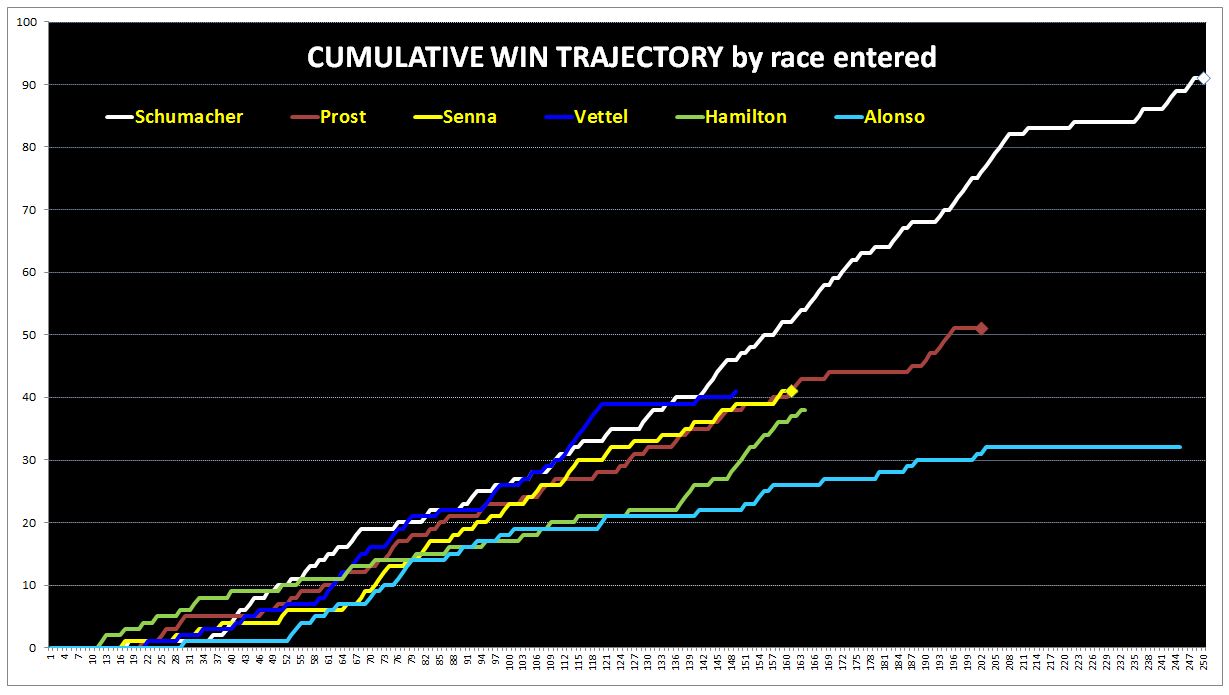 Alonso seems to have 'FlatLined'

Here's an interesting one regarding Hamilton........

"Intriguingly, should Hamilton win the first three races after the summer break, then his F1 record would be exactly the same as the great Brazilian's, -41 wins from 161 starts."

Lewis always claims the statistics are of no interest to him ( championships aside of course) but think that's one Lewis would adore!