Valued Member
Having started winning again at the start of 2014, Lewis Hamilton has pointed out that the trophies recieved by those lucky podium placed drivers are not very good. This is a repeated claim from Hamilton, after he complained in the podium interviews at Silverstone last year that he was receiving a selection of red pipes rather than the traditional winners' trophy at the British Grand Prix. 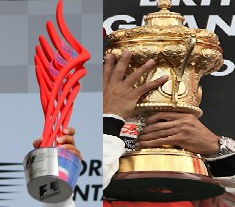 It was Hamilton's point that Grands Prix should have desirable and historic trophies for victory, rather than having a plastic version of a sponsors' logo as the reward. I agree: I find it difficult to believe that Formula One could claim to be an élite sport with trophies that scream out Poundland. Since the Monaco Grand Prix is sold exclusively on wealth and prestige, why is it giving out this trophy?

Some of F1's trophies do transcend crap, admittedly, and achieve a level of genius only the truly awful could attain:

However, what can this possibly doing to the image of an elite sport? The fact the trophies are awful gives the image of doing things on the cheap, and they are actually spending huge sums of money to do so. A great trophy needs only be smelted once and it can be brought back repeatedly. A great example is the Wimbledon singles trophies (men's shown): 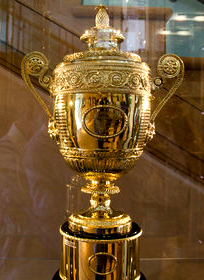 It is bizarre in a way. It has a pineapple on top. Players must leave it at SW19 and take home a replica. But it means so much because (a) it looks the part and (b) it has been lifted by all of the greats (apol. Ivan Lendl). Think of all the great sporting trophies: they're not one-offs and they're special because of what they represent!

Hamilton wanted the RAC trophy he couldn't take home more than the one he could. It would improve F1's image for more to matter - for trophies to be started now that return each year, and look and feel special. What does it say about a sport that its champions laugh at its trophies?

I'm going to respectfully disagree about the 2015 Austrian GP trophy being awful - it's simple, it's not gaudy, and it'd look really nice hanging on the wall as an accent piece for the trophy room. It would stand out for its uncommon material and simplicity. It's natural, it's local-sourced wood, and it has more to do with Austria than some gaudy piece of gold or silverware does. That's a trophy I'd want to win. Does it fit with F1's image? Possibly not, it's got a local and sustainable vibe to it that would actually better suit Formula E.

However, the other modern trophies are pure crap, and it really doesn't reflect well on F1 that it's handing out such awful trophies. While I understand the sponsors' desire to plaster their names over everything, they already get all the armco, the walls over the pit lane and around the podium, and some of the ground itself, to do their advertising. It's commercialism gone crazy - to the point that it's ruining TV footage of F1 by having long focus shots instead of close-up action shots, and it's absolutely sickening.

However, those big pieces of gold and silverware are just plain ostentatious - if F1 is claiming to be green at all, those classically styled trophies say the exact opposite. From a marketing standpoint, with thought toward the lowest common denominator, that doesn't jibe with F1, or its sponsors, claiming to go green. If F1 would ditch the eco-friendly claim, which is utterly unsuited to F1's history, and sounds like nothing but a bold-faced lie from teams that spend a small country's GDP to go fast around a track, and instead focus on its roots - brave people going fast, and getting rewarded handsomely for doing it better than anyone else - they could have their ostentatious trophies and stop worrying about offending the 'green' audience they're trying to court. If people want green racing, they've got Formula E.

Whatever happened to the winner's trophy at the 1989 Italian GP? The one Prost "gifted" to the the crowd below to piss Ron Dennis off even though he said that wasn't his intention (

Did it ever re-surface again? Whoever has it now would probably be sitting on a small fortune?

Valued Member
Couldn't agree more. Particularly irritating when one of the historic events (Silverstone, Monaco, Monza, errr, that's it - thanks Bern) resorts to this. Ideally, the cup should be a of a shape and size to obscure the jockey-sized drivers completely unless standing on the podium.

Exhibit A: Tazio Nuvolari wonders whether he has a shelf to accommodate the Vanderbilt Cup:

Listen to Clive James's deadpan comment on Mansell's trophy in the last 3 seconds of this clip:

Valued Member
Niki Lauda used to give his to his local garage in exchange for getting his car serviced. To some drivers they are important, to others clutter they could do without.

It just shows what a tight arse he must be. "Here guv' will you take these instead of me actually paying you?"

2nd place is just the highest placing for the losers - what do they expect?

Get over it, and if having a crappy bit of plastic tat shoved in you hand spurs you on, so much the better.

Winners' trophies are a different matter, should be 'proper' but handed back for following year with replica to keep.

Dash Racing said:
I'm going to respectfully disagree about the 2015 Austrian GP trophy being awful - i
.
Click to expand

I agree I liked the Austrian idea, to mske it from the surrounding woodland. But I dont mind the sponsors trophies for 2nd/3rd & constructors but the great part of trophoes like British gp, Wimbledon, fa cup is the history & heritage of it where you can look down the famous names