All in all it was a reasonable success, the predictions were on average out by just 3 positions, and I think it could of been even more accurate if it had been a dry qualifying session.

So with another years worth of sand bagging data and everything crossed for a dry qually in Melbourne I thought it would be a bit of fun to have another shot at making some sort of sense out of the chaos that is winter testing. 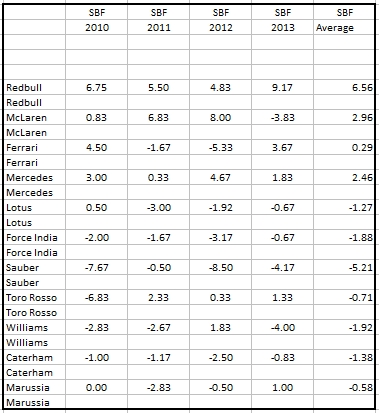 You will see from the above it is the top teams Redbull, Mercedes, Mclaren and Ferrari that really sand bag with Redbull in particular consistently looking shit in testing and then blowing everyone away in Qually. Where as Sauber seem to run around every year on petrol fumes trying to look good in testing whilst forgetting they should maybe set the car up at some point for the first race.

So with the first test over we can apply the sand bagging factor to the Jerez testing results giving us the SBF adjusted test result. 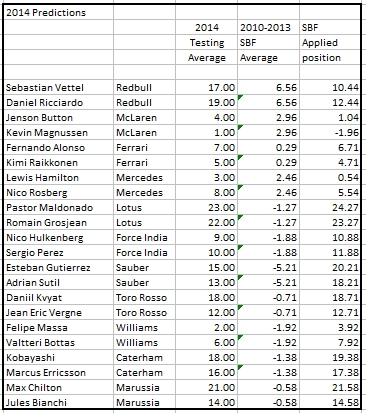 And to put that into a grid position format, the initial predictions after the first test are as follows. 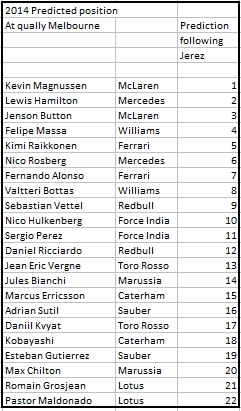 I will update the SBF predictor after the Bahrain tests.
But initially you have to say that if you have a Mercedes engine your looking good, even with a 3 place error margin.
Last edited: 5 February 2014

Contributor
Interesting stuff Greenlantern101 and apart from a Red Bull/Enstone up swing before the season starts its probably not too far away.

Its interesting that the Ferrari powered cars other than Ferrari are not coming off too well. With the smaller sidepods I'd thought they may have been on to a winner.

I do think Williams always flattervto decieve in testing too but would love to see Massa up there come Melbourne.

Contributor
Lotus is a tricky one. Not much I could do for the first test as they weren't there.

Ignoring test results and taking into account Lotus's money troubles, departing staff, addition of a not-so-good driver, I don't think they're going to be as strong this year.

Contributor
Yeah but they could do a Brawn and land their own version of the double diffuser ala their innovative two pronged wing. You certainly can't use money to legislate for the competitive order this year

They could - but that Brawn car was one of the most expensive cars to develop in the history of F1 so the likelihood of success even with having a different engine shoehorned in at the last minute was fairly high there. I'd love it if Lotus did a Brawn though!

Contributor
Lotus do have a history in recent years of thinking outside the box. Their DRS system was unique, the nose this year is unique. I hope they have something up their sleeve because they need a quick car to get themselves out the dung heap they are in financially.

Half the cars will stop midlap because of unreliability, then fans will be complaining more about the new regs, commentators won't have a clue what's going on and we'll end up with Max Chilton on pole!

rufus_mcdufus said:
They could - but that Brawn car was one of the most expensive cars to develop in the history of F1 so the likelihood of success even with having a different engine shoehorned in at the last minute was fairly high there. I'd love it if Lotus did a Brawn though!
Click to expand

Really? Are you talking about the money Honda pumped prior to calling it quits or the last minute Brawn package that saved the team. The last minute engine deal with Mercs was major factor and would've stretched already low funds further. I certainly believe their strong competitiveness was down to Ross finding a loophole in the law and less to do having copious amount of cash at their disposal.

Valued Member
It was a very expensive car. although, a lot of the money was spent on the KERS, which was never used (one of the reasons I am enthusiastic about Honda's return!)

It was widely rumoured that the Honda/Brawn car was the most expensive ever developed in F1 at the time, but of course this is hearsay and rumour, so I limited to claiming 'one of the most expensive'! It was down to the money Honda pumped in the year before rather than Brawn who operated on a shoestring.
http://www.autoevolution.com/news/brawn-gp-has-the-most-expensive-car-in-formula-one-8202.html

Valued Member
Lotus are in the Brawn position of having sod all money, a set of new regulations, no sponsors and...

And sod all money the year before too so it's not great. If they can maintain the performance they had in 2013 I'll be seriously impressed.

Contributor
Update for the predictor following the Bahrain test.

First the testing averages. I have taken Lotus's average as being only Bahrain results discounting the no show in Jerez. 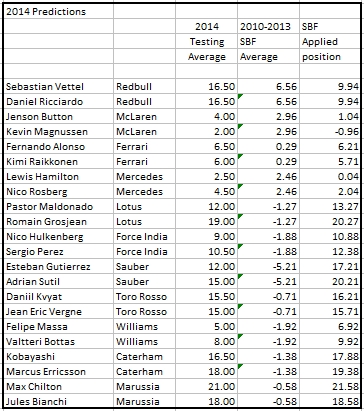 And in a grid order. 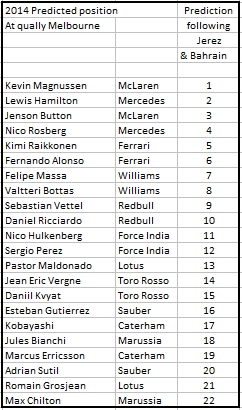 It is rather surprising to see the Redbulls as the 5th best team despite applying the huge 6.5 place sand bagging factor. What as shame.

Interesting to see how they do in the final test.

Contributor
The top 8 look plausible. However there's no way that grosjean will be struggling at the back while Maldonado is mid table.

Contributor
Agreed. I would hope the final test will help the Lotus average stabilise in a more realistic position. Typically the final test you would expect most teams to try a qually type run on full engine power, including RoGro.

Contributor
Max Chilton still keeps his record of last! Get in there Max!

Looks a good grid to me Greenlantern101. Can't wait for Massa/Alonso in the first corner.

I reckon Grosjean will be just about top ten in reality.

Contributor
yeh my guess for lotus would be just behind the force indias. The Hulk is hoping for that as well.

Contributor
Isn't "KMag" fertilizer teabagyokel? And so it is your way of saying "shit" either as an expletive or just a comment about a post?