FOTA VIP, I've got the avatar to prove it :)
Contributor

The more I hear Jackie Sterwart, the more I think that Max Mosley's opinion of him was correct.

Jackie Stewart alot like Murray Walker absolute legend & a huge part of F1. but both have a long running distain for Lewis Hamilton for some unknown reason

im not disputing fangio & clark quality because enough people from that era. speak of how good they were. but anyone under 50 - 60 judging anyone before 1980s is tough because there was almost no tv coverage. out of 10 drivers that have won 3 world championships & above 7 you can watch there archive races. get an opinion. but Fangio Brabham Stewart you had to be there

Another statement by Jackie Stewart regarding Hamilton did not go unnoticed by other well-deserved people.
This time, Jody Scheckter disagreed with his colleague's point of view.

Valued Member
Step 1: Select Opinion
Step 2: Try and find as many spurious reasons as possible to support this opinion

Lewis would say these comments say more about Jackie Stewart than about him.

Jackie Stewart almost stopped competition with his safety campaign, not saying it was overdue, but some of his campaigns on armco could well have killed a few that without them may have lived, lots of thought on car engineering but little on how to improve safety of tracks. He turned the races into processions with don't do this, no overtaking on the outside, in my opinion his last WDC was more about his unwritten rules rather than his driver skill, he struck lucky, most of the real competitionwere killed or injured over his 3 WDC's.
I always discount Fangio as his WDC'S were when the driver could change cars, had the one car rule been in place I'm not sure he would have any WDC's. Clark was an oustanding driver, 2 WDC's rally champion, saloon car champion, Indy 500 winner all when campaigning in F1, had he not died in a stupid F2 race he would have had at least 3, Graham Hill won in 67 and was Clark's team mate that year, today is a different world, so Lewis could well be the best ever F1 driver ever, others in the past were the best drivers of their time and Clark the best of all, if you want to be GOAT driver then you enter all forms of motor sport. Jackie Stewart was never the brightest of drivers but was certainly very political and used that to further his career even after he retired

Valued Member
Going off topic, but if winning in different categories is the measure of the best driver then Mario Andretti wears that crown.

I'm no fan of Lewis and the way he conducts himself off the track but since he arrived in an F1 car he has clearly been the best driver on the grid. That was obvious from the first corner of the first race he took part in. When he beats all of Schumacher records he will become, defacto, the greatest of all time using the only reasonable metric, races wins and championships. It will be some time before anyone gets close to achieving what he has achieved and to keep the focus he has for over 12 years is staggering.

Staff Member
It's incredible to think that for the sake of the odd point or race here or there, he could be approaching his 9th title.

Brogan said:
It's incredible to think that for the sake of the odd point or race here or there, he could be approaching his 9th title.

no doubt but Ron Dennis in Shanghai & why he never pitted on tyres that didnt just fall off the cliff. but crashed in firey mess. he could be 7 time world champ now. 2016 probably not as nico did drive well & lewis had a dip. nico in Japan got to the point where he didnt need to win any of the final 4 & could finish 2nd

Contributor
How can someone be the GOAT when they have been beaten by two teammates and tied by a third? Since the turn of the century, the only reasonable metric to judge a driver is by comparison with their teammates as the disparity in equipment throughout the grid makes any other comparisons meaningless.

siffert_fan said:
How can someone be the GOAT when they have been beaten by two teammates and tied by a third? Since the turn of the century, the only reasonable metric to judge a driver is by comparison with their teammates as the disparity in equipment throughout the grid makes any other comparisons meaningless.
Click to expand

Tied with THE REIGNING WORLD CHAMPION IN HIS ROOKIE SEASON, and do I need to mention Japan?

I appreciate that everyone is entitled to their opinion, and reasoning I guess, but Schumacher was beaten by Piquet, Rosberg and Irvine (I Know!)

Sorry, I am not the greatest fan of Lewis Hamilton, in a similar vein to FB but it is impossible to look at what he has achieved in the sport, that he is still right at the top of, and not doff your cap. His record, without a shadow of a doubt will define him as the greatest, until the next great comes along to beat it.

Although the way F1 is going, I don't think that there will be enough seasons left to beat them.

Staff Member
Premium Contributor
I was trying to list the number of World Champions who hadn't been beaten by a teammate and it is a very short list.

Even Jim Clark isn't on it. (Beaten by Innes Ireland in 1961 fact fans)

Contributor
It always seems to be that whatever record Lewis Hamilton breaks there always has to be some sort of caveat involved. He’s in the best car, he teammate is rubbish, put him in a Williams and see how he gets on,anyone can win in a Mercedes.
I think that FB hit the nail on the head that Lewis Hamilton will be the greatest of all time,as his race wins and Championships will be greater than any other driver in history.

cider_and_toast said:
I was trying to list the number of World Champions who hadn't been beaten by a teammate and it is a very short list.

Even Jim Clark isn't on it. (Beaten by Innes Ireland in 1961 fact fans)
Click to expand

The teammate one always makes me chuckle as even the great Fernando Alonso was beaten by Tarso Marques in 2001.

Staff Member
Premium Contributor
I get that it makes for an easy comparison and the first driver any racer needs to beat is his teammate but its not always as clear cut as that.

cider_and_toast said:
I get that it makes for an easy comparison and the first driver any racer needs to beat is his teammate but its not always as clear cut as that.
Click to expand

Staff Member
Premium Contributor
Right, that's half an hour of my life I will never get back.

As far as I can tell, the only F1 world champion never to have lost to a teammate across a full season is Alberto Ascari.

Every single F1 World Champion from 1950 until the present day has been beaten by 1 or more of their teammates apart from the double title winning Italian. 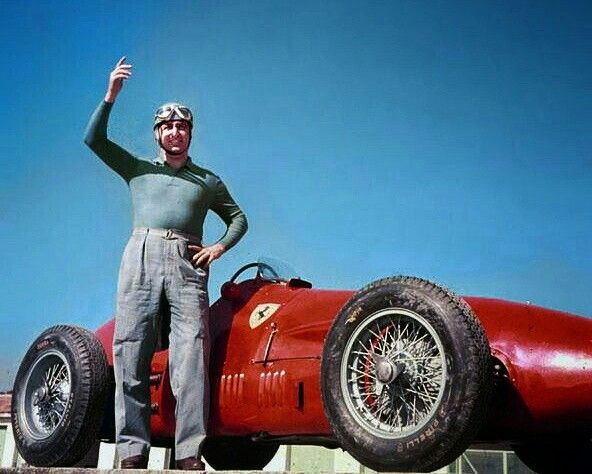 R
When does "real" F1 racing start for Hamilton ?