been a nightmare to post on this thread because with work world cup then F1 & F2 triple header by the time I found time to watch the F2 races it been old news as the next 24/48 hrs they are at the next race. but France feature was brilliant was drivers on dry tyres having to tip toe in the wet conditions as it wasn't wet enough for full wets & dry line had appeared with 10-12 laps to go. Austrian feature was really entertaining, like I seem to say after most F2 races its proof that its not circuit that's the problems with the expection of spain which was dreadful even for F2. how come we can have brilliant race In F2 but F1 can be poor. but great racing that final lap from markelov was stunning from 12th to 8th with 3 in 1 corner. Merhi deserves a bit of praise 2 great drives through the field in consective weekends to finish 3rd & 4th.

great to see a british 1-2 in the championship battle. even if Norris is in abit of a slump currently & George Russell really impressing me, as came in with a big reputation with expected title battle with lando Norris & took abit of adapting in 1st 3 races but has been brilliant since leading the championship by 10 points, taken the last 2 poles, 4 wins & a 2nd in last 9 races. but struggling to place him on 2019 grid as if Bottas is staying that locks Force india as Ocon & Perez wont leave. so maybe Williams at a push but then weirdly the most famous british team dont hire brits wasn't the last british driver jenson Button in 2000

Is not ironic that ever since there was mention that Lando Norris was going to be considered as a replacement for Hartley .. he has endured a slump in form?

i agree at the time it was logic & reason fighting because i would assume if he wins F2 then he will be on the grid because of toto wolff but struggling to find a place for him, although the perez to haas rumours would open up that spot for him

also interesting was watching some GP3 for the 1st time this season saw few kids in there we had Pedro Piquet & Giuliano Alesi. interesting to see if they ever make the leap to F1 at some point. also saw a finnish driver called kari do a wheelie out of stowe, which i bet it hurt, coming down to 4 wheels 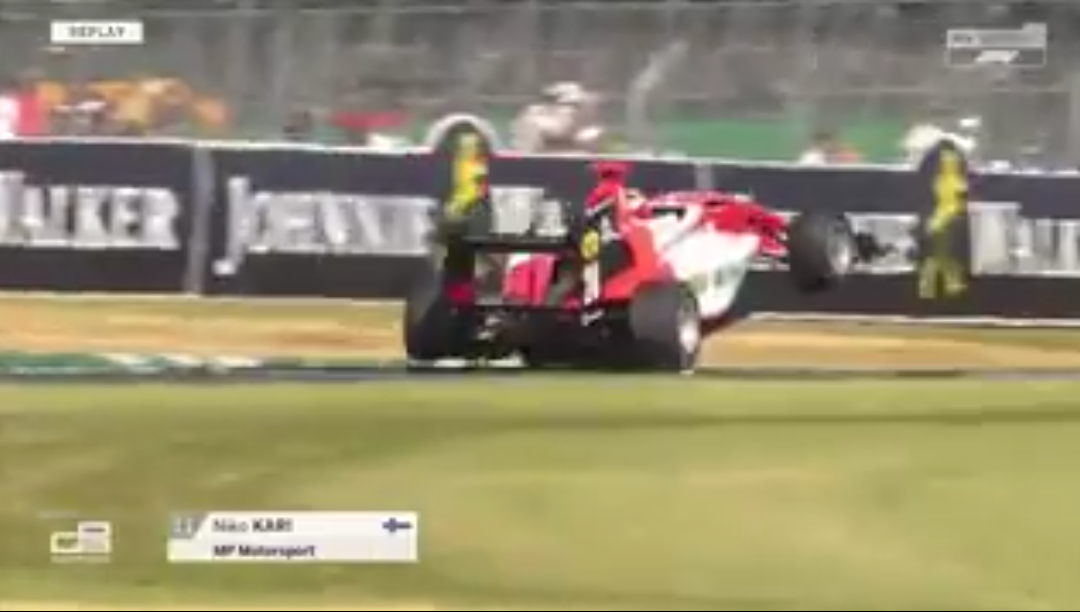 i haven't seen the sprint race yet but i have come across the news & that the haas development driver may have put a huge dent in motorsport career. because Ferrucci again Maini off the road at T4. Then on the cooldown lap, he drove into the back of his teammate in a move which looked rather deliberate. Ferrucci was summoned to the stewards as a result. He decided not to attend either hearing, so stewards without him disqualified from the race & for hitting Maini after the race effectively using his car as a weapon the American driver has been banned from the next two rounds at the Hungaroring & Spa (therefore missing 4 races) and has been handed a €60,000 fine

& if i being honest he might be banned for the next 2 rounds but if he drives for trident or in F2 again this season. ill be amazed 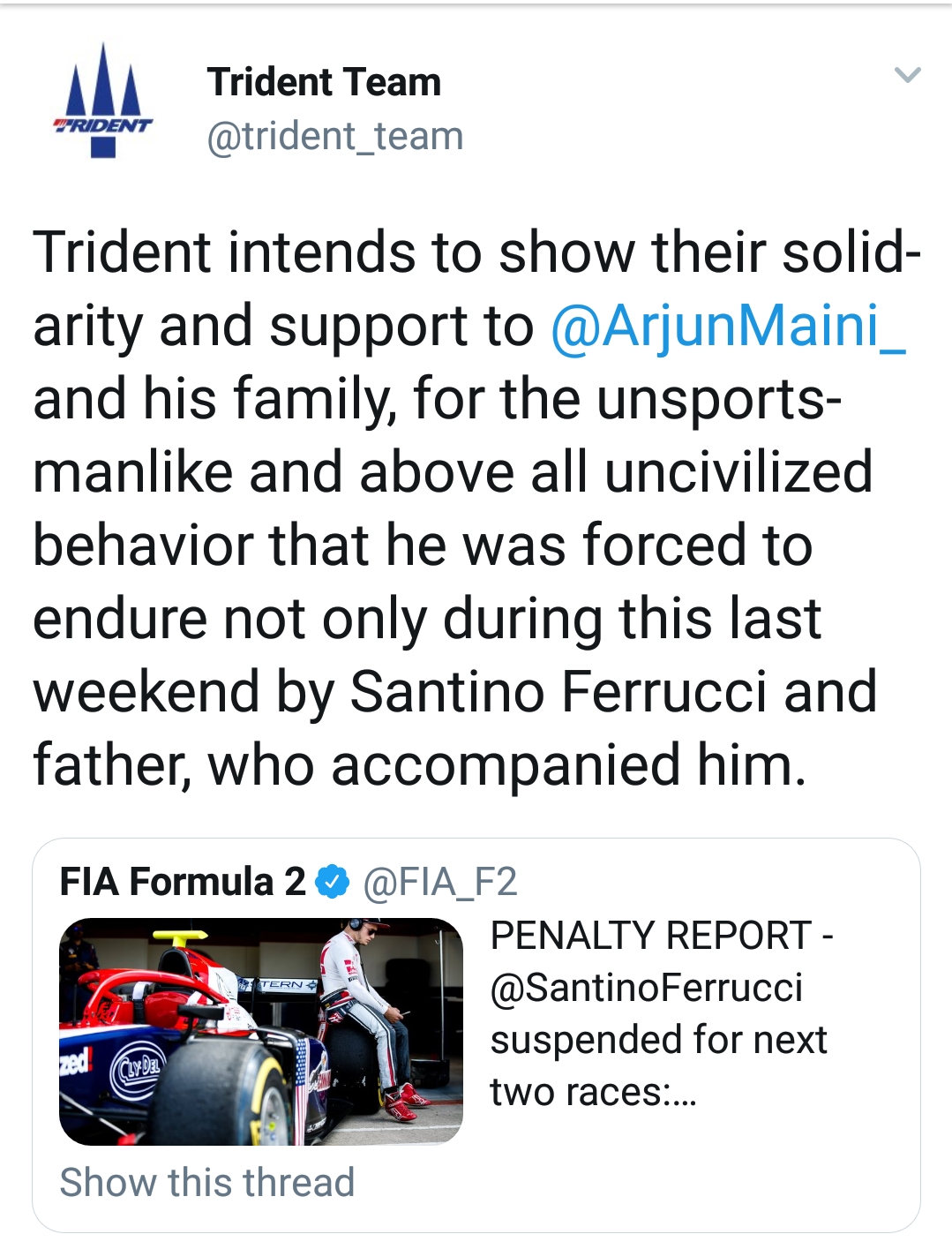 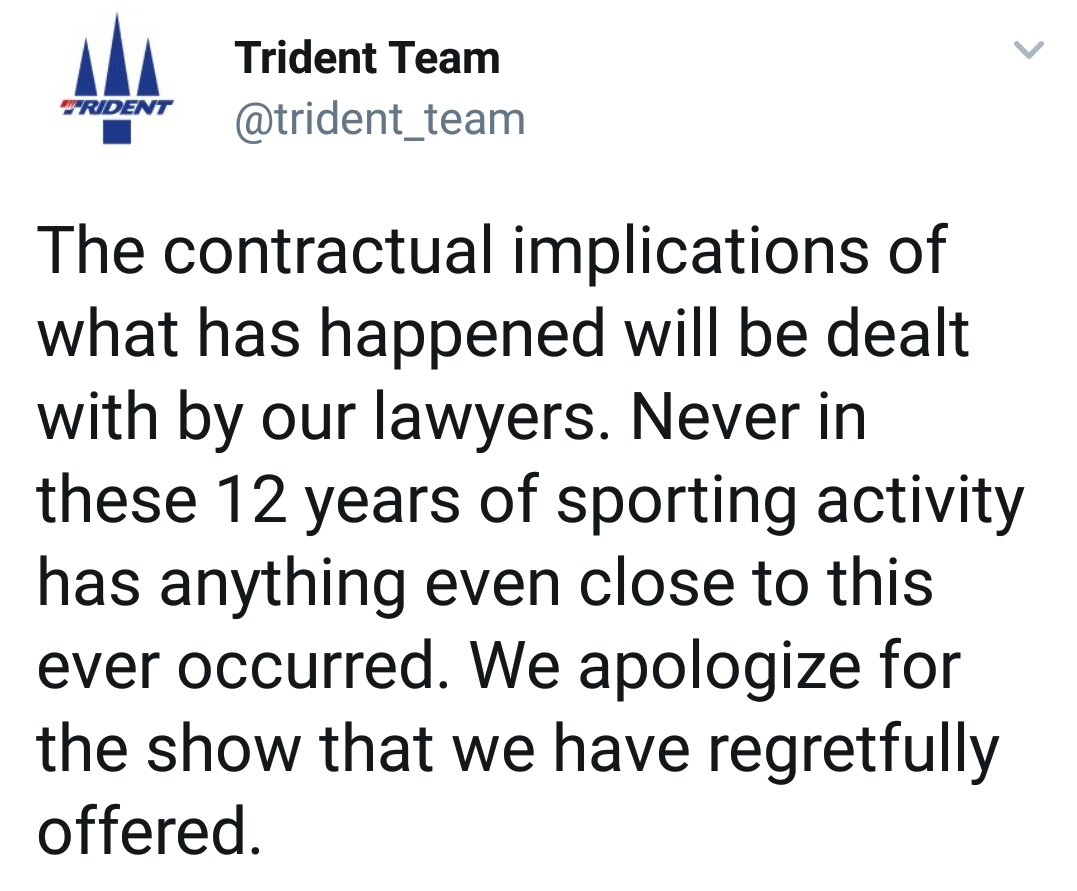 F1Brits_90 I find the whole thing bizarre and ugly reading it this morning, We;ve had teammates take each other off the road but it appears Ferruci has hit the self destruct button to the point he actually wants to kill him. He;s been banned for 4 rounds but I think his career with the team and possibly as a future F1 driver over.

Judging by the statement of the team's lawyers

This is seriously nasty and totally uncalled for

deserves everything he gets .. which is nothing committing career suicide in just one race weekend

Just look the condemnation he is receiving , he must be hiding in a hole
He will be deleting his twitter account soon

Worse he wanted to promote Trump's views on his car

Its nuts because 12 months ago at budapest he came with great potential. He was going to fill the American tv driver & sponsors. Haas have been looking for. If The twitter rumours are correct of them mocking him imitating his accent then. Hes finished as racism is unacceptable at any point. The team radio situation seems to be abit where he has gone past what was acceptable & funny. Because that team message was funny, i would expect he expecting some stick over it as its just being male. But if ferruci didnt stop at 1 get bringing up everytime he moaned it went past a joke.

But as i say hes finished possibly. Because if your a winner in any sport. You can be forgiven as winning can change opinion very quickly. If hypothetical alonso did this but then hired by mercedes. Start big outcry but then when he was winning races. It would silence alot. This guy is terrible finished inside top 10 twice in 16 races

A grovelling apology about having mental lapse and being Italian american and embarrassing everyone from his fans, friends and family and for not attending the stewards to explain his actions . Too little too late as he did not even apologise to his teammate and his family

Refusing turning up to stewards is a huge no no. No wonder he had the book thrown at him for me along with alot of others. Thinks this was his agent's word or his way at trying to salvage any career

a bit belated but pretty obvious given how Ferrucci has had to delete a lot of tweets about his misdemours at SIlverstone last week. Now it has further emerged that he failed to meet sponsorship payments to the team citing money trouble but at the same time was able to fund participating in an Indycar races.

All I can see is

and adios or arrive verdici

. Even Indycar series should not employ him

spot on decision, i assume that haas wont be too far behind espically as management company has also dumped him, but i thought at the time ferruci that would miss far more than 4 races. as it was canamasas level & if he raced again that season i would be highly surprised. i would assume Nascar is his next step. but it was just a cocky rich guy who has got his comeuppance

& as you say the money is really weird one

I thought as i have the time. I would refresh this that tomorrow at 3pm & sunday at 9.15am the penultimate round of the F2 Championship kicks off. Mathematically Russell Norris Albon De Vries Markelov & Camara can win it with 80pts on the track 4pts for abu dhabi pole & 4 x 2pts for fastest laps

But realistically i would say its down to just the 2 brits Russell who could be at Williade Vriesms & Norris who will be mclaren. Their is alot of symmetry to main series because mercedes development Driver barring any mechanical issues & crashes is in the pound seats because with a 22pt lead he almost has the luxury of following Norris home in 1-2s & title would be his because Norris needs almost a a double podium with a feature race win. Because 1st & 2nd might not be enough with 7pts feature / 3pts sprint between 1st & 2nd

Il_leone said:
I think its important for George Russell to clinch the title tomorrow to make Williams think about seriously signing him
Click to expand

I think realistically it will be abu dhabi, because it is mathematically possible but unrealistic as would require a lot of bad luck for Norris. because there is 92pts still to play for as I was saying above. if Russell won the feature race & Norris retired or finished outside the points, then Russell would be 47 pts ahead with 65 remaining, & all he would to do is finish in top 6 ahead of Norris in sprint & it would be title won as would be 49/50pts ahead with 48pts to go

Well just watching the feature race & i wasnt expecting that but all bad luck i saying Il_leone Norris would need he seemingly got. It really was worse case scenario starting 2nd, dreadful start back to 5th. Overtaken back to 8th, then went to wrong pit crew & then at eventually pitstop, 3 wheels on wagon as jackman wasnt paying attention & his title hopes are all but impossible would require a perfect weekend. russell to not score any

Markelov was outstanding 19th to 1st in 6 laps was amazing. Proof of how good 1 was & other wasnt Norris on front row, markelov back row by lap 4. Markelov was ahead on merit. Just a shame that his russian time they couldnt have had a worse pitstop if they had tried. Cocked it all up for him

But im intrigued by the sprint race & how they going to do it without a pitstop. As 22 laps on a set of softs seems impossible. As they jumped off the cliff by lap 18
Last edited: 2 October 2018

Just finished the fascinating sprint race, i doubt at mclaren he could have a worse weekend if he is there for next decade. Wondering whether the lando on flight to Russia smashed a load of mirrors by swinging black cats as to start last, up to 12th. Stop/go penalty back to last, then DNF through a puncture. While his ex title rival won. Every time he thinks it cant get worse it did. It is almost laughable how bad it was

But it interesting now for the title battle russell is 37 pts ahead of Albon & 51 ahead of Norris with 48pts remaining (25 feature, 15 sprint, 4 pole & 2 x 2 fastest lap) so russell could effectively secure the title in qualifying with pole if someone else takes fastest laps as he would be 41 ahead with 40 remaining. But without bonus points he needs 6th in feature race to win title. Unless Albon finishes 2nd (no pole) or 3rd or below (with or without pole) then russell is champ regardless

Here I am wondering what has Albon done wrong to not deserve a shot at F1?

Il_leone said:
Here I am wondering what has Albon done wrong to not deserve a shot at F1?
Click to expand

same as 90% of all the talented younger drivers on F1, he & the Nissan boss said as much when he announced his move to Formula E. with his boss saying "I really wanted to have him because sometimes I am so disappointed to see talents not going anywhere because of financial issue"