How come this man doesn't have his own thread yet?

DC is a true Gentleman and a credit to the sport we love. If it wasn't for him pushing for Safety in the 90's and 00's and even now when he's retired, we would have seen more deaths in F1 after the very sad weekend in San Marino back in 1994.

DC was always the nearly man when it came to his F1 career piped to the title on more than one occassion by either Hakkinen and Schumacher. I wouldn't say DC was a number 2 either in his career.

DC in his 247 Grand prix starts scored 13 wins, 62 podiums, 535 points, 12 poles and 18 fastest laps. DC at this current time is the all time points record holder for a Britain in F1. Can Hamilton or Button break his points tally of 535?

Coulthards entry to F1 was under pretty awful circuimstances he was the driver that replaced Senna after that horrible San Marino GP in 1994. But in his time in F1 his teammates have been Damon Hill, Mika Hakkinen, Kimi Raikkonen, Christain Klien, Liuzzi and Mark Webber.

In 2008 after a 14 year stay in F1 DC decided to hang up his driving gloves and ended his F1 career on the first lap of the Brazilian GP.

Over to you guys to debate about DC then!
Click to expand

Contributor
Never rated him. Nice guy, quick enough to be in F1 but only at the top because of the car. In my mind he was like a slower Webber, made to look better than he was by a quick car. His inability to get past the first corner became something of an embarrassment. 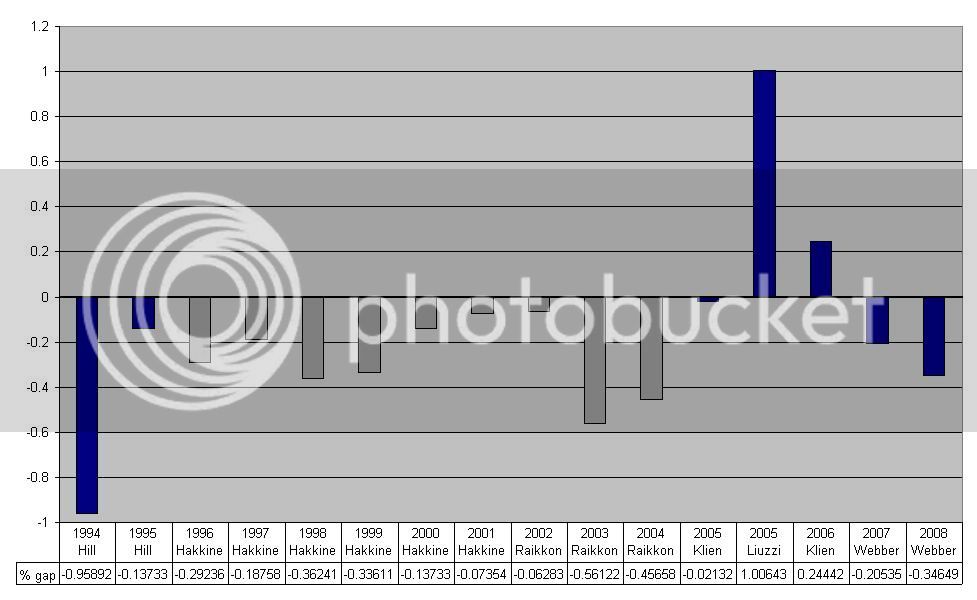 Contributor
Never really rated him - apart from when he famously 'flipped the bird' to Schumacher after overtaking him.

Oh, and don't get me started on the last few years. The pro Redbull bias espoused by him at every opportunity makes me want to throw things at the telly. He has calmed it down a bit since the commentating took off in earnest though, thankfully.

Valued Member
He's another one who hung about for at least 2 seasons longer than he should have done. My main problem with DC was that he expected people to be as nice to him as he was to them - taking the Australia incident with Hakkinen as an example. Nice guys don't finish first in F1 and he always lacked that killer, ruthless streak to make him a champion.

Also, not sure he got the best rub at either McLaren or Williams as he was always teamed with drivers who were defacto No.1's even if not contractually. Had moments of brilliance, just not "bad" enough.

). Not too sure about his talent to be honest, he's not really bad though, seeing how he stuck around for such a long period of time.

When he was in F1, I always thought of him as shit I don't know why, but my opinion has been changing ever since he retired. Looking back at his years when he was in his prime, he was quite unlucky, his prime being 98-01. As was said, he was always paired by drivers who were defacto No.1's even if not contractually.

I always remembering him always right close up on Mika's gearbox in their time, it was always the two McLaren's with a Ferrari in the mix. I think the main reason why he lost out to Hakkinen was probably qualifying, plus he didn't have the "champion" instinct. But he really wasn't that bad, he won 13 grand prix's and some of them being at driver tracks, could he have won more with the McLaren reliability?

As you said in your opening post Hammy "I wouldn't say DC was a number 2 either in his career."

Think he stuck around in F1 for a season or two long, I found his 2003 season quite strange, his young team-mate managed to challenge for the title and finished second, while Coulthard himself finished 7th 40 points behind his team-mate.

Quite like his commentray, he seems to be neutral in the incidents, he may talk about Red Bull a bit, but not that much, it isn't as bad as the BBC with Button.

Hang on so what you're telling me is that throughout his entire F1 career DC only beat his team-mate in Quali twice? Liuzzi and Klein? and Klein beat him over the few races the year before anyways?

Contributor
DC catching a golf ball... with a Mercedes SLS.

Contributor
I'll post a video of him on the dance-floor getting out-danced by my mate in Amber Lounge at Monaco later on. I don't have it to hand at the moment.
M

Contributor
Yeah he's nice enough not world championship material as a pundit he talks shit and I think he joined Jaguar after McLaren which became RedBull, who just kept him on as a development driver until Vettel was ready.

Valued Member
He did a good job with Red Bull, he kept that team treading water very nicely until they had a good car.
M

Contributor
AND then he was GONE with a consultants job for being shit.

I wonder what his consultants job entails? I know bigging up RedBull at every possibility whilst on air..

I thought he had his best shot in 2000 when he was in the form of his life after the plane crash....then he had 4 races in a row where the luck conspired against him ...mainly being messed up in the pit stops by Mclaren and losing out and he faded to 3rd in the championship

If only he did not let Hakkinen through twice ...who knows how his career might pan out
M

no but he did make schumacher angry and responded with a perfect riposte " It was paranoia to the extreme. He needs help"

Contributor
A good number 2 driver but he lacked the consistency, killer instinct and ability to be a world champion driver.

Mephistopheles said:
I think he joined Jaguar
Click to expand

Supporter
Coulthard with a rocket start and his first podium for McLaren at the Nurburgring 1996.

Contributor
DC was like so many F1 drivers - we applauded when he got into the sport, knowing that he was capable, then 'got relegated' quite early on to be a number two. Quick enough to fend off the opposition, but not in a position to call the tune.