Contributor
So here we are, it's already the start of the 2014 season! Last year was the inaugural year of the much coveted CTA Race of the Year and it's time to launch this year's competition. Hungary won last year, and the rivalry for this year is fierce after the mayor of Budapest released an image showing his prize: 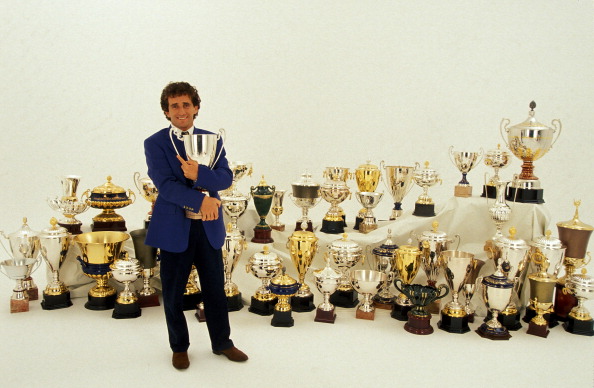 We don't do things in half measures at CTA, one trophy just isn't enough!

With the complete regulations overhaul I think we can look forward to some exciting topsy-turvy races, so perhaps we can see some races convince the hard to please CTA crowd to award an average score of above 8/10 for the first time! At the other end of the spectrum, can anything be worse than last year's Spanish grand prix?! We also don't shy away from controversy here at CTA, as the races will also be battling it out for the infamous prize of most disputed race of the year - the race that we just couldn't agree on and had the widest spread of opinions.

How does it work?

It's simple! After each race an "out of ten" thread with a poll will be made in this forum. It might not be made by me but I will try to remember to post a link to each poll in this thread. Just submit your score out of ten for the race - that's it! Typically I will give you up until the Friday before the following Grand Prix to get your votes in (which normally means about two weeks).

Your score out of ten should be based on your enjoyment of the race. This can be based on whatever criteria you like, it's your opinion. Opinions, of course, can be biased and that's fine! That is what this is all about, getting an idea of people's emotions through the season - at what point in the year we were glued to our TVs and when were we dozing off?

After the votes are in I will tally up the scores and calculate an average, and also a number to represent the spread in opinions (higher number = more controversy!). If necessary I will also calculate some tiebreak scores to separate closely matched races. I'll then post the updated tables of results here.

For the people who want the stats!

If you're not interested in the statistical details of how I'm calculating the average etc. you don't need to read any further! For those that are interested, here are the statistics I'm using (with some slight modifications to last year). I won't explain things in much detail now but feel free to ask questions if you don't understand something. Equally, I'm always open to suggestions for how to improve things.

Race of the year: The median is now the primary score, instead of the mean, as it is less sensitive to a few outlying scores. So the CTA race of the year is now determined with scores in this order:
Score - Median
Tiebreak 1 - Mean
Tiebreak 2 - Mode

What was the race of 2013. Sorry I wasn't paying attention. Probably because I didn't know what I was actually voting for.

I was late joining in... OMG , how deep do I keep digging.

I am actually really interested, but I lost that bit of it last year.

Valued Member
By the picture of the mayor of Budapest/Alain Prost, it was Hamil- Hungary.

sushifiesta said:
Hungary won last year, and the rivalry for this year is fierce after the mayor of Budapest released an image showing his prize
.​
Click to expand

Contributor
Everything you read on the internet is true kids!

Premium Contributor
Of course it is.

Valued Member
And those are just the trophies Ron Dennis didn't keep.

Contributor
Link to the poll for the Australian grand prix: http://cliptheapex.com/threads/out-of-ten-2014-australian-grand-prix.6753

You have until 28th March to vote before I calculate everything.
Last edited: 16 March 2014

Contributor
Here we go then, the results from the first race of the year! Australia comes out as a solid 7: the season holds a lot of promise thanks to the regulations shake up and F1 is finally back, but the race itself wasn't a classic. It also currently holds the title of the least disputed race ever on CTA (at least since the start of me doing this)!

Here are some pretty empty tables to look at:

CTA Race of the Year: 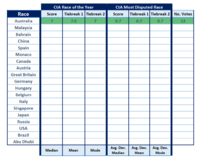 Contributor
Let me guess Australia is winning at the moment...

Contributor
Or is it losing?

Bahrain is next weekend so you only have until next Friday to get your votes in!

Contributor
Malaysia shows that a Hamilton win by itself is not enough to score highly on this forum - it slots in behind Australia with a 6/10. It did create a bit of divide in opinion however, we seem to have two camps developing - one which is perfectly happy with the racing in the new F1 and another that's yet to see a race that's really excited them. Malaysia, therefore, is our current most disputed race leader! 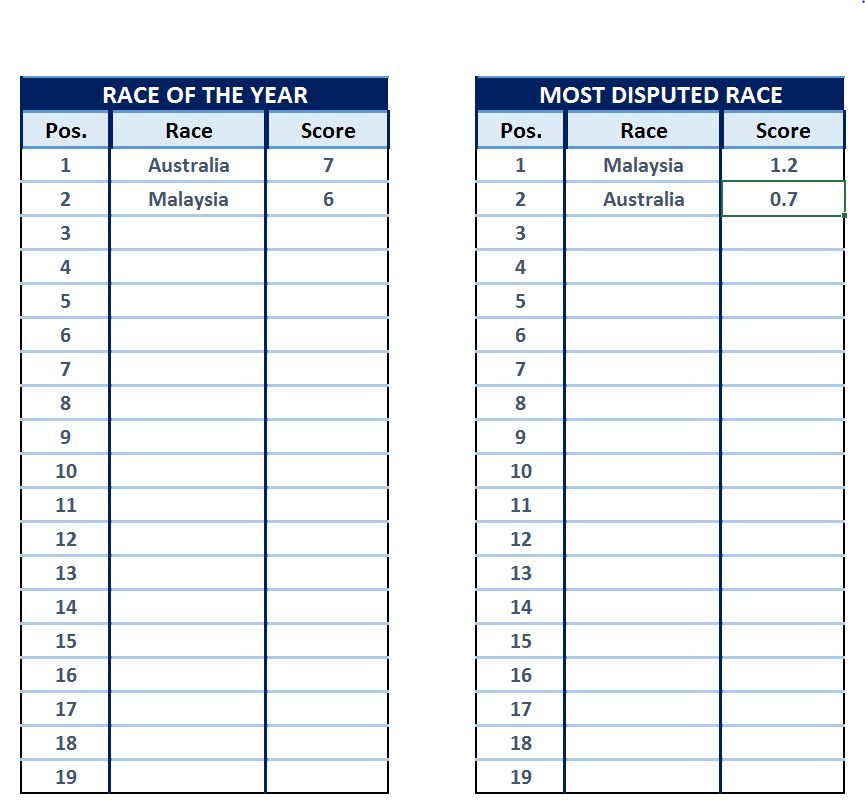 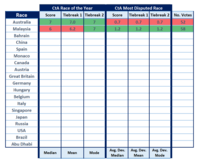 Now on to the controversial and not much loved venue in Bahrain which nevertheless provided one of the best races of last year!

Contributor
Despite all the usual comments about how crap it was going to be before the weekend started, Bahrain yet again provided us with an absolute cracker of a race! I believe it currently takes the crown of the best ever race voted on by CTA so far (since the last few races of 2011), just beating Brazil 2012 on the second tiebreak. Whether it was really better than Brazil 2012 is debatable, but it definitely provided us with so much more than any race in 2013, with the fantastic prolonged battles between Hamilton and Rosberg at the front and everyone else in the top 10 behind them. That, combined with it being the first truly exciting race of the V6 era, justifies its score I think. 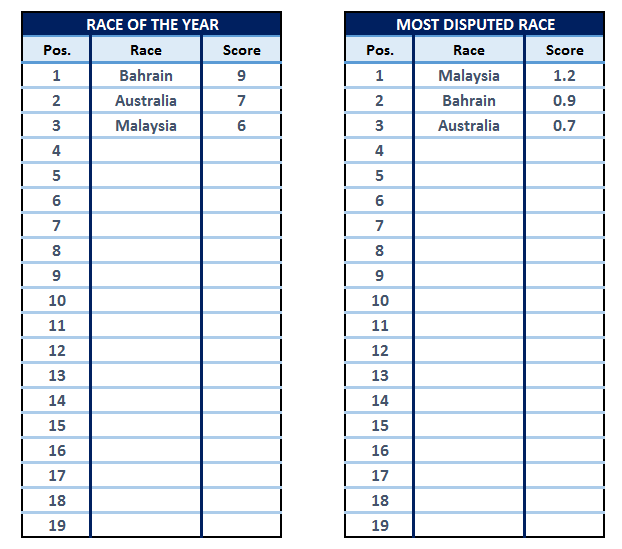 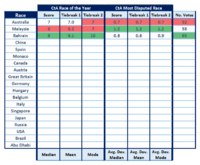 Contributor
So, long time no see but China has quietly been voted the worst race of the year so far over the past few weeks after a very dominant victory from Hamilton. It seems we are much worse at agreeing what score the bad races should have than the good races though, as China takes the top spot in most disputed race with votes for everything from 2/10 to 9/10! 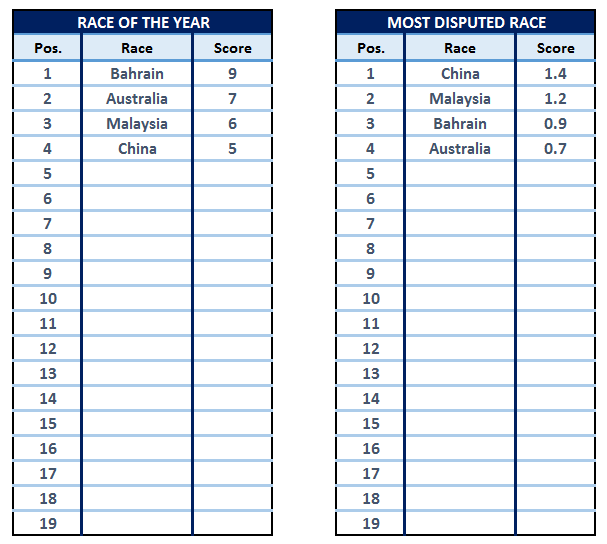 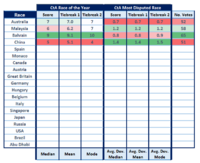