Valued Member
Now we get to the teams who are nearly at the top of the all time lists.

Cooper had started in the World Championship as early as the 1950 Monaco Grand Prix, but their first concerted effort at the Championship was in 1952, with Mike Hawthorn scoring their first podium at Silverstone. However, when F1 returned instead of F2, the Cooper team returned to the shadows.
They were back in full force for 1968, in the hands of privateer Rob Walker. He ran a car to win for Stirling Moss in Buenos Aires and Maurice Trintignant in Monte Carlo. The Cooper company's own Roy Salvadori was runner-up at the Nurburgring ahead of Trintignant in the Walker car, as their best result.
In 1959, their rear-engined revolution was well underway, with Walker far from the only privateer entering a Cooper. Walker's driver Stirling Moss sat on pole for the opening Monaco Grand Prix, but it was Cooper's own Jack Brabham who took the chequered flag. There were two podiums for Brabham before his next win, in Aintree from pole. After retirements in the German forest, Moss took wins in Portugal and Italy. However, Brabham was to take the title after Moss failed to finish the inaugral USGP at Sebring, pushing his car over the line in third. Bruce McLaren was the race winner.
He was to win the first race of 1960 in Buenos Aires too, as Cooper continued at the top. Brabham was to take consecutive victories at Zandvoort, Spa, Reims, Aintree and Porto. Thus the title would again be the Australian's. The new formula for 1961 saw Cooper lagging behind Ferrari, however, and the emergence of BRM and Lotus meant Bruce McLaren's win at Monaco in 1962 would be their only win for the next five years. The customer entries dried up.
Their last two victories would be consecutive. John Surtees won the Mexican Grand Prix in 1966 ahead of the Championship winning cars of Brabham. The next race, the 1967 South African GP, saw few entrants, with Ferrari amongst the withdrawals, and privateer Rhodesian John Love led in his customer Cooper. Sadly, the greatest shock in F1 history did not come to fruition, but Pedro Rodriguez still took Cooper's last win with Love in second place. Brian Redman and Lucien Bianchi's 3rd places in Spain and Monaco in 1968 marked their last podiums. Their last start was with Team Antique Automobiles. Sadly, Cooper had finished.

British Racing Motors had a few entries to their name before the 1958 season, but it was at Zandvoort that year that they scored a double podium from Jean Behra and Harry Schell to come to the attention of the world. Their next podium would be at the same circuit in 1959, as Jo Bonnier won from pole. Stirling Moss also took a podium for them! In 1960, BRM hired their most famous driver, Graham Hill, who took a podium at Zandvoort. They were left behind by Ferrari in 1961, but were right on the pace in 1962.
Hill took the win at the season opener at Zandvoort, which had now seen 5 of BRM's 7 podiums. An engine failure cost Hill the win at Monaco, and he had to wait till the 6th race of the season at the Nurburgring to take his second win. His third followed on Monza's banking immediately, and a final win at the final race in South Africa took both Championships.
For the next three years, Hill won two Grand Prix each, at Monte Carlo and at Watkins Glen each time. BRM's total was supplimented in 1965 by young Scot Jackie Stewart's victory at Monza. It was Stewart who took BRM's Monaco victory in 1966. 9 podiums followed in the next years, but no victory was forthcoming until Pedro Rodriguez' victory at Spa in 1970.
1971 was a surprise return to form for BRM, who finished 2nd behind Tyrell in the Constructors' Championship. It also saw two victories, Jo Siffert's win from pole in Austria, and Peter Gethin's win by a semi-smidgen in Italy. But there were to only be two podiums left for BRM. Their final victory came, fittingly, at Monaco through Jean-Pierre Beltoise in the rain. Two years later, he was on the 2nd step at Kyalami. He scored their last point at Spa that year.
A couple of entries for car #14 in 1975-77 could not disguise the end of BRM, after their great year of 1962, and their status as Monaco legends!

Red Bull (18) at time of publication

Red Bull brought the Jaguar team from Ford at the end of 2004. They finished 7th in the Constructors' Championship in 2005 & 2006, with David Coulthard taking the first podium (with a Superman cape) at Monaco in 2006. There were two more third places at the Nurburgring in 2007 with Mark Webber and at Montreal in 2008 with Coulthard. They'd been beaten to their first win by their 'B' team Toro Rosso, in 2008, and signed their young driver Sebastian Vettel to replace the retiring Coulthard.
The Newey-designed RB5 was their breakthrough, easily the best car with a single-deck diffuser in the 2009 field. However, Melbourne was to end in disappointment as Vettel tangled with the BMW of Robert Kubica to knock both off the podium. However, the German won from pole in the wet at Shanghai two weeks later, with Webber second. Four Jenson Button-dominated races later, another Vettel/Webber one-two was forthcoming at Silverstone, before the roles were reversed at the Nurburgring. Disappointingly, however, the next five races passed without victories as McLaren and Ferrari joined Brawn's opposition, and wins in the last three (for Vettel in Suzuka and Abu Dhabi and Webber in Sao Paulo) were tempered by Button's Interlagos celebrations.
But the RB6 was even better. Two pole positions for Vettel in the first two races ended in engine failure, before the German beat his pole-sitting team-mate off the line in Sepang from the second row to win the race. The rain in China ruined Red Bull's day, but Webber was to hit form, leading every lap of the Spanish and Monaco Grand Prix, and up to lap 40 of the Turkish Grand Prix. There he was hit by Vettel, gifting McLaren a one-two.
Vettel was able to win the European GP later before a miserable summer of mistakes harmed his championship chances. Webber was twice the profiteer, in Silverstone and Budapest. However, after a small mistake in qualifying in Singapore, Vettel finished the season without a blemish, winning in Suzuka, Interlagos and Abu Dhabi to take the title despite an engine failure in Yeongam. He has started 2011 in the same light, with 3 wins from 4 pole positions.

Contributor
I've always had a soft spot for BRM, who employed two of my all time favourite drivers during my formative years as a Formula 1 fan. But I was somewhat surprised that their final win was as late as 1971, even more so that they continued racing until '77.

I still have this iconic picture of Stewart and Hill airborne over a brow at the Nurburgring as my pc desktop background: 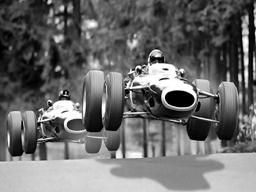 Contributor
The downfall for Cooper was the change to the 3 litre formula in 1966. They were saddled with the weak and unreliable Maserati engine in 1966 and 1967, then switched to the equally pathetic BRM for 1968. Their history might have been very different if they had switched to the Cossie instead of the BRM, as all of the Cooper drivers said it was and excellent chassis, one of the best-handling cars on the circuit.

. Have to wonder if BRM could have won more if not for their persistence in making their own engines (like Ferrari) The H16 is one of the worst engines ever.