Week after the a rather entertaining Spanish GP which took us all by surprise & we go to the jewel in the crown of the F1 calendar & was 1 the most watched race of the year but that has declined in last few years according to reports. Monaco, as im in minority who enjoys the glitz the glamour, the yachts, the harbour of monte carlo circuit. i thought it was up to me to right up the thread. for me its an iconic challenge you ask anyone who doesnt watch F1. Monaco will come quite high in the list of circuits they'd name.

For me i love it, yeah races can processional as its difficult to pass & F1 may have outgrown. only Grand Prix that does not have to adhere to the FIA's mandated 305 km minimum race distance for F1 races. but qualifying on Saturday is still the biggest challenge an F1 driver can ever face. building up the confidence & every driver says their is no feeling like it when you hook up a lap around here. Senna called it an out of body experience. where he was watching himself from above. in 1988 when he did maybe the greatest pole lap in F1 history& to lose monaco would be same as to lose Monza, Silverstone or Spa.

or in recent years
- Hamilton hitting the tabac barrier in 2008, that was inadvertently perfect strategic timing
- The red flag tyre controversy in 2010
Schumacher pole in 2012
- Rosberg controversial pole 2014. that started deterioration/end of friendship
- Mercedes misjudging Hamilton Lead & pitting during late SC threw away a certain win
- Red Bull pit stop disaster, throwing away Riccardio chances of victory who dominated all weekend
- Riccardo getting justice for 2016 in 2018 but having to hold off vettel with ailing engine
- who could forget last year, Leclerc already on pole, flying on his final lap but crashing into barrier at swimming pool. which would result in not being able to start his home race

Monaco is to F1 what the Titanic was to transatlantic crossings. A great idea to begin with, set up with the rich firmly in mind. Designed to show off everything that people would want. Now though it exists only as a tragic wreck. A memory of an era long past and something that will never and should never be built or used again.

Contributor
It’s that time of year again when Charles Leclerc ends up in the tyre barrier. 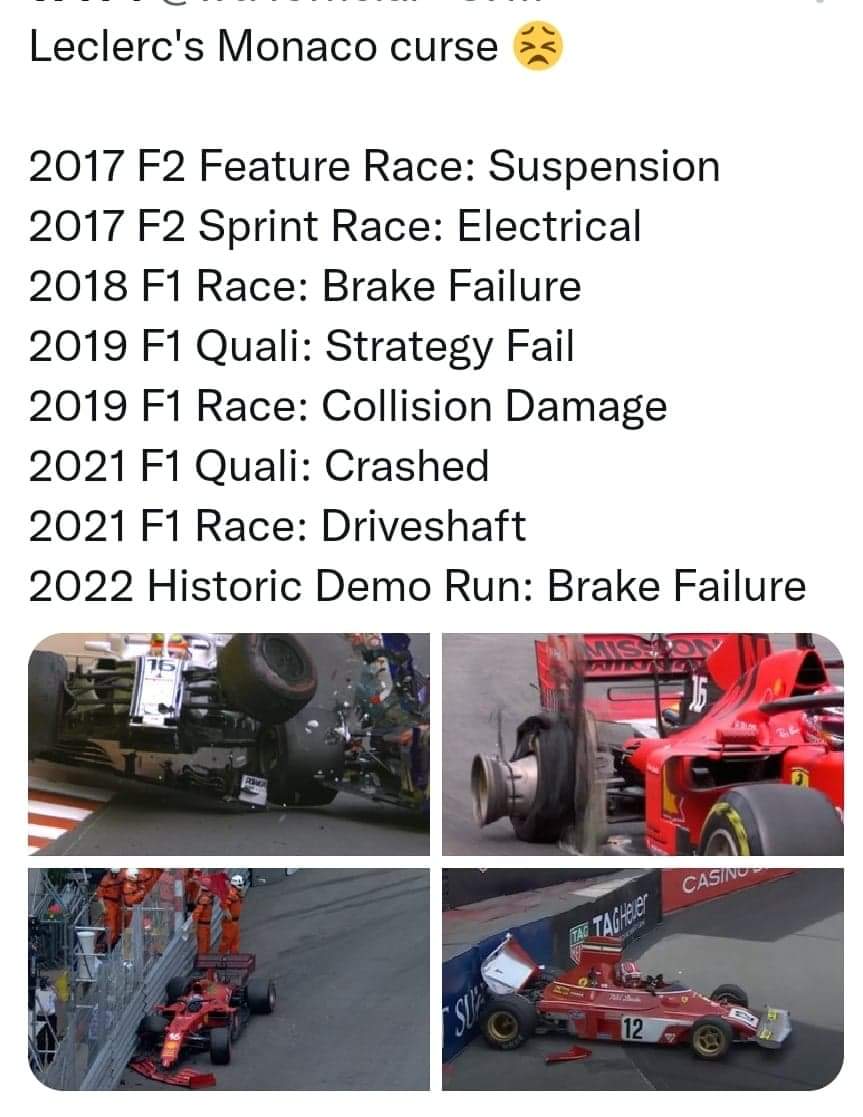 best qualifying of the year today

Johnny Carwash said:
It’s that time of year again when Charles Leclerc ends up in the tyre barrier.
Click to expand

I hope not I hope Verstappen ends up in the barriers like he did back in 2018 at the end of 3rd practice because his stupid ego allowed to get the better of him . It meant the team had no chance to repair the car for qualifying

Who do you think will park their car ?

thats a huge gap Le Clerc is ahead

Il_leone said:
Who do you think will park their car ?

surely nobody would be that stupid, schumacher proved that in 2006

Verstappen 3 tenths down on Perez that will pi$$ him off

Staff Member
Premium Contributor
Alex Albon has been around 1.5 seconds faster than Latifi in all three sessions. This surely shows that, while the Williams is clearly running near the back of the field, its nowhere near as shit as Latifi is making it look.

Agreed & thats were the rumours are coming from, i heard through ted race notebook, the new owners dont think that they need Latifi money anymore & would rather take the performance. it would have to be from Belgium onwards as the Formula E season finishes 14th august.

but i hope for Riccardo sake, he was being careful after what happened yesterday because he was as far Norris as Latifi was off Albon

cider_and_toast said:
Alex Albon has been around 1.5 seconds faster than Latifi in all three sessions. This surely shows that, while the Williams is clearly running near the back of the field, its nowhere near as shit as Latifi is making it look.
Click to expand

F1Brits_90 said:
surely nobody would be that stupid, schumacher proved that in 2006
Click to expand

Stupid or Arrogant to do it

That was an outrageous red flag... So many teams lost brand new tyres because of that - Norris had just been gearing up for a fast lap when the red flag (for nothing) was put out...

If it is true that this was a rogue marshall, then I think that this should signal the end of Monaco as an F1 destination...

Ricciardo's time is not genuine right - 1.5 seconds slower than Norris?