On the surface a triangle is a simple 3-sided shape. At some point in our education we learn that all of a triangles interior angles add up to 180’. Then the mathematics gets a little more complicated as various theories and concepts are added in to the mix. Most of us give up at that point as the reason or purpose for all this understanding is lost on us.

Some of us carry on in education and take up careers in engineering where, among many of its individual disciplines, the triangle takes on a new importance. From mechanical to structural and even electronic engineering, the maths and science surrounding this simple three shaped side, is used to develop everything from buildings to cars and complex electronic circuits.

In vehicle engineering the triangle plays an important role in the early formula one cars as the prime shape of its space frame. The frame is made up of sections of tubular structures formed from triangles. These tetrahedral truss’s form some of the strongest man-made structures since the shape is rigid and light weight relative to the materials used in its construction.

The first true space frame chassis appeared in the 1930’s and, like many other aspects of vehicle design, mirrored ongoing work in the aerospace industry. After the second world war, sports car makers such as Maserati, Porsche and Jaguar launched vehicles with space frame technology. Small British sports outfits such as TVR and Lotus followed the trend and soon, space frame technology found its way into motor racing.

While the monocoque replaced the space frame by the end of the 60’s, triangle shapes still play a key role in F1 cars, with body panels and suspension components still carrying this distinctive shape right up to the present day.

That triangular journey to the present day, didn’t start in the 1930’s. The history of the triangle dates back thousands of years. Its history spans cultures, people and the globe on a journey of scientific development the is far greater than its humble shape would have you believe. We tend not to dwell too much on the origins of things that we see every day. You don’t imagine that triangles and the science around them would have a beginning.

The most basic principles of a triangle are wrapped up in Pythagorean Theorem. Named in honour of the great Greek mathematician Pythagoras. In simple terms it’s written as a2+b2=c2 or, the square of the hypotenuse is equal to the sum of the squares of the other two sides.

Of course, triangular structures long predate Pythagoras. As an example what is the primary shape of the Pyramids of Giza? There is a great deal of evidence that the understanding of Pythagorean theory existed long before the man himself, even if it wasn't as well recorded.

This is where the culture of maths enters the story. The principle use of maths in the earliest periods of its development was for the study of astronomy. One of the cultures at the forefront of this research was the Islamic faith. Far from being the stereotypical people that we read about today in various right-wing papers and see misrepresented on our TV screens in one way or another, while many people in Britain were daubing their faces with plant dyes and charging at other people with pointy sticks, Islamic scholars had created the foundations for the scientific principles that frustrate and confuse school children across the globe today.

The word Trigonometry derives from the Greek words Triangle and Measure. Without the mathematical functions that this science gives us engineers in the pitlane would not be able to calculate huge amounts of data related to the speed and performance of a range of systems on their cars.

Sumerian astronomers studied the ratios between angles and circles and later, Babylonians discovered links between these ratios and types of triangle. The Greco Egyptian astronomer Ptolemy created the first trigonometric tables known as a table of chords. These tables were used across the growing world for the next 1200 years until more accurate tables could be produced. By the 10th century Islamic scientists were using all 6 trigonometric functions and were applying them to all sorts of geometric problems. The Persian mathematician Nasir al-Din al-Tusi has been described as the creator of Trigonometry as its own mathematical discipline and the first person to move trig fully away from astronomy and to create the mathematical uses that we still apply to problems in the present day.

So, when you watch the Bahrain GP, keep in mind that our scientific understanding of the world and the science that we see applied in almost every aspect of the GP we are watching, from the cars to the construction methods used in the steel stands that the race goers are sat on, owe a huge debt to the work of Islamic scholars who applied themselves to the puzzles of the world, thousands of years before.

Valued Member
What a great picture. 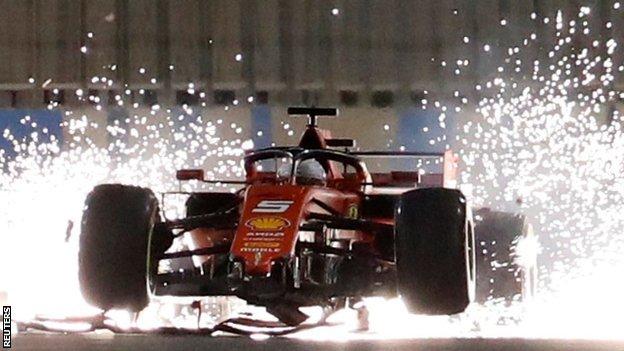 Contributor
That almost got me going.

FB said:
What a great picture.

Not if you're a Vettel fan, but yeah, I know what you mean.

Contributor
FB night nick that for a profile pic.

what a fantastic race with mothers day events didnt get to it til late last night, easily best race since American GP. i told you these rules would be better once we got to Bahrain. of course glad lewis/brit won but Toto Wolff reaction told you he knew he wasnt delighted as he knew that they were well & truly beaten this week. absolutely gutted for Leclerc but we seen it so many times down the years thinking mika monza 99, spain 2000, lewis brazil 07, massa brazil 08, Le mans 2016? this sport can be so cruel. leclerc can be proud. easily driver of the day & he proven that hes more than a force in F1 this season. as the title odds have proven 12/1 pre race 11/4 post race

Vettel took advantage of the poor start, took the lead but im trying to remember the last time & his teammate overtook him for lead, as cant remember Kimi or Riccardio doing it & i have to think back to the webber days in 4 straight title years. then again a silly mistake he always capable of one. pressure is on him now because when teammate challenges him he often dips

few final bits Gasly another poor race he shouldnt be battling with the toro rossos & still couldn't finish the top 6, but its fine because as we all know helmut marko & Red bull are very well known for their patience. in letting their drivers settle in . Haas pace was a strange one where did there pace go from qualifying. Renaults strange double DNF, something electrical appartantly. Norris was fantastic, exceeding my expectations of the car & driver. 6th place what a drive

Contributor
Just something to note - for the first time in nearly 2 years Kimi gains positions on lap one of the Grand Prix!

Angel said:
Oh dear Radical F1 I hope you recover soon. I recorded the race and watched it back this morning, I wished I hadn't now

Poor Leclerc and what was going on with Vettel AGAIN?

It wasn't just the two Renault drivers that broke down, Sainz went out in he Renault powered McLaren on the same lap.
It was like the engines had a suicide pact or something. As I said in the other thread, Norris was lucky to finish given that. He drove well again. Oh and Kimi in the Alfa looked pretty racey for a while there too.
Click to expand

YepI was a zombie at the office today and was feeling really terrible for those who has engine troubles particularly Leclerc. It was too early in the season to be having troubles like that. But like he said in his interview, that's racing !

Publius Cornelius Scipio said:
It hasn't started yet, no one seems to be asking for Vettel's sacking. I don't think that Schumacher Jnr will be in a position to move into Ferrari anywhere soon, the pressure would be too much for him, if he does well (and Giovinazzi keeps on underperforming) he might have a chance at Sauber, even if I would assume that wehrlein is the first in the queu for that Sauber's seat
Click to expand

Have to say I was very underwhelmed by Mick Schumacher in his F2 debut weekend. The F2 field is not as strong as it was either so was expecting him to be more prominent. I think F1 really wants to write the heartwarming story of the son of Schumie rising to the top of the sport but I'm yet to be convinced of his talent.

Having said that Ferrari's other academy drivers Illot and Alesi don't look any better so if they are looking at ditching Giovanazzi - and want to go through their own pool rather than a Merc cast off - then he is probably the choice next year.
Last edited: 1 April 2019

Staff Member
Premium Contributor
My heart is still a little bit warm from the Schumie brothers. I think Jnr can wait a little bit longer.

Contributor
Ralf is suddenly around doing interviews again I notice.

Contributor
I fully expect Mick to be nearly as good as him.

Publius Cornelius Scipio RasputinLives We suddenly have great PR about Ferrari rather than the stone cold silence of last year
Did not Ferrari learn from Toyota " They signed Schumacher but the wrong one!"

Illott did mention he raced against Albon, Norris and Russell in junior category so his progress into F1 has slowed compared to the others

Contributor
I'm afraid Illot didn't get anywhere near the top 10 in F2 this weekend Il_leone and was out classed in GP3 last year in the end. He has a long way to go to be anywhere near an F1 drive.

Valued Member
Anyone noticed how much better F1 is with a batch of new, young drivers making an effort?