Staff Member
Premium Contributor
Ok, so my retirement was short lived. Given how popular the GP quiz thread remains it's time for me to stop sulking and get back in the game.

Hopefully, there will be something for everyone: Enjoy:

1) What was significant about the entries of German drivers Theo Fitzau, Ernst Klodwig and Rudolf Krause that made them the only three?


They were the only 3 drivers to represent East Germany in the World Championship
2) Which major F1 figure and team co-owner made his debut Formula 2 race at Hockenheim at the event that saw the tragic death of Jim Clark?


Max Mosley
3) Which German family of racers has given the sport 3 drivers?


the Winkelhock's. Brothers Manfred and Joachim and Manfred's son Markus (who famously led his only F1 race).
4) Name the Prost driver taking the scenic route and the year? (Half a point for each) 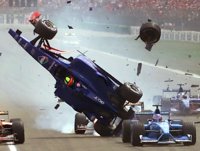 That there is Luciano Burti and the year was 2001
5) Which legendary driver spent one season at Mercedes and won one Championship GP for them at the 1955 British Grand Prix?


Stirling Moss
6) Before Lewis Hamilton winning in 2008 who was the last British driver to win the German GP?


Eddie Irvine in 1999. (Schumacher stand in Mika Salo gifted Irvine the win to keep up Ferrari's drivers title chances)
7) Fill in the missing Germans from the result of the 2011 German Grand Prix: (Half a point for each)


Adrian Sutil for Force India and Timo Glock for Virgin
8) The last time there were two German registered Formula 1 constructors racing in F1 at the same time was during the 1989 season. For half a point each, name either constructor.


They were Rial and Zackspeed
9) For the first time this season since the 2012 Brazilian Grand Prix, a German Car or driver didn't set pole, fastest lap or win the race. At which race this season did that happen?


It was Monaco where Danny Ric claimed pole, Max set the fastest lap, Danny won the race and Red Bull were the winning constructors. If you include a German Engine you have to go all the way back to Alonso's grand chelem for Ferrari at the 2010 Singapore GP.
10) At which Grand Prix did Germany's other engine maker (BMW) take their first win in 1982 and their (to date) final win in 2008?

Premium Contributor
I enjoyed it.

Contributor
I got the last two right.

Premium Contributor
Don’t be sorry cider_and_toast , it’s not your fault that I’m as thick as two short planks.

Valued Member
Quiz questions are only easy if you know the answer.

Contributor
In that case, 3 of them were easy.

Valued Member
The joy of 6

Contributor
That had me scratching my head, so much so that I failed to score a single point.

and a half for me.