After trips to 4 continents & a sub continent Oceania, Middle East, Asia, Europe, North America in opening 8 races. whether its 4 in Europe & 1 in Asia or 3 in Europe & 2 in Asia depends where you classify Baku. We are home, & doesn't it feel nice, although everyone at the 11 teams will be delighted for the week off after the very draining im assuming 1st ever triple header & not only are we home but so are Formula 1 as everyone knows the 1st ever Formula 1 race took place in 1950 at this very circuit.

Definitely taking inspiration from cider_and_toast because i wouldnt dream of blatantly nicking ideas.

thought I might give a bit of history lesson as well. Silverstone does have 1 of the best circuits in the world but its layout was only stumbled upon by accident. because RAF Silverstone was opened in 1943 but in a classic world war 2 triangle layout which brought the perimiter roads. Also the 1st ever motorsport event to be held at the Silverstone airfield as it was then was a extremely low key event in 1947. & was organized by a guy called Maurice Geoghegan. he lived in nearby Silverstone village and was aware that the airfield was deserted had been for a while (of course world war had ended 2 years prior) so he & 11 other of his friends got to together & raced over the 2mile circuit, although his race was ended prematurely when a few sheep had wandered onto the airfield & Maurice hit 1 of the sheep, which killed the sheep & wrote the car off. in 1948 The Royal Automobile Club took a lease on the airfield, to set out a more formal racing circuit. they hired An ex-farmer,giving him just 2 months to turn the site from a wartime airfield & farm into a race track for the inaugural RAC International Grand Prix On the 2nd October 1948 an estimated 100,000 people flocked to see Luigi Villoresi beat a field of 22 in his Maserati. the 1st 2 races were organized & held on the World War 2 runways, with long straights separated by tight hairpin corners, the track only defined by Hay bales & ropes that also protected crops in the middle of the circuit. Then the royal automobile club decided to move racing to the perimeter track for 1950 & 1951 F1 races. 1950 1 of most known winners of an F1 grand prix. which even though it was widely known as the British GP Officially it was the 1950 Grand Prix d’Europe & it was significant occasion for another reason as King George VI & Queen Elizabeth (queen mum) were in attendance, which is still the only time a reigning monarch has attended a British motor race, then in 1951 BRDC took the lease from RAC who didnt want it & rest they say is history

The drivers are going to get a shock with this heatwave, because like Belgium all the drivers turn up here most years expecting cold & wet weather. but we have been experiencing temperatures in the high 20's for a few weeks & with the forecast it looks like it going to continue all next week as well. but im probally biased but this is 1 of highlights of the season up with Belgium & Monza. because such a great atmosphere with stands are packed from FP1 & full of fans with great British humour down the years. always some of the best celebrations because when Brit wins at Silverstone its on a par with a Ferrari win at Monza. But unfortunately this is the 50th & potentially penultimate British GP. very nearly the final in its traditional place in July, because Sean Bratches has all ready confirmed that it was the 1st choice for hosting the 1000th grand prix in April 2019. but then someone told him about Easter 2000 & he was put off for some reason haha but as i said this the penultimate British GP because of the Mexican standoff between Bernie's contract, Silverstone's owners & Liberty Media. after BRDC confirmed the rumours & triggered the break clause in their contract on day of the 2017 grand prix all because of unsustainable 5% fee escalator built into the deal by Bernie, after the Donington park fiasco. which means that what was a estimated cost of £12m - 2010, became £17m - 2017 17.9m - 2018 19m - 2019 ,& by 2026 if clause hadn't been invoked would've been in excess of 27m

thought i would give some historic Silverstone facts. that you may or may not know & I couldn't shoe horn in 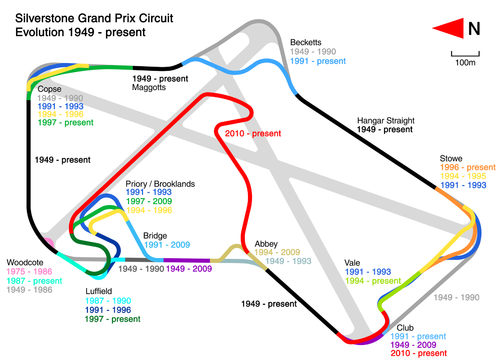 Contributor
Not only will the weather be hot just for once there could be a race nearly halfway through the calendar where the leading proponents are divided by a single second. It's almost enough to make you want to go there.

Contributor
Flat and windy whatever the weather.

Valued Member
Nice write-up. The mutton GP and a mad priest - it's always had a bit of a village fete vibe.

Well red bull won at the red bull ring. Will the silver arrows win at silverstone

Actually they probably will if they sort out the reliability issues they had in Austria. It's more worrying for them that both cars retired with different issues than it would have been if they'd both had the same one I'd say.

and then a Ferrari one two at Monza! It's fixed I tell you

Question (looking at that great map):

1. Should they reshape Becketts back to its original form?
2. Is there any other parts of the track that they should change?

Contributor
Yes they should move it to Donington so I can go on the bus.
Last edited: 2 July 2018

RasputinLives said:
and then a Ferrari one two at Monza! It's fixed I tell you

Honda are going to win at Suzuka. Ok now i mayve push it a bit too far

Ruslan not sure about changes but maggots & beckkets are 2 of greatestcorners in f1. We cant miss them
Last edited: 2 July 2018

Contributor
An amazing Gasly victory? Would certainly make the headlines.

Valued Member
The original circuit was perfect for pre-downforce slipstreaming battles - great footage of Stewart, Hill and Rindt going at it among others. But a modern car needs a slow corner and a heavy braking zone to make overtaking a possibility, alas. They had the opportunity to add this with the 2010 changes but, in my view, messed it up. Maybe go straight on at Brooklands and have a tight right-handed hairpin through the old pit entrance onto the old pit straight at Woodcote - cutting out Luffield?

I think Becketts is the only change that has improved it, actually - again because of downforce - and the onboard footage through there is always superb.

Or just do as RasputinLives says. More interesting circuit all round (in addition to the public transport advantages).

great track, pity they made so many changes, not always for the better. I'm not particularly keen on the changes that they made from Abbey to Woodcote, and I also believe that Copse was a great corner and they turned it into a bit of a damp squid (they did the same to other great corners around the world, Lesmo 1 and Lesmo 2 at Monza for example)

Valued Member
I'm going to admit something here which those who have put up with me ranting about what an awful circuit Silverstone is might surprise you. Watching any racing car going through Maggots and Becketts is an absolute treat. The speed the serious cars change direction through these corners is breathtaking. Rest of the circuit is shit mind you

I believe Pirelli will be bringing their Mercedes spec tyres to "The Stone" so expect nothing more than a Merc pole and lights to flag victory. Are C4 covering this race live? I might take a break from Crofty's full on Lewis Fan Boy commentary as he turns it up to 11 at the British GP and I often have the apperance of vomit in my mouth.

Contributor
So, we are going to see DRS used around a turn for the first time, this will be interesting. Go Lewis!

Staff Member
Valued Member
It highlights a point made by RasputinLives in the Austria thread about designing cars for tracks or tracks for cars.

Just look at the changes to the main corners on the circuit. I bet they mirror the major chassis / engine reg changes starting with Dear Old Bernie's drive to improve the show.

Yes they are. I like DC but Ben Edwards gets a little over excited sometimes and he often makes silly mistakes too. My daughter laughs when I sit there correcting him, but I just can't help myself!

Its a rant and off topic (ish) but...
All anyone wants is close racing at high speed.
It's not the tracks it's the cars.
The beauty of F1 is the tracks and weather conditions are all different but they race on them irrespectively.
But they can't race because they can't get close enough to race,.

And I don't like Silverstone.
Gimme Brands or Donington any day...

The last GP I saw live at Silverstone still had catch fencing on Copse...
That stopped them running wide