As a less than convincing set of test sessions drew to a close in sunny snowy rainy sunny Spain, most of the motoring press had Mercedes out in front as the team to beat again this season.The packing cases, cars, freight, PR Stands and all the other guff that makes up the travelling kit of a modern F1 team will by now be well on its way to Australia and in a few short weeks we will find out if the motoring press are correct.

One man who won't be taking his place in the stands at Albert Park this year will be Ron Walker, the former Mayor of Melbourne and the Chairman of Grand Prix Australia who was the key figure in establishing the Albert Park and Melbourne as the countries addition to the GP Calender. Ron passed away on the 30 Jan this year.

Attendance figures at Albert Park have been on the decline since reaching a peak in 2012. The race day attendance last year dipped below 100'000 for the first time in the tracks history. Does this reflect a growing global apathy with F1 or the lack of Australian interest on the grid since Mark Webber retired?

Four drivers will be taking to the grid in Australia for the first time. Two debutants and two who joined mid way through the season last year. Leclerc joins as reigning FIA Formula 2 champion and the 2016 F3 champion but will find himself saddled with possibley the worst car on the grid. Hartley did little to impress in last years Toro Rosso and will be looking to make a stronger impression this season alongside his team mate Pierre Gasly. Gasly, the 2016 GP2 champion settled quickly in to life at Toro Rosso last season and with the works backing of Honda, both drivers will be seeking to maximise their potential. Sergey Sirotkin won the race off to join Williams, replacing the finally departing Massa. A shame for many who wanted to see Kubica take the seat at Grove, Sirotkin will need to do well to shake off the feeling that he's just another rent a drive. His previous single seat results show that on his day he can perform with the best of the younger drivers and the first thing he'll need to do is show a clean pair of heels to Lance Stroll. I remain convinced that despite the money on offer from both drivers backing, Kubica is just one or two driver error DNF's away from stepping up to the race seat while one of the two are 'rested'.

I'm not going to waste finger strokes speculating about the performance of the teams on the grid because I think we all know who are going to be the key players in this area and see little to convince me that anything will change too much from last year but we live in hope.
Click to expand

Contributor
I have to say I'm far more interested to see who will be at the back of the grid than at the front! I Don't think Sauber are as bad as they've been and Torro Rosso looked pretty sharp in testing. My money would have been on Haas but they suddenly put some quick times in. Williams and Force India certainly have to be looking over their shoulder.

Valued Member
My excitement is limited based on whether Gary Anderson is proven to be wrong. I cannot recall being more ambivalent to an upcoming f1 season!

Contributor
I'm loosing interest as well. There was simply too many boring races last year.

Contributor
There's trepidation all round isn't there? Will Mercedes run away with it again? Will there be limited overtaking and hardly any wheel to wheel action? Will Liberty Media mess it trying to make the boring bits more 'interesting'? I hope there's action and interest at the front of the pack as well as the mid-field, as you say cider_and_toast we live in hope.

Contributor
My hope levels are pretty low it has to be said. I’m fairly sure that Liberty media can turn the track experience round, for those who can get to the races, simply by making the experience more than just the race. I have no idea what they can do about the on screen experience though. That really has to depend on the competition and excitement on track.

Yeah im intetsted at back of the grid more than the front. Sauber will make a jump just how big with current engines & leclerc who in F2 was 1 of best lower formula Drivers ive seen in same bracket as Hamilton Hulkenburg & Vandoorne. race weekend towards the end of season i was running out of superlatives for that good & 'should' take ferrari 2019 seat. As i said in the season preview watching & reading about testing. I keep noticing worrying news that williams could be on or near the back row. Because a few journalists have said the handling looks dreadful on track, 1 said it handled like a dog. But the biggest interest is haas because is their pace real or pre season hype. I find it hard to believe they can go from 9th to 4th quickest in 1 off season

Yeah a dominant 1 horse race with Lewis in sunset would be a disaster for F1. If ever we needed a classic season its this year. Like full season of Hamilton & Vettel hopefully Verstappen, Riccardio & Alonso involved going head to head on & off the track 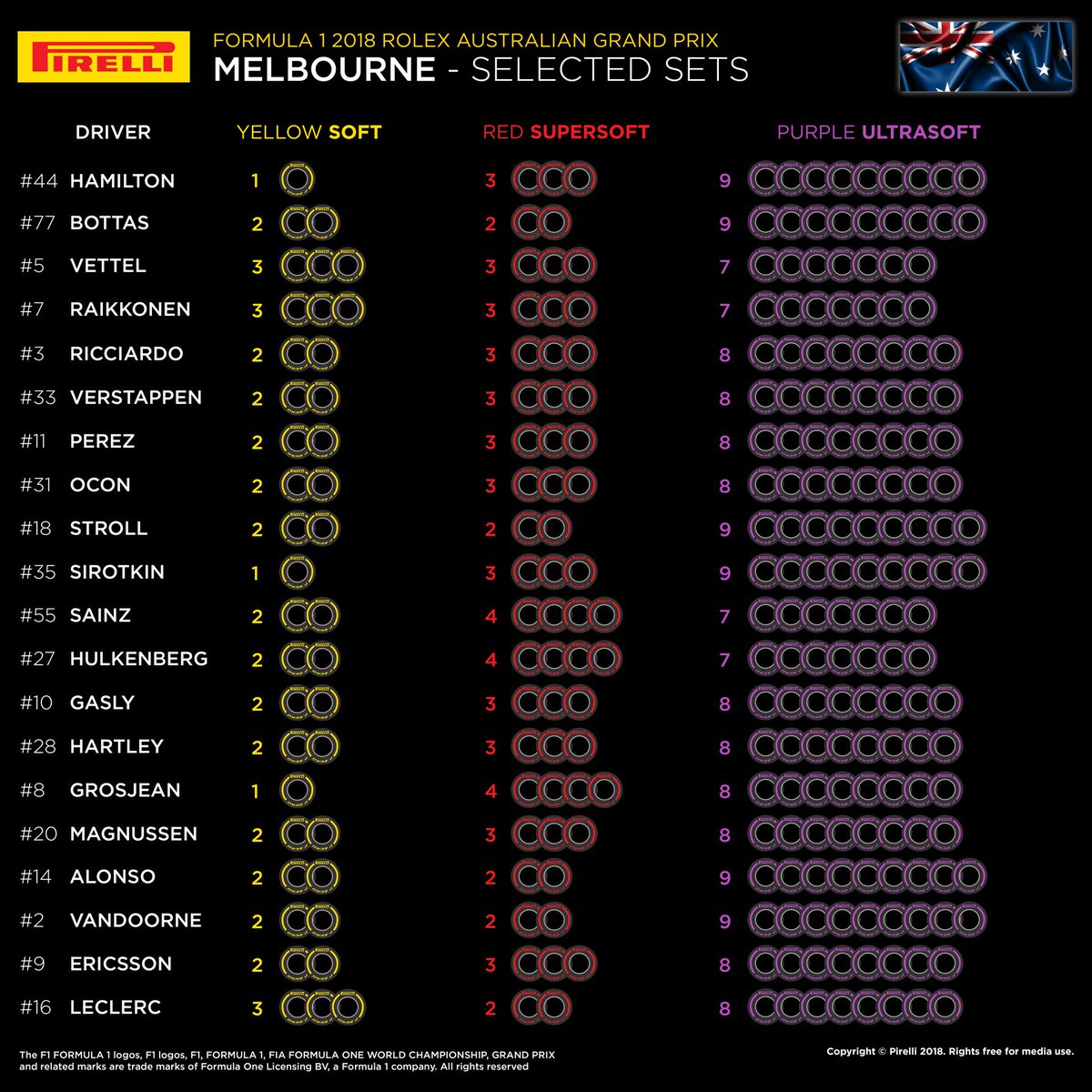 I see Sirotkin is the only other driver who has made exactly the same tyre choice as Hamilton. Is this a portent of things to come? Are we about to see the successor to Hamilton emerge this season .

Contributor
I doubt it. Sponsors are so reluctant to use unproven drivers as the face/name on their products it means the established drivers pretty much get a monopoly on the top drives for an extended period of time. Webber, Massa, Button, Alonso - they've all had careers extended by the pure fact they've been successful in the past rather than current results. I'm sure Hamilton could probably drive until the age of 50 if he wanted too.

Alonso doesn't fit the list. He mainly hasn't had success because McLaren in recent seasons have failed to provide both of their drivers with a competitive car and during his stint at Ferrari he battered Massa 99% of the time.

Contributor
Alonso hasn't actually achieved anything in F1 since 2007. His god like status is build on media hype and PR telling us how good he is. Flavio special.

RasputinLives said:
Alonso hasn't actually achieved anything in F1 since 2007. His god like status is build on media hype and PR telling us how good he is. Flavio special.
Click to expand

We cant forget 2012. How he came so close to winning a 3rd world title, in absoulte dog of a car. Is nothing short of a miracle. Because that car wasnt even on the same planet as vettels red bull

Contributor
Wasn't that the season littered with errors by Vettel?

Maybe its was nearly 6 yrs ago so dont have great knowledge of it. But looking at the stats vettel still had 5 wins & 14 top 5's. Looks like vettel had not so much errors, more bad luck engine flailing in valencia or wrong place wrong time but not huge amount more than alonso. Or like 2016 with rosberg v Hamilton

RasputinLives said:
Wasn't that the season littered with errors by Vettel?
Click to expand

The Red Bull wasn’t very reliable.
The Ferrari was no match for the Red Bull on race pace though and Alonso managed to stay in the Championship battle through consistency throughout the whole season.

Alonso made a mistake by causing chaos at McLaren and subsequently leaving the team but his driving was impeccable up to 2016.

He has no god like status here and no one has presented him in that way, I think we are very aware of his portrayal in the media. Yet to say he’s a achieved nothing since 2007 is a far stretch as championships and race wins were often beyond the realms of possibility for him since 2007.
In direct comparison to his teammates, he’s shown how good he is. He crushed Massa, Räikkönen and Button.
This season Vandoorne will presumably be the thoughest challenger he has had to face in the past decade and it’ll be interesting to see how he copes with the situation.
Last edited: 14 March 2018

Contributor
The problem with Alonso is that team mate comparisons are pointless. It is clear from his history that he insist on number 1 status and that if he does not get it causes trouble within the team. In 2004 he ousted Trulli. In 2005 and 2006 he turned the radio blue everytime Fisichella was in front of him. In 2007 he didn't get number 1 status and we all know what happened there. In 2008 his team mate was deemed so insignificant to him that he was asked to crash on purpose so Alonso could get a better result. The list goes on. It's true that the likelihood is that Fernando would have beat these team mates anyway but looking at the times and stats of beating them is pointless and shows nothing as it wasn't done on a level field.

Contributor
Alonso was awesome at Melbourne last year though.

RasputinLives said:
Maybe 'not achieving anything since 2007' is an over statement but I tired of him. I'm tired of reading how good he is, I'm tired of hearing him say how good is, I'm tired of everyone acting like its some sort of Greek tragedy that he is not up the front taking race wins. I'm tired of him. He has overstayed his welcome propped up by sponsors and frankly he should clear off and let younger talent have a shot before it goes elsewhere.
Click to expand

CTA post of the year and it's only March.

Contributor
Maybe it should have gone in the ranty thread.