As F1 moves into the summer break, Ferrari are firmly in the lead, and Mercedes must be feeling just a little worried.Their supremacy is definitely being threatened, and so the Belgian Grand Prix (Spa-Francorchamps) will be crucial for them if they are to win this years Constructors and drivers championships. Crucial for Ferrari as well.

If Spa is famous for anything it's the unpredictable nature of the race, courtesy of the weather. Frequently one part of the track can be sunny and dry, whilst just round the corner it's raining, quite a challenge for drivers. But despite the difficulties, or maybe because of them, Spa is popular with drivers and fans alike.
Spa started life running on public narrow roads, between three different villages, but by 1983 it had become, more or less, the track we know now. A mix of long straights and fast corners and the longest F1 circuit on the F1 calendar.
Kimi Raikkonen has had four wins at Spa, and certainly has the car to do so again, but I can't really see that happening. His team mate however, with two wins at Spa, and who is hungry for the WDC, will present a very strong challenge.
McLaren have had a lot of past success at Spa. So Alonso for the win. Well no. Whilst I think we are all glad to see some small improvement in Team McLaren, it has a long, long way to go before it wins races, going flat out through the Eau Rouge - Radillon sequence and still being in the race will be an achievement, although in fairness Alonso did finish in 6th positioning Hungary.
This is a circuit where you don't have to qualify on pole to win the race, so we should see some overtaking. Hamilton take note, a poor qualifying will mean some real racing, which to be fair he seems to enjoy.
Obviously the top three teams, Ferrari Mercedes and Red Bull should do well. This is almost Max Verstappens home race, so we should see a very orange crowd of fans, lets hope in his enthusiasm to impress he doesn't take out all three top teams.Danni Ricciardo is only 1 point ahead of Kimi Raikkonen as of now, and that could be a fight worth watching, if Kimi can be bothered.
Force India, pretty in pink, are doing a steady job as the lead team of the mid-field, it would be good to see a more exciting driver in one of their seats IMO. After that it's a steep curve down to Williams and the Torro Rosso. Renault, Haas, McLaren and Sauber are all struggling for points. Sauber have only 5.
But the fickle nature of the circuits weather may have the final say, just take a look at the first lap shunt in 1998, thirteen cars were involved in that, it was total chaos.
Click to expand

Valued Member
Very tight for 5th at this stage:

Plenty of scope for Renault and McLaren to move up, you'd think, if they can maintain an upward curve. Two decent drivers wouldn't hurt, either.

Valued Member
Well, should be a Mercedes win all day long, even if conditions are wet. Vettel's chances in the title race absolutely depend now on how many points he can salvage from these two races. He's fourteen ahead in the title race, if he's level at Singapore then he's done very, very well.

Contributor
I would have expected Williams to be closer to Force India and contesting 4th not 5th Galahad. It's disappointing.

Mercedes should win teabagyokel , but they seem to have lost something, or maybe Vettel has found an extra 10% from inside his head. Hamilton needs to get into the same frame of mind. Bottas however, is a very dark horse.

It will be interesting to see if Red Bull have improved even further aerodynamically to be challenging the front two. I am expecting Mclaren now to start battling Renault who have the 4th fastest car , Williams and Force India

Titch said:
Mercedes should win teabagyokel , but they seem to have lost something
Click to expand

They qualified half a second clear of the field at Silverstone. They'll be alright at Spa.

Contributor
If it's wet on the grid with 5 mins to go Bernd Maylander will be first to the end of Kemmel. 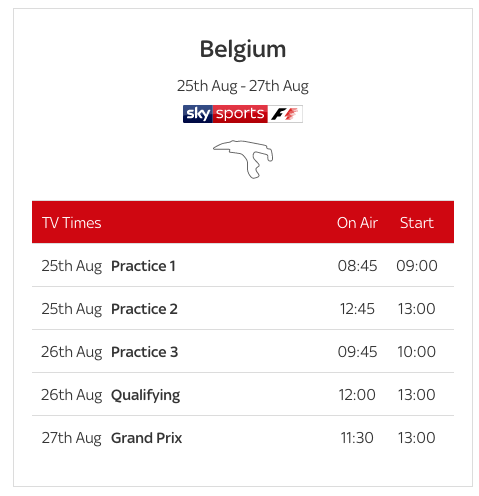 Contributor
I can't wait!
Hang on, yes I can.....F1 is no longer my priority sport.

gethinceri said:
I can't wait!
Hang on, yes I can.....F1 is no longer my priority sport.
Click to expand

Same here. The wife even noticed it earlier in the season. I never thought I'd lose my F1 mojo but sadly its long gone.

cider_and_toast said:
Same here. The wife even noticed it earlier in the season. I never thought I'd lose my F1 mojo but sadly its long gone.
Click to expand

Why, what has happened? It's quite a bit more exciting than last season, is it not?

Contributor
Is the F1 back this weekend? Blimey. Feels like a long time since Hungary. I do hope Lewis Hamilton has been able to get enough holiday in.

Anyone got any accurate weather prediction apps? I think we could do with a downpour about ten laps from the end to spice the race up.

My money is on Max this weekend by the way.

Contributor
My WeatherPro app says Sunday will be damp most of Sunday, but ten laps from the end there will be a slight increase in precipitation around the Bus Stop / La Source area of the circuit

Contributor
That's a very precise weather app vintly. Is it actually any good?

Contributor
Well Titch I jest about of course about the 'ten laps from the end' part of the prediction, but the WeatherPro app is generally very accurate. At the risk of sounding exceedingly dull, I can tell you that it has a live satellite feed updated every 15 minutes, so you can see a loop of the last few hours, which gives a good indication of what's to happen next. Recommended.

Contributor
Can't be as accurate weather predictor as Jos the Boss

Whatever happened to the 'can you predicted the weather better than Jos the Boss?' game?

Rutherford said:
Why, what has happened? It's quite a bit more exciting than last season, is it not?
Click to expand

It is a bit but its just years of frustration coming to the top. I don't follow any particular team or driver, these cars do nothing for me and the tight nature of the regulations means the technical side is lost in minute detail instead of massive game changing breakthroughs.

I get the arguments for the Halo but its another awful solution to the problem.

Sadly I watch F1 more out of habit these days than love.

cider_and_toast said:
It is a bit but its just years of frustration coming to the top. I don't follow any particular team or driver, these cars do nothing for me and the tight nature of the regulations means the technical side is lost in minute detail instead of massive game changing breakthroughs.
Click to expand

Double diffusors, F-Duct, Blown diffusors, S-Duct, it really seems there has really been nothing similar in the last few years, only noteworthy differences in the design of the engine.