Back in 1986, when the Iron Curtain still divided East and West, the visionary that is Bernie Ecclestone decided to have a Grand Prix in a Communist country. Some say this was the beginning of the end of Communism and Bernie should be mentioned in the same breath as Reagan and Gorbachev, Thatcher and Yeltsin. Personally I think this is a load of old cobblers. Bernie knew he could turn a buck or two and with Hungarians starved of top line sport, apart from football, he knew they would turn up in their droves; which they duly did.

Fast forward 30 years and we are still making our annual pilgrimage to the Hungaroring. Communism, in Hungary at least, is a system of the past. Any trip to Budapest will present you with the usual range of crap fast food stores you now find everywhere else in the World but, at least, the city fathers in the 60's and 70's chose to build their brutalist structures outside the city so much of the original architecture is still preserved.

So what has happened at this circuit over the last 30 races? Nelson Piquet won the first for Williams. Many think of this as a Williams circuit, and they have won 7 races there. However, McLaren have won 11. I suspect Ron Dennis would give his right arm to win this year, although perhaps not as this would spoil the symmetry of his body and put him into OCD overload.

Back in the early years the Hungaroring was often referred to as the "Monaco of the East" as the the races often were very processional and featured little overtaking. That said, Piquet's overtaking maneuver on Senna in '86 and Mansell's on Senna again in '89 are both worth tracking down on YouTube. Damon Hill very nearly won for Arrows in 1997, after being dumped by Williams, and Jenson Button took his first win at the wheel of a Honda in 2006.

Lewis Hamilton has the best record of any driver currently on the grid, in Hungary, with 3 wins. But it's worth remembering that Danny Ric won in 2014 and Seb Vettel in 2015 and, I seem to recall, it has resulted in this race being voted close to the top of CTA's "Race of the Season". I'm not sure if this was a reaction to somebody other than Mercedes winning but the races have been anything other than a procession in the last few years.

Here's a bizarre fact (courtesy of Wiki), for the first 20 years there wasn't a wet race in Hungary. I think the last 10 years have made up for that.

So, Happy 30th Birthday to the Hungarian Grand Prix. Please serve us up a few surprises. Something more than a Mercedes 1-2 on the grid and 1-2 in the race would be nice. Red Bull believe they might have a chance here, with all it's tight twists and turns. I'm sure Ferrari would like to break their 2016 duck but I'm not that hopeful.

Behind these three teams I suspect we will be looking at the also rans. Williams will continue to be a bit crap and be behind Force India and Toro Rosso here as their car doesn't really like corners all that much. You would think the engineers as Williams would have considered that the car needed to go round corners when they first designed it.

McLaren might be able to mix it with the midfield runners a little more here, with only one long straight for their GP2 engine to have to worry about. At the back Haas and Renault will struggle for pace and reliability. Manor and Sauber will just struggle. What might be interesting is the rumour that Sauber will have a new investor. If they bring in some serious money I would suggest they give both drivers and Monisha Kaltenborn the boot but then I'm not investing so they aren't going to take any notice of me.

Contributor
Watched the Europen F3 race here earlier in the year and they've completely resurface the track. All the bumps are gone and apparently there is suddenly masses of grip. F3 cars were going significantly faster than they had previously so I expect F1 cars to smash lap records.

I've mentioned in several of these threads that I keep track of 2016 pole laps and how much faster they are than previous seasons and use that to predict pole laps for upcoming races. The qualifying prediction for Hungary is something in the 1:19.8 - 1:19.9 region, but if the track has been resurfaced then the outright circuit record set in 2010 by Vettel (1:18.773) might well be beatable. The official lap record probably won't be touchable though as the predicted fastest race lap is in the 1:23s whilst the lap record is 1:19:071 set in 2004.

Incidentally this is the outright record lap:

Staff Member
Premium Contributor
It's only 12 seconds long but it's still a staggeringly good overtake:


As we all know, this is what drivers can do when they have more power than grip.

It's a brilliant overtake. especially since a lap earlier he also tried an overtake (from the inside), but drifted out, so Senna could retake the spot.

I'm really looking forward to the inter-team competition between Lewis and Nico, but especially what maybe developing with Daniel and Max. It will be interesting to see how Ricciardo may react, if Verstappen can continue to turn up the heat.

Contributor
It is about time that Mercedes win at the Hungaroring as it is the only track they haven't won at in the hybrid engine era.

Contributor
Ferrari are pretty good round it too.

I would say Ferrari are closer to Mercedes than they were last year and have had the pace to win 3 or 4 races this season already. Things just keeps going wrong for them

Valued Member
Looking at Monaco, you'd expect the matte blue thing to be the challenger here... 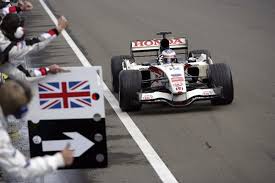 Contributor
Defo value in Verstappen, but enough to win? Depends what happens at turn 1!

F1Brits_90 said:
.. also i was looking at the last 10 years seemingly with exception of 2007 its a race that the underdogs seem to thrive on
Click to expand

So it seems that in the past 10 years whoever won the Hungarian GP was different from the one who ended up winning the driver's championship. Let's see who wins this time and then we can draw some conclusions (hopefully it'll be a Mercedes boy).

McNish seems to think Red Bull will be a huge threat and Mclaren could perform well
Hungarian GP: Can Red Bull's Daniel Ricciardo win at Hungaroring?

I hope Ricciardo wins if it aint Hamilton

Last year Ricciardo had confidence in his braking to make some demon passes and the only one who was able to run a good pace on hard tyres
Last edited: 20 July 2016

Watching fp1 on sky & discussing a future verstappen/riccardio rivalry next season if they are challenging for a title. Made me think imagine Hamilton & Verstappen in the same team considering there fiesty on track behaviour, fireworks aplenty. Would make toto long for Lewis Nico days