Contributor
The F1 championship rolls into familiar territory, Silverstone, where it all began.

1. The 1954 race had a record seven drivers sharing the fastest lap. Can you name them all?

2.1955 saw Aintree arrive on the scene, but what corner name does Aintree share with the modern Silverstone track?

3.On the 30th June 1963 Tony Maggs claimed his third and last podium. Which constructor did he score them all for?

5.What year is this track programme from?

6.The 1985 British Grand Prix was the fastest ever, but since refuelling was banned in 2010 have any of the Italian Grands Prix been quicker (Race average speed)?

7.Which year is this lap chart from? 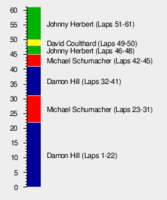 8.The 2003 Grand Prix saw the only laps led by which driver?

9.Back to modern times, Vettel, Alonso, and Räikkönen have every fastest lap since 2005, but who has the most?

Contributor
to many old questions for me.