With the flyaway races finished for the time being the F1 bandwagon rolls into Europe for the first time for the Spanish Grand Prix. Traditionally this race hasn't provided the most entertaining of races with the pole sitter more often than not going on to win the race. 2011 was no exception as pole sitter Sebastian Vettel went on to win the race, however he wasn't by any means cruising as Lewis Hamilton charged him down and almost managed to take the lead off the young German but ran out of laps as he just couldn't get into the DRS window around a track that is difficult to overtake on.

Going into this years race it is virtually impossible on who is going to win the race. So far there have been 4 different winners with Jenson Button, Fernando Alonso, Nico Rosberg and Sebastian Vettel all having stood on the top step of the podium so far this season and there hasn't been any team which has been consistently at the front at all four races with everyone having their fair share of problems and also benefiting from other peoples problems. The only truly consistent teams seem to be in the regions of midfield with teams like Williams who are now regular contenders for points after their 2012 car is proving to be far better than their dismal 2011 effort which barely managed to get a point and they have already surpassed last years total in just 4 races which isn't a bad achievement considering both drivers weren't exactly tipped for great things this season.

The buzzword at Mclaren at the moment and particularly for Lewis Hamilton is undoubtedly pit stops after a series of poor stops destroyed his race in Bahrain and also in Australia when he got caught out by the safety car. Jenson Button has also been affected by poor pit stops which show how these aren't isolated incidents and it is something that Mclaren urgently need to address as there is virtually no chance of getting on the podium let alone winning a race if they keep botching pit stops, for example, Hamilton lost well over 20 seconds from just pit stop problems which robbed them of at the very least 4th place if not a podium but this was probably unlikely given the supreme pace of Raikkonen and Grosjean in the lotus cars.

Indeed, lotus finally managed their most consistent race of the season and showed that they have designed a very fast race car as Kimi Raikkonen very nearly won his first race since returning to the sport in only his fourth race as an aggressive race saw him get within striking distance of leader Vettel but ultimately fell slightly away and had to settle for second which was still a fantastic result and with Grosjean finishing a comfortable third things are looking up for lotus going into the European season.

Barcelona is traditionally a hot and dry race although there have been wet races before although there hasn't been a rain affected race for a good number of years now. However it will be still difficult to suggest a possible winner as it depends who was the most productive at the Mugello test which starts today (Tuesday 1st May) and teams like Ferrari are banking that the raft of updates and upgrades that they will bring to the car for Barcelona will kick start their stuttering season which would be a boost for Fernando Alonso at his home race and an improved car would easily give him a good chance of a third drivers championship as he has already won a race in the below average Ferrari that is lower points at best at this moment in time but that could change for Barcelona and they will need to otherwise heads could be rolling at Maranello if Ferrari are out of the Championship before it has barely got going.

Michael Schumacher for pole and win, you heard it here first!

Red Bull again for the pole and win

Contributor
Grosjean could be a good bet - although Raikkonen seems more likely to take the victory.

Oh well, guess the best thing that can be said about it is that its slightly more interesting than Valencia..

It did ruin that lovely elongated double right hand bend didn't it. It's a shame that they changed it.

Contributor
This is the Grand Prix I spend most of singing "The animals came in two by two huraah! hurrah!" and when I'm not doing that I'm napping and waking up with a jerk thinking "oh my god I'm missing the Grand Prix" only to realise its Spain and I haven't missed anything.

Valued Member
Not too much of a grid Arc last year:

Valued Member
Points scorers in Spain by the 10 point system over the last 10 years: 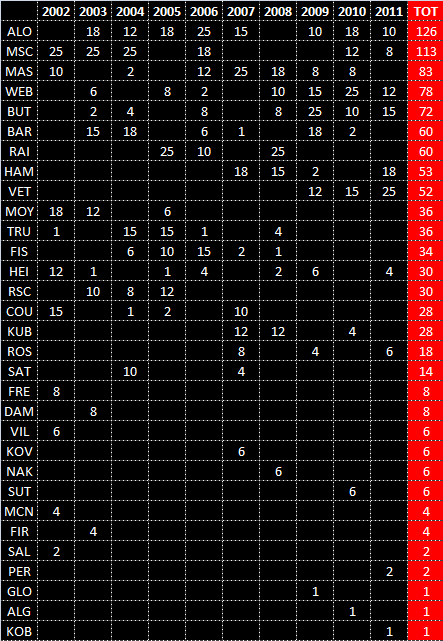 Contributor
Wow - a lot of dudes on 6 points there.

Don't shoot the messenger, some rain expected at 12 on race day...

Contributor
Why would we shoot you? That's great news, hopefully a Spanish Grand Prix in which drivers can actually overtake!

Actually makes mr hamilton sound like he drives to look after his tyres.

"In Lewis’s case, the result was a McLaren that mid-corner was pointing virtually straight towards the exit, giving him a nice, clean run onto the straight with the minimum of load."

"Lewis kept the McLaren much straighter on exit, freeing the car of load, and was then much less ambitious with his turn-in territory."

"By superbly soft initial steering inputs and velvety use of the throttle. Fernando was on full power sooner than Lewis but I daresay Lewis was quicker, thanks to the load he wasn’t thrashing through the car,"

RasputinLives said:
I'm napping and waking up with a jerk
Click to expand


Well, if you insist on drinking Jeager Bombs that's what you are going to get.

Contributor
Hope this is a better race than last year with the cars seemingly being a lot closer this season. Eventhough there was some overtaking last year Red Bull on pole by 1 second and only the McLarens and the Red Bulls finishing on the lead lap wasn't all that exciting for me.

Valued Member
I've spent the last little while thinking this was the European GP at Valencia. Doh!

And now I'm realizing that I have no memory of last year's Spanish GP and I'm doubting I even watched it. But I have no idea what else I would've done!

Overtaking was way up (http://cliptheapex.com/overtaking/circuits/catalunya.55/) so it must've been at least a reasonable race.

Staff Member
Apparently it was quite good.

The 2011 grand prix was magnificent,

Alonso charged from something like 4th or 5th to lead after the 1st corner, then you remember how turkey 2010 the top 4 cars were within 3 seconds of each other until the cash?

It was like that for the first 2 stints of the race with Alonso leading Vettel, Hamilton and Webber covered by 3 seconds.

Then the Ferrari couldn't handle the hard tyres and got lapped by the end.

Hamilton pitted for the final stint about 3 or 4 laps later than Vettel which meant he initially dropped back but because his tyres were so much fresher he closed right up onto Vettel and for the last 7 - 10 laps Hamilton was within 1 second of Vettel, nose to tail for the whole lap and then using KERS, DRS and slipstream on the mainstraight.

The Red-Bull had good traction out of the last corner which aloud it to build a gap but the speed of the McLaren on the straight had Ham closing right onto his gearbox before the breaking zone again. Tantalisingly close. The last 7 laps of him oh so nearly passing him were super tense

quite good, but it doesn't show how tense the last 7 laps were unfortunately