At one stage of this season it looked like we could have had a Championship battle as close as 2010 if not closer, but after Sebastian Vettel's 4th victory in a row, it appears that he has a third title in three years in the bag. A determined second from Alonso limited the damage, but he has to finish ahead of Vettel at almost all the remaining races to take his own third championship, and at this moment in time, that appears very difficult with the pace of the Red Bull.

Despite the hype, India once again delivered an underwhelming race with Vettel taking his second win at the track and at a canter as he was rarely troubled throughout the race, only late troubles with the 'tea-tray' threatened to derail his victory but this was but a minor bump on the road and from looking a distant contender after an alternator failure at Monza but since then he's taken 100 points from 100 available to completely change the face of the Championship, it feels like 2011 all over again.

It shows how quickly F1 can change that until lap 23 in Singapore, it seemed like McLaren would take their 4th win in 4 races and that Hamilton would close the gap to Alonso and increase his chances of a second world title. But a gearbox failure and suspension problems (and astroturf) in Japan and Korea evaporated any chances he has and he looks forward to a fresh start at Mercedes next year. From having the quickest car at that point, it seems that McLaren were unable to stop the Red Bull onslaught that has pretty much wrapped the championship up in one sharp autumn burst, the only thing that can stop it is if Red Bull's reliability problems rear it's head again and I feel that this is Alonso's best chance of overhauling Vettel's ever increasing lead.

But Abu Dhabi is a track where Red Bull have been strong at, Vettel won in 2009 and 2010, and qualified on pole in 2011 but a first lap puncture prevented him from probably making that three wins in a row, however he might not have won in 2009 where Hamilton had to retire from the lead with brake problems. McLaren themselves have been strong here in the past with both Hamilton and Button on the podium for them in 2010 and 2011 (Button has been third every single year at the track as he finished there in 2009 for Brawn). But their championship hopes, both in the WDC and the WCC are over after a poor last 4 races which took them out of contention.

However, if 2012 has shown us anything, it's that nothing is certain. After Germany it seemed that nothing was going to stop Alonso from taking a third world championship and for various reasons, his formidable lead has been wiped out. The updates Ferrari made for recent races has ensured that he can fight for the podium, but he'll need extra if he is to take the title, whether Ferrari can do that or not remains to be seen, but after the mistakes of 2010 where they lost the title, they will not want to see another title slip through their grasp, another failure will not look good on Domenecali, and it is very probable that Luca de Montezemelo would see it as a failure if Alonso doesn't win the championship this year.

Contributor
Just before he built this circuit Tilke was given a pair of parallel rulers. He used these to design the track from turn 11 to 1 inclusive.

I don't see how it's considered smart to have long straights, then technical sections, mix them together at least

Daft though it may sound the track might a little more exciting if they went in the opposite direction. All the technical mampy pampy bits at the start then the 2 long drag bits in to interesting corners then, what is now Sector 1 as Sector 3 to allow everyone to have a rest..........oh well that's me dreaming.

Valued Member
Neither Vettel or Hamilton have been beaten at Abu Dhabi by anyone other than each other in qualifying or the race where they have finished.

Contributor
I find it difficult to see past Vettel and Hamilton as favourites for this year, too.

Contributor
I find it difficult to see past Vettel as favourite for this year.

Edit to prevent annoying anyone.

Valued Member
Wonder if Seb will have his sparkly helmet or was that "retired" after Singapore?

FB said:
Wonder if Seb will have his sparkly helmet or was that "retired" after Singapore?
Click to expand

The Seb's Helmet gets changed for each race now, well he has to keep them clean and the sponsors happy, and his mum would be proud of the hygiene..

I think he was actually using an old one for India!

It is now time for McLaren to step up to the plate and realise the potential of their car and drivers. McLaren could have helped Fernando Alonso's cause a great deal in India had they geared the car to overtake, kicked the softer tyre into the weeds and gone for a two stop flat out strategy.

If McLaren pull their collective finger out of their ass they can exert enormous influence on the direction of the next WDC. And I contend that it is not in the interests of McLaren or F1 for Sebastian Vettel and RBR to win three championships on the bounce.

To anyone at McLaren who may be reading this I implore you to use the strengths of your drivers and car and stop conserving tyres and under fuelling your car. It is futile to conserve fuel when you are stuck in traffic, travelling half a second a lap slower than your car would go if it had 20 litres more fuel in it!

Contributor
Everyone was able to push the car close to the maximum on the hard tyres in India and I based on their lap times McLaren didn't have the pace advantage on the hard tyre to make up the 20+ seconds lost pitting a second time and having to overtake cars in the process.

McLaren seem to have very good low speed grip and better straightline speed than Red Bull, so I expect them to be just ahead of Red Bull in Abu Dhabi with Fernando lurking close behind.

Contributor
McLaren are now 2nd best in qualifying trim, and 3rd best in race trim, in my opinion. I think the only team that can stop Red Bull from winning both championships is Red Bull.

Contributor
The DRS zones for this year are similar to last year, except that the first zone has been extended a bit. When will the powers that be ever learn that it is better to fix fundamental problems rather than providing a sticking-plaster solution? It's not as if those in Abu Dhabi have no money left.

Kamui-FastestChefInTheWorld - that's exactly why they don't open it up - they were worried that the speed into the hairpin would mean that if anything went wrong, the cars would barrel straight into the barriers at full speed, and send debris into the crowd! - it's to do with there not being enough run-off for the speed of entry!

The Artist..... said:
Kamui-FastestChefInTheWorld - that's exactly why they don't open it up - they were worried that the speed into the hairpin would mean that if anything went wrong, the cars would barrel straight into the barriers at full speed, and send debris into the crowd! - it's to do with there not being enough run-off for the speed of entry!
Click to expand


Put barriers there, then? I thought they had money...

Valued Member
Apart from Malaysia we havent had any wet races this year which is disappointing, looking at Abu Dhabi and USA, it seems that Brazil is the only hope but I'd be surprised

Kamui-FastestChefInTheWorld - there are barriers - the problem is the lack of run-off (relatively).... - The designers of the circuit wanted to get the crowd close to the action. However, they've essentially forced themselves to have an awful hairpin, which is completely devoid of excitement! 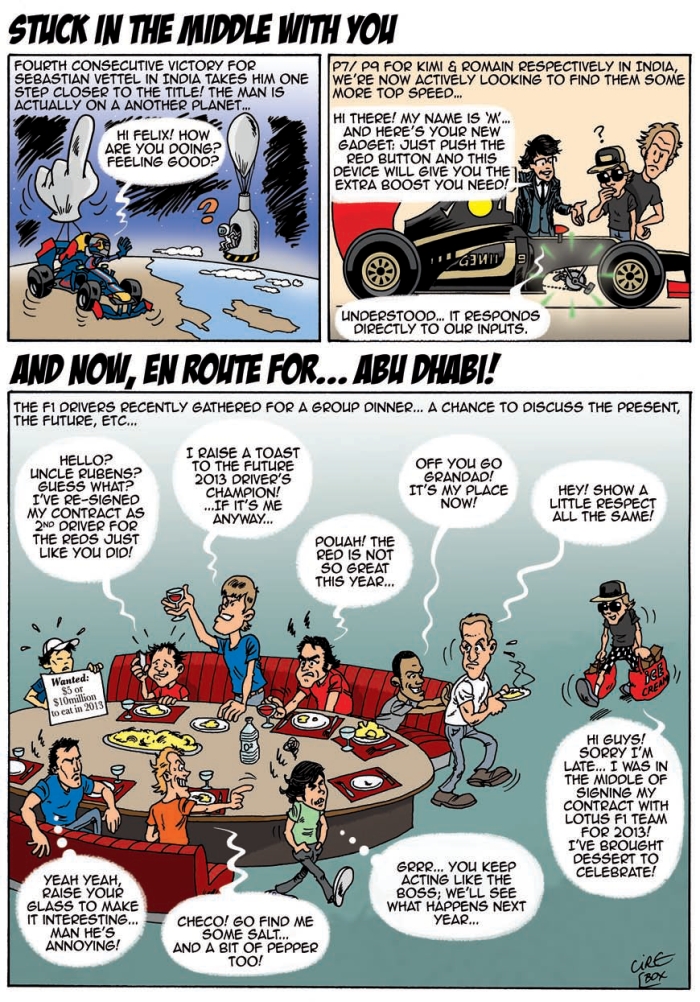