Contributor
Hi everyone, here is the Tyre Analysis for Japan. Through judging fuel level and reference fast laps a benchmark time is made, the seconds away from it is shown on the x axis. As tyres wear the benchmark becomes harder to achieve. And we can see the tyre wear on the graph. A big thank you goes out the Sushifiesta and Jez101 who created the excellent spreadsheet (the link to it is at the bottom). I think that’s all so shall we begin? 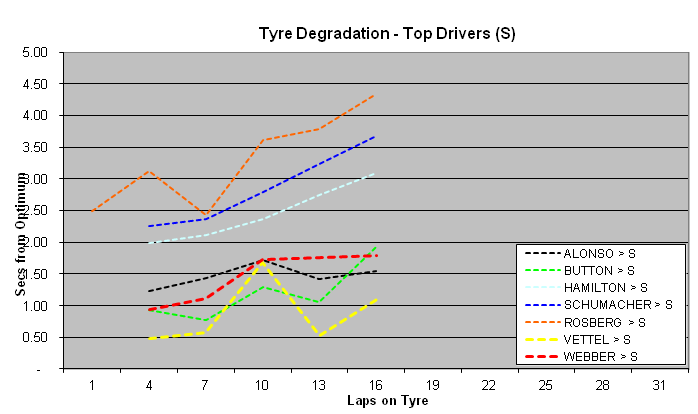 So, the average of all of the Soft Tyre stints, all the drivers in this graph except the Mercedes drivers went with used Soft’s for the first three stints, before using new medium’s at the end. Schumacher managed to save a set of new Soft’s for use in his third stint, whilst Rosberg started on new Medium’s, then had two stints on new Soft’s before a final stint on Used Soft’s. (If tyre’s are used their extra wear is taken into account.) We see the tyres doing a much better job than you got the impression of in the race. If the previous races extreme drop-off also applies here, then they may have not had long left. Rosberg, Schumacher and Hamilton were all having a gradually steepening line, whereas Button and Vettel started to lose time quite sharply towards the end of their stint. Alonso keeps his tyres well in the Ferrari we have seen earlier in the season, whilst Webber does a good job preserving his tyres. 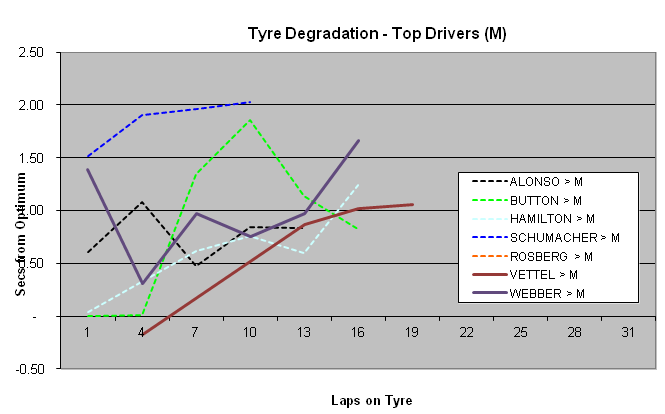 The Medium tyres had a very predictable and gradual wear pattern, as can be seen with Hamilton and Vettel in particular. Around lap 13 both Hamilton and Webber (both very hard on their tyres) start to lose some time, but the race ends before it is a significant problem. Button seems to go well of the rails mid-way through his stint, but it is likely that this was just him backing off, for fuel consumption, before speeding up again later on. The spreadsheet can’t detect that, so it would seem that Alonso was never going catch him anyway and the situation was under control. It does seem as if the Medium tyre is wearing at similar rate to the Soft’s, but is just slower, again questioning the point of the two compound rule. Rosberg’s early traffic nightmare means that there was only one usable lap in his entire stint. 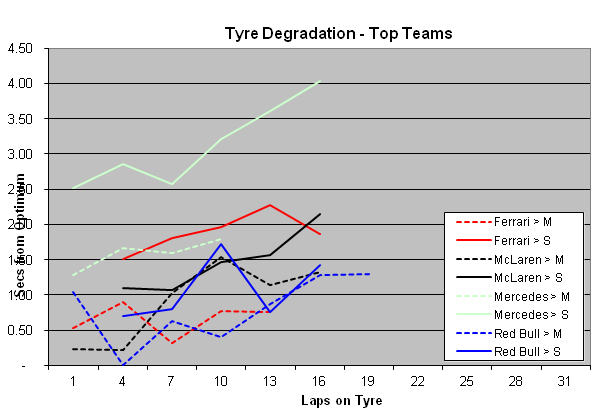 This graph shows how the teams fared in the race. Ferrari protected their tyres, not experiencing any particularly dramatic drop-off. The Mercedes’ on the other hand really butchered their Softs, losing speed by lap 7. Neither stayed on the Medium’s for very long at all. Their rear tyre overeating was once again being an issue. McLaren also lost their Medium’s quite early on, and the Mediums show a similar pattern to the other teams, including Red Bull, who kept them on longest. The ‘cliff’ appears to be a few laps after everyone was done using the Medium’s. 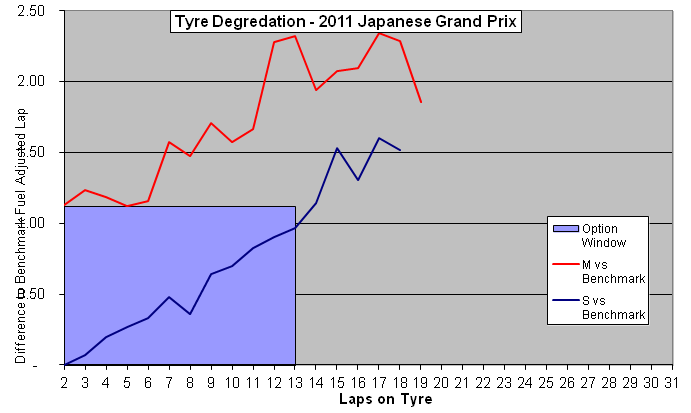 This graph also shows how both tyres wear at a similar rate, I think Pirelli got it wrong, and should have brought the Hard tyre to Japan, so that we could see some varying strategies. With Softs being favourable for 13 laps, four stints on them would have survived the race, so Mediums wouldn’t have been used if it wasn’t compulsory.

MORE DATA? If you wish.
https://docs.google.com/leaf?id=0Bw...ZmU3MC00NDA1LTk3MjAtMTNhZjcyMjRiYTkz&hl=en_US

Valued Member
I can't say often or loud enough what fantastic work this is by everyone involved!

Particularly interesting is to see how drivers' usage of the different compounds differs in itself. Obviously there are various potentially confounding factors, but a lot of it concurs with the 'armchair analysis'!