Contributor
Here are the results for Austin.

teabagyokel and Hamberg joint biggest (and only) winners.
We loose grizzlyadam from the game. 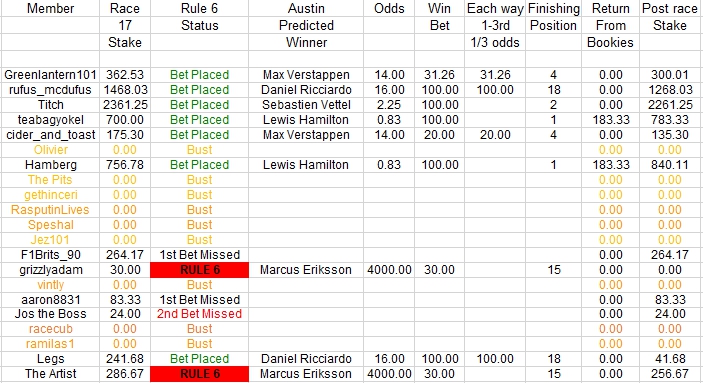 Here are the odds for Mexico.
Good luck.

Contributor
Sod it, everything on Hamilton for the win.
Last edited: 23 October 2017

Premium Contributor
100 on Vettel for the win . Ta.

about bloody time. i got some luck

even if it dead cert because everyone knows kyvat dumped means Verstappen wins although im tempted to look back to see the last time i had a profitable bet. as i can't remember its been so long

Contributor
Here are the results for Mexico rufus_mcdufus the biggest winner

Greenlantern101 and Jos the Boss are out. 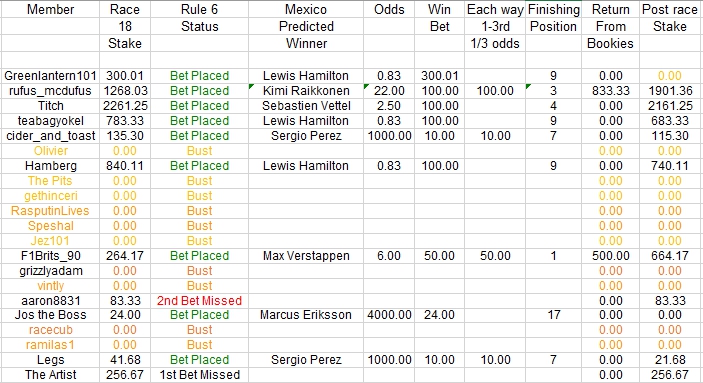 Here are the odds for Brasil.
Good luck.

Valued Member
If i had any cash left, i would be putting ig on the Hulk.

I hate that this is applied to anyone who does like one good lap when it's slightly damp now days. Let's get this straight. Max went well in the wet last year but he was certainly never anywhere near the heights of Senna Donnington 93. For a starters he didn't win against a car so incredibly vastly superior to his that it might as well have had warp engines.

i dont see how you disagree RasputinLives . for me its up with kimi Japan 05, Lewis gb 08, button canada 11. as 1 of the greatest drives ive seen live. mistakenly put intermediate tyres just as heavens opened. so had to brought in again to put him back on wets. & found himself 14th, then in space of 12 laps (not 1) he carved his way through the field having me out of seat so many times. other drivers were struggling to overtake & max would pull up find grip where others couldnt going inside outside making some fabulous overtaking moves on likes off Bottas Riccardio Hulkenburg Vettel Sainz & then Perez

it was almost senna eqsue becayse was similar to Monaco 1984. for 19yr old in his 2nd season as f1 driver. to show that level of car control against seasoned professionals was outstanding & you search it on Google. its not just me with that opinion it was the unanimous verdict of the media

Greenlantern101 said:
Can we keep this on topic please I don't want to have to play 'hunt the bet'