Contributor
Pretty much reinforces my earlier statement about the quality of the opposition been overtaken. The lap data is also pretty decisive too. Without the other driver incidents Vettel would have struggled to break double figure points.

But who did you expect him to be overtaking at the back of the grid?

This chart is taken from the FIA website, I used this one because it shows where the accidents were. 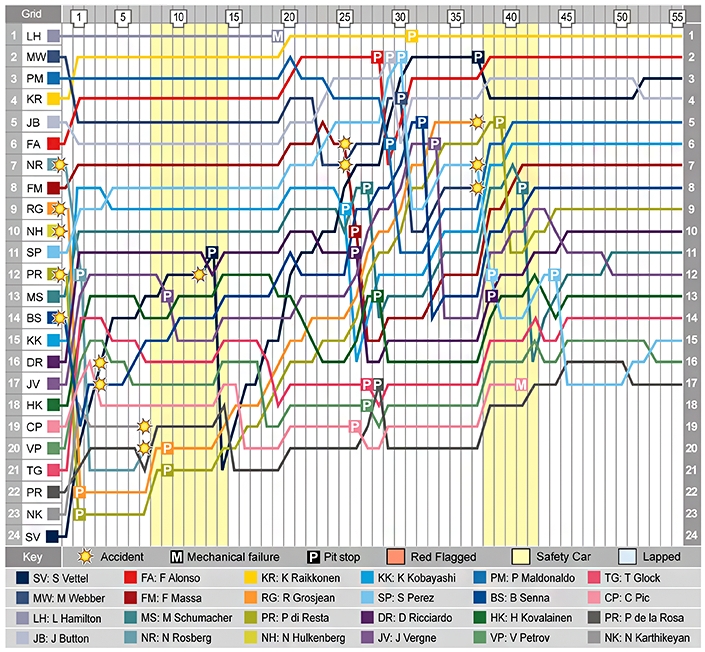 As we can see, from lap 14 when Vettel was back in last position (albeit now 21st) he gained 1 position on lap 19 from Hamilton's breakdown and one position from Massa’s spin with Webber on lap 25. Webber stayed ahead of Vettel when he spun but we know he’d have let him past but was pitted out the way anyway. Maldonado also had a KERS failure so was falling back too.

The other incidents (unless I’ve missed one) happened behind him.

The chart actually shows just how many he jumped in the pit stops!
M

Contributor
Bugger I can't be bothered to decipher that...

Valued Member
With Sebastian Vettel anything is a criticism, isn't it?

He came to the back of the top drivers in their pit window. At the rate he was catching them, does anyone seriously think he wouldn't have passed all the drivers he was behind if he'd had the chance?

Contributor
I don't think that he would have passed either Alonso or Raikonnen, nor Button had he not been given the catch up by the safety car.

Vortex said:
The chart actually shows just how many he jumped in the pit stops!
Click to expand

I only make four: Webber, Maldonado and the Saubers. He obviously passed Alonso and Button in their stops, but lost those places in his own stop.

So it is! Have to admit I didn’t actually tally up how many he jumped in the stops, just glanced. Guess he actually overtook more than I thought.
M

Contributor
I read that Lewis has said Vettel was very lucky to get on the podium starting from the pit lane he said he was the luckiest driver on the grid, now I don't know if that is sour grapes because Vettel is on for his third title or media hype...

As did numerous others.
M

Contributor
Oh I have no doubt that he was lucky, I only mentioned it because it was posted on teletext...

One thing that I don't think anyone has mentioned yet is that Mark Webber's crash directly played into the hands of Vettel, as it immediately eliminated the gap between Vettel and JB that had been caused by his second stop, and on new, soft, tyres, it was never going to be easy for the McLaren to keep him behind.... Now, if it was Briatore in charge of Red Bull, people might have jumped to conclusions by now!

Contributor
If Webber had been the instigator of the crash then yes indeed conclusions could have been jumped to. It was a combination of Perez and Di Resta having fun on and off the circuit which sent Grosjean hurtling into Webber!

True - but being utterly cynical here, don't you think that Webber could have done more to avoid Grosjean?

Mephistopheles said:
Oh I have no doubt that he was lucky, I only mentioned it because it was posted on teletext...
Click to expand

I though teletext was shut down?

Contributor
Very possible, we all know Webber would do anything to help out Vettel.

F1Yorkshire - Just to clarify, I don't for a minute think there was anything untoward going on - it's just amusing that one Red Bull loses out whilst the other gains.....

The Artist..... said:
one Red Bull loses out whilst the other gains
Click to expand

Mark Webber said:
Not bad for a number two driver.
Click to expand