For some strange reason, some people have gotten it in their mind that Vettel’s race was greatly aided by safety cars and crashes. Somehow forgetting that the first safety car put him back 10 places and messed up his tire strategy.

After de la Rosa had problems on the grid, he started behind Vettel in the pitlane. With 2 cars out in turn 1, this means Vettel was 20th when he emerged from the pitlane to chase down the field. By lap 8, he was in 13th position, having overtaken 7 cars on track, before the safety car came out. Behind the first safety car, a hard braking Ricciardo caused Vettel to return to the pitlane for a new front wing.

When the safety car went in, he was 21st behind Paul di Resta. When Hamilton retired 5 laps later, Vettel was 12th, having overtaken 8 cars on track, and Grosjean twice (Vettel let him pass after uncertainty about the first overtake). He overtook 3 more cars and took p8 when Kobayashi pitted, and p7 after Massa spun. When Alonso, Maldonado, Webber, Button, Perez and pitted in the next few laps, Vettel was 2nd. Pitting in lap 36, Alonso and Button passed him again, before the safety car came out again when Perez, Webber and Grosjean came together. This closed the 10 second gap between Vettel and Button. In lap 52, Vettel overtook Button as well to take a 3rd place finish after starting from the back of the field twice.

I made the same point earlier that the first safety car actually hurt him not helped him as it put him back into last place (well the incident whilst following the safety car did, which wouldn’t have happened without a safety car obviously). But it seems easier to excuse his drive from last (twice!) to third today by saying its because there was two safety cars.

Sometimes I don’t think he gets the credit he deserves, and today he deserves some.

Valued Member
Cue the debate about how difficult some of those moves were...2 HRTs, 4 Marussias, 4 Caterhams, 2 Toro Rossos, 3 Sennas...at least he made it past without making contact (well almost).

And how difficult would those fellas have been making it for him (Senna excepted)?

Out of interest, since 2004 that other noted passer, Jenson Button is the record holder with 26 passes in last year's Canadian Grand Prix. It looks as if Vettel is slotting into second on the list.

Contributor
I spotted one very wide Toro Rosso on my screen. What the hell was that all about!! Where is Max when you need him

I'm not quite sure on the all-time list of overtakes, but this could well be up there somewhere. Was Button's number including or excluding pit stops? Because that would make +7 for Vettel.
M

Contributor
The way I saw it was, that every time Vettel had bad luck it ended up being a massive dose of good luck today he was charmed..
M

mnmracer said:
I'm not quite sure on the all-time list of overtakes, but this could well be up there somewhere. Was Button's number including or excluding pit stops? Because that would make +7 for Vettel.
Click to expand


Since Button made six pit stops in that race including a drive through I very much doubt he overtook anyone due to them...

Without the first safety car, Vettel would not have had to pit for a new wing and would have gone for the planned one-stop strategy, after which he could have switched to a fresh set of soft tires (rather than run down a fresh set and then switch to a used set). How is this a massive dose of luck?

Vettel first damaged his wing during an overtaking manouvre. He then exacerbated the damage behind the safety car. However, the way it panned out he was able to minimise his problems and the time lost, stopping for the wing change later than otherwise would have been the case, cpmbining it with his change of tyres.

His lap times were unaffected by the damage from Senna.
Again, how is changing your tire strategy at a point where you've been unable to get the best from your tires an advantage?

Make of these what you will ... 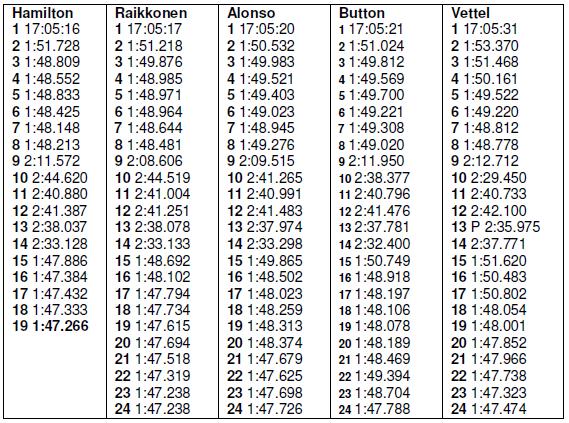 Vettel's early laps with a damaged wing are quite remarkable.

Contributor
Looking at the drivers that Vettel overtook there are some interesting names there.

Before the first safety car the drivers he overtook were all but one knocked out in the first stage of qualifying. In that stage Vettel's fastest lap was 1:42.160 against the fastest of the drivers who were knocked out was 1:44.058. So he had a car that was over 1.8 seconds faster on the quickest of those, and their times were set on the option tyres whilst Vettel's was on the primes. The only other one before the first safety car was Senna, who had a best time in qualifying of 1:42.330, once again on the options, I cannot recall, and cannot be bothered too look up, what tyres Vettel used in Q2 but his time was 1:41.511. This is 0.8 seconds difference, but then Vettel had to take two bites at the cherry.

I could go through all those between the first and second safety cars, but it's late and the story is very similar. The exceptions were Grosjean and Button. Vettel's time in Q3 was 1:41.073, whilst Grosjean's was 1:41.778, seven tenths difference, whilst Button's best on primes was 1:41.873, exactly eight tenths.

Since Vettel's car had been set up for maximum speed he had an advantage in that it was still quick enough to catch the drivers in front of him and then he had a big advantage once he got into the DRS zones.

Vettel drove well, but he was helped greatly by the second safety car (he simply would not have caught Button), his problems from the first were of his own making.
M

Contributor
The point is that because he had to stop and put a new wing on put him on fresher tyres than everyone else at every stage of the race which is why he managed to overtake people because while their tyres were going off his weren't which is why I say every time he had bad luck it turned into good luck..

This isn't me being unkind to Vettel it is simply how it turned out, in fact at one stage I thought he was going to win the race because of his good fortune...

Who needs good fortune when you have the RB8

gethinceri The front wing damage behind the safety car forced them in, not their tires.

I don't remember seeing him get past Vergne, Schumacher or di Resta on the TV feed so I'll reserve judgement about those, although di Resta was backwards or in the pits most the time, Schumacher made a pit stop at a strange time so must have been struggling and the Toro Rossos were never going to be much of an issue.

The move on Button was good but required a willing partner and that leaves just Senna and Grosjean - and he lost a part of his front wing against Senna and overtook Grosjean off the circuit initially.

I don't know, it was an impressive result but it wasn't the sort of charge through the field we've seen in the past, it was more about being on the pace of the leaders (which you would expect considering the car he was in and the way it was set up) and being in the right place at the right time. This race must have had more incidents than any other dry race for a very long time, I would guess, so keeping your nose clean already guaranteed a good result (not that Vettel kept his nose clean, having said that!)

Valued Member
If you're in the fastest (in this case at the specific race joint with McLaren) car, it would be expected that Vettel would shoot through the field, when the car is purposely set up for the race 100% unlike all the other cars, it reinforces that advantage, however, he was given a massive hand by cars in front tripping over each other (although he would have overtaken them anyway but it might have slowed him down a bit in doing so), the DNF of Hamilton who was cruising at the front, and the timing of the safety cars which meant he was able to change his front wing for very little time loss as cutting through the back markers didn't inconvience him. It's a good drive, but not quite Schumacher Brazil 2006 or Raikkonen Japan 2005

Supporter
As far as the "luck" factor goes, I put this race nearly on par with Canada 2011.

It's not really a "drive from the back" when multiple safety cars are involved.

Contributor
It does seem to me that whatever Vettel does, there are some people who are steadfast in their opinion that it was all luck / car / rubbish opponents / cheating. If it was just this drive, then sure, fluke, but for me it all adds up over the course of a career.

Yes, Lewis would have won yesterday and no Vettel wouldn't have finished third without a bit of luck, but c'mon people! Can we try and be objective and give at least a little bit of credit when its due? You can only beat what is put in front of you and looking at the bigger picture, Saturday / Sunday could well have cost him the WDC, but who is still leading the championship? Who won the last two titles?

What more can the guy do?

(that's a rhetorical question! I have posted this to add perspective, not to start a Lewis v Jenson type of argument)