Contributor
Why? He's closer to his team mate than most other pairings on the grid. He's scored race wins and multiple podiums. Also he has completely out scored their nearest rivals second driver and Isn't too far behind their lead driver. All this in a year when Merc have not had the dominance of precious years.

I think maybe there is a little over reaction going off here.
Last edited: Oct 31, 2017

Contributor
He stands every chance of getting Mercedes a 1-2 drivers in the WDC to go with the WCC. They have no need to move him on in 2018.

I wouldn't switch Bottas and Ocon at this time. We know that Bottas is a solid #2 and sometimes when he feels like it, he can even beat Hamilton. Ocon is complete unknown, he can be a star in a year or two but promoting him to team A right now can upset Mercedes' winning proposition. And we all know that Mercedes like any other Manufacturer will bid farewell whenever they are not winning particularly when they feel that going back to the top is difficult/expensive/time consuming.

I don't think Mercedes will promote Ocon yet.. 2019 is the earliest but he does face stiff competition from Ricciardo so how Mercedes will continue his development will be interesting

Verstappen on Bottas: "You can either push or always coome second."

True, any other driver would have taken Vettel in Bahrain.

Valued Member
Depends on whether you want to win races or championships. Bottas drove outstandingly in Shanghai all weekend - outqualifying his team mate, who is a bit of a Shanghai specialist. Then executing the undercut perfectly on Vettel. Nothing he could have done about Ricciardo having been so unlucky with the Safety Car timing. He seems destined to be overshadowed one way or another.

Rutherford said:
Verstappen on Bottas: "You can either push or always coome second."

True, any other driver would have taken Vettel in Bahrain.
Click to expand

Too be honest i think it was too far back to make a pass. Just look at verstappen on vettel earlier but overtaking from too far back & wouldve been a similar situation. But the knifes are out because mercedes seat is up for grabs & if you can persuade bottas your better option

Valued Member
He’s beaten Hamilton in 5 of the last 6.

Contributor
His wife looks so much like him it worries me.

Bold move by Bottas today on Kimi. After an awful race in Melbourne and rather missed opportunity at Bahrain , he suddenly finds himself back in the title race with the results of his nearest rivals

Rutherford said:
Verstappen on Bottas: "You can either push or always coome second."

True, any other driver would have taken Vettel in Bahrain.
Click to expand

Verstappen would have tried to take Vettel I Bahrain its true. He'd have done it it into a gap that wasn't there, taken them both out and then blamed everyone else.... But he would have tried.

Every other driver would have taken Vettel in Bahrain too, Ricciardo made a similar remark.

He didn't go out blaming other yesterday did he? He admitted to making a mistake which ruined Vettel's and his own race.

Contributor
The thing is Rutherford it's very easy for every other driver to say they would have overtook him because they weren't actually in the situation. Personally I think it was a top class bit of driving by Vettel. I know that doesn't fit the agenda though.

Premium Contributor
If Valtteri Bottas wins the championship I will still view him as a stolid, non exciting driver. Sorry Bottas fans.

Bottas made amends with a robust move on Raikkonen yesterday

As for Bahrain.. it is done and dusted nothing will change that we will wait for the end of season to know if it cost him or not. Nico Rosberg changed his approach after 2015 and was much more aggressive with his race craft and passing so I think Bottas realises he has to do the same to keep his seat

Not everyone is like Mansell, Ricciardo or Montoya - when they pull off a pass they usually go fully committed and make the other driver cede the position

Contributor
Whatever your view on Bottas is you have to feel a bit sorry for him this season. We were saying a couple of weeks ago that but for a puncture taking away the win at Azerbaijan he would have been in touch with the title race. Now after his gearbox issue in Austria he finds himself in 6th!

Valued Member
With it being mid-season (sort of) I thought it would be interesting to see how Bottas is doing this year relative to last, and also relative to Nico Rosberg.

I've done an analysis of lap times in qualifying, in sessions in which both Bottas and Hamilton participated (so Q3 in all cases except MON 2017 and AUS 2018, where Q2 times have been used). The chart shows the % difference in lap time between the pair. Bar above the line means Hamilton was quicker; below the line, Bottas: 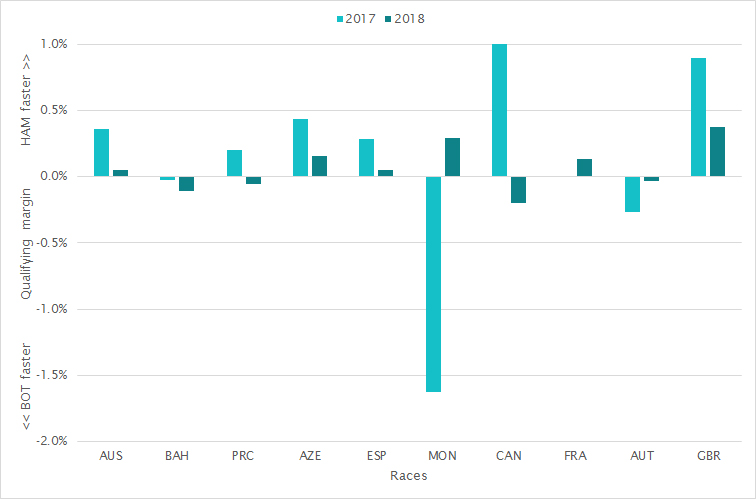 In seven of the nine races that can be compared, Bottas has performed better in 2018 than 2017 (Monaco and Austria being the exceptions). In only one case - China - was that enough to mean he outqualified Lewis at a circuit he was beaten at in 2017.

At this stage last season, even allowing for Bottas' outlier Monaco result, Hamilton's average advantage was 0.14% - just over 0.1s on the average circuit. This year Bottas has halved it to 0.067%.


I've also done the same comparison but this time looking at how Bottas' first 28 events up against Hamilton compare with those of Nico Rosberg in 2013-14 (red bars on the chart below). The dotted lines show the rolling average of all races. 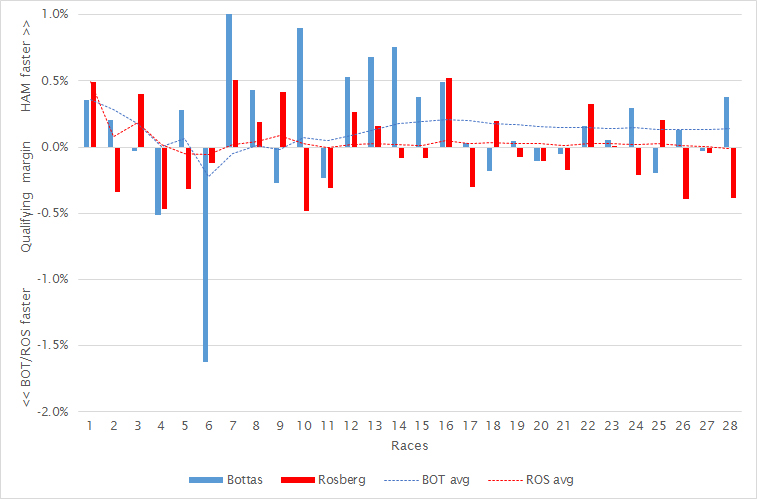 Looking at their first 10 races, they are actually quite similar in terms of performance - though there is a lot of variation from race to race. From races 12-16 Bottas suffers some poor performances, meaning his average deficit to Hamilton moves up over 0.2%, while Rosberg remained closely competitive. Those events correspond to Spa-Austin last year for Bottas.