For 2008 and 2009 he partnered Jarno Trulli at Toyota but lost his drive when Toyota pulled the plug on their F1 project at the end of '09. He managed two 2nd places, one 3rd and 1 fastest lap at Toyota, probably not much of a return for the money invested in the team. He found refuge at Virgin but has been hampered by a pretty rotten car for both 2010 and 2011.

So, Timo Glock, the real deal? A champion in waiting or a useful journey man who will never see the top step of a podium? Where does he rank against his fellow country men and his peer group? Will the Virgin tie in with Mclaren help him push forward in 2012?
Click to expand

Contributor
I like Timo but I'll probably except the fact he's never going to win a Grand Prix.

I don't think he did too bad a job for Toyota in 2008 which was technically his rookie year. Had a great drive in Hungary that year and scored a podium on merit.

Was a bit dissapointed at his strop with Virgin at the begining of the year and feel he should have been much further ahead of d'Ambrosio than he's been. Kind of feel he's just going through the motions because he knows he can't get the car up the grid further.

As for ranking him against his fellow Germans - apart from Vettel - I think he could beat them all on his day.

Valued Member
I smell a journeyman here. He was unable to consistently beat Trulli at Toyota; and we've seen what mincemeat Kovalainen made of Trulli.

So I don't think he's ever going to be great. He could hit the top step, if Lewis had made a mistake at Singapore in 09 he'd have done so, but I never rule anyone out on that front, because it is all about luck!
G

Never will be a Grand Prix Winner in my opinion. Not quick enough. As teabagyokel said he couldn't beat Trulli on a consistent basis at Toyota.

Contributor
Timo's one of those drivers how are either a hit or miss.

In his time at Toyota i thought he'd done ok going up against Trulli. But he made a mistake joining Virgin for 2010, surely other teams were looking at him for a seat I.E Renault and Williams? I do respect that he wanted to go to a new team and drag them up the field but can't help think what could have been for him.

Valued Member
Be interesting to see how things develop next year with the McLaren tie in. Might be a brilliant move by Timo?


FB said:
Be interesting to see how things develop next year with the McLaren tie in. Might be a brilliant move by Timo?
Click to expand

I don't see them moving up the grid rapidly in a year, Lotus with the Renault engines and the Red Bull gearbox (they got something else of off Red Bull aswell can't remember) haven't moved much and have only pulled out a little bit more of a gap to Virgin.

If Virgin don't improve a lot in the next two years I can see Glock wanting to move, he doesn't look happy as it is, question is, if he would want to move, who would want him? There's a lot of drivers coming in and out a lot these past 5 or so years unlike the past.

Slyboogy said:
I don't see them moving up the grid rapidly in a year, Lotus with the Renault engines and the Red Bull gearbox (they got something else of off Red Bull aswell can't remember)
Click to expand

Off topic, but Lotus is getting the Red Bull KERS system.

Josh said:
Off topic, but Lotus is getting the Red Bull KERS system.
Click to expand

Probably been noted, but Timo, in 4 seasons, has not finished above a team mate in the final standings.

Contributor
So basically he's never beaten a team-mate in F1!

... from the hardly inspiring list of Trulli, di Grassi, Heidfeld and d'Ambrosio

That coveted P12 will surely add a lot of drama to the tail-enders battle for 10th in the standings.

Here's one for ya Timo!

I got the Pit Lane Feed today and I finally got a chance to see the information I was most interested in. Sadly my suspicions were confirmed. It took an eternity for Glock to let Lewis through. So, I suppose in some peoples minds, they're even now.

You'll also note that the Lotus crew is awaiting Raikkonen.

From the FIA Pit Stop data, we know that Raikkonen entered the pits at 15:21:39

This image from the Pit Lane Feed shows Raikkonen in the box and the immediate aftermath of the Hulkenberg collision. So we know pretty much what time the accident happened.

This puts the time at roughly 45 seconds from when Glock was first shown Blue Flags/Lights to the time he let the leader through.

Contributor
I don't think Glock actually held up Hamilton that much, does the Pit Lane Feed show when Petrov was shown the blue flag? Watching the main feed on the lap you're referring to, Hamilton had to pass Petrov before he reached Glock and Petrov only let him through exiting turn 9 at which point there was a sizeable gap to Glock (presumably Glock overtook Petrov during that lap). So Glock was only in front for a few corners near the end of the lap, gave him a toe up the hill and then let the leaders pass/crash. 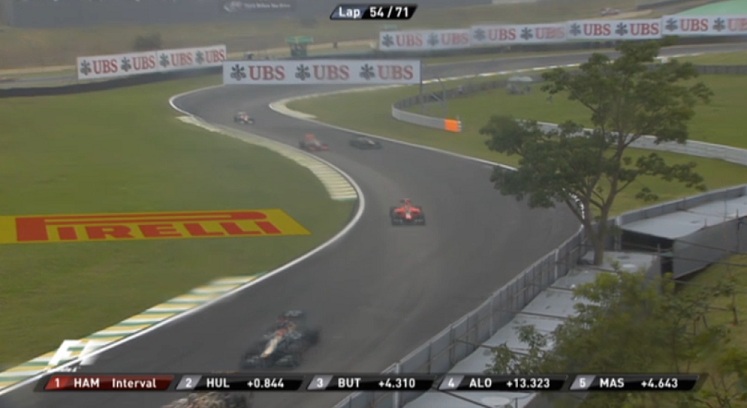 Think you made a big mistake moving to Marussia, but the best of look in your DTM career.

Valued Member
I think DTM is pretty much the level that he is at as a driver, but it is sad to see another salaried driver jettisoned for a Chequebook Charlie, whoever that well be. Hope it is someone who is more Perez than Yamamoto!

Valued Member
Shame, I thought Timo had some talent but he never got the equipment to prove it. Maybe he could have beaten Webber in the Red Bull but wouldn't have been in the Vettel standard.