Staff Member
Valued Member
I'm slightly confused. Wasn't the whole point of the new engine regs to make them more attractive to the motoring industry and attract new investment in to F1?

So, more relevant and more efficient turns out to be a lot more expensive. Who would have thought it?"

Anyhow, as long as the proles get to hear mmmmmeeeeeoooooooowwwww pop pop meeeeee meeeeee vrooooom pop pop at every race then that's all that matters right?

Contributor
But F1 has never been about relevance to the every day world.

Spectatorship, both live and via television, is down, as are revenues, so they need to do something. However, I think that changing engine specs after only two years (no matter how much I personally dislike the current spec) will add HUGELY to the costs incurred by all teams for these two years as most of their hardware will then be obsolete. I look for more teams to bite the dust because of the change. I can't imagine Honda being willing to build engines for a new spec if they have been left with obsolete equipment after huge expenditure for a single season.

Furthermore, what will Haas do now? With the uncertainty concerning power trains, it wouldn't surprise me if he either put his entry off until the situation is finalized, or backs out entirely.
Last edited: 20 December 2014

siffert_fan said:
But F1 has never been about relevance to the every day world.
Click to expand

It can't afford garagistes so it needs manufacturers. They're only going to show up if there is some relevance to the real world.

Staff Member
Valued Member
Which brings me back to my point. The whole idea behind this years regs was supposed to retain the big car makers and better still get more in. By scrspping all of that, surely it goes totally against the relevancy excuse that the car makers themselves wanted as a reason to stay in?

I wrote a thread a while ago that showed how far behind the technical curve F1 is. We have two cars in our house that between them feature turbo's, ABS, traction control, power steering, manual suspension setting adjustment, automatic gear box, engine management and a host of safety devices. Both of them cost less than an F1 steering wheel.

Peak of technology? Best drivers in the world? Cash cow? Well one out of three 'ain't bad.

Contributor
F1 has always been behind sports cars when it comes to technology. Everything from disc brakes to diesels, automatic transmissions and hybrids have appeared in sports cars first, frequently a decade or more before showing up in F1.

The other thing is Bernie usually lays down a few proposals which the teams end up squabbling over themselves rather than going back to challenge Bernie like the double points issue.

there is less flexibility in F1

Well currently f1 is drifting or should i say skidding trough the corners under the control of a dictator, so i can't understand his worries.

Think Niki explains it well what is wrong with the current formula and what it needs at 3:35:

who is saying these engines are cheaper ?

Contributor
It is certainly too late for new engines in 2015 and I would suggest that even if agreement were forthcoming before New Year even 2016 would be too close. It would once again be the engine builder with most money and least to lose who would come up in the lead again.

Valued Member
Just started this thread so we can all make our own suggestion on what F1 should do for engines in 2016 or, perhaps, 2017.

Supporter
Willy Buxton dropping knowledge at 3AM during FP2. No idea where these numbers came from.

I don't buy those numbers. Am I supposed to believe that in 118 years they went from 17% to 30%, but in two years after that they got to 50%? That's not how progression usually works.

Contributor
Diminishing returns. They're pretty close to the theoretical limit in efficiency now I believe.

Then they would have progressed from 17 to 49,5% in 118 years, and then to 50% in the two years after.
Not this sudden improvement in two years time. That's the opposite of diminishing return.

Contributor
Don't forget that energy recovery has made it into a new ball game. But then that came in several years ago.

I think a better description is the Hybrid is 50% the ICE is still about 30-35% be wary of unqualified statements, much depends on how you measure efficiency, power out maximum for calorific value burnt? or actual usable power against the input?, or in the case of FI what you can get back having used it all the calorific value to travel a distance you grab some back in extreme braking? Needs a bit of work to be practical other than on a track.

Supporter
Interesting stuff in the Monaco issue of GP+

Bit of insight into where Mercedes (may) have made massive gains in the combustion department. 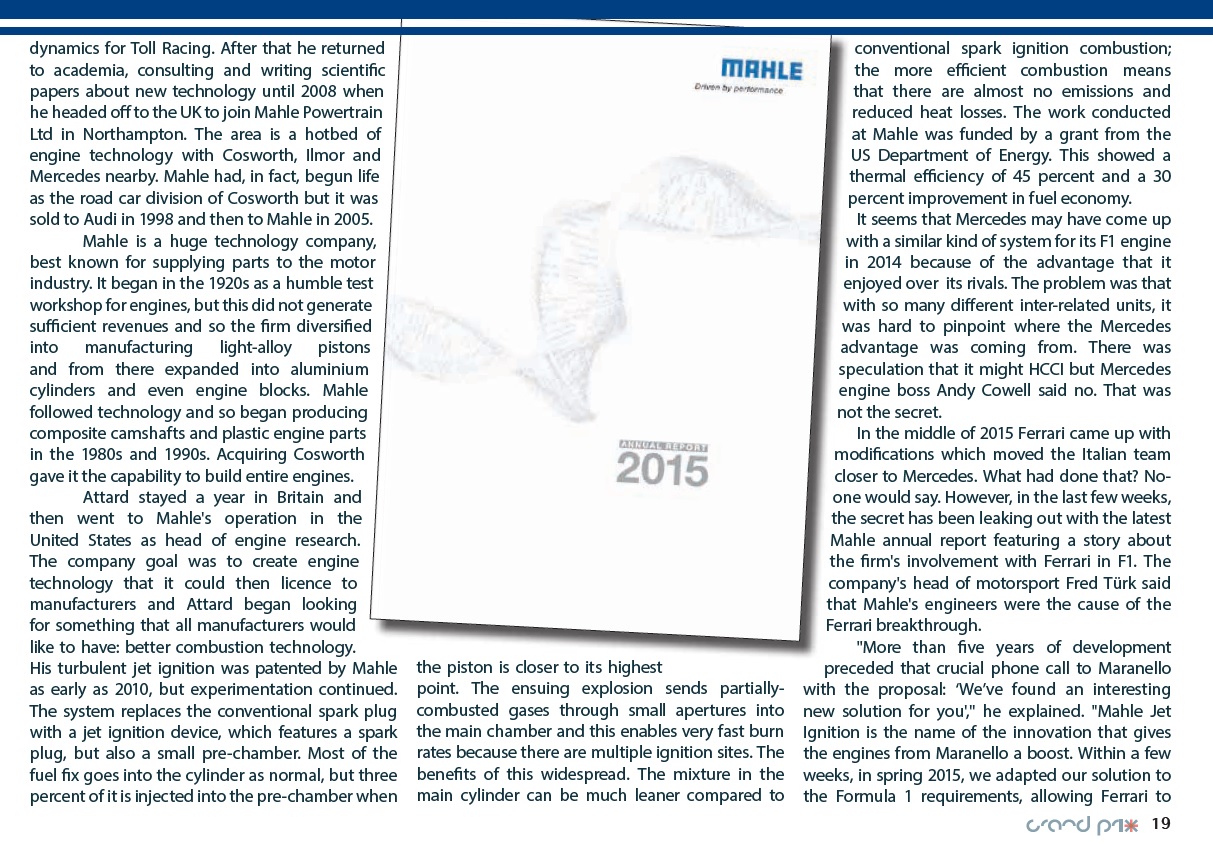 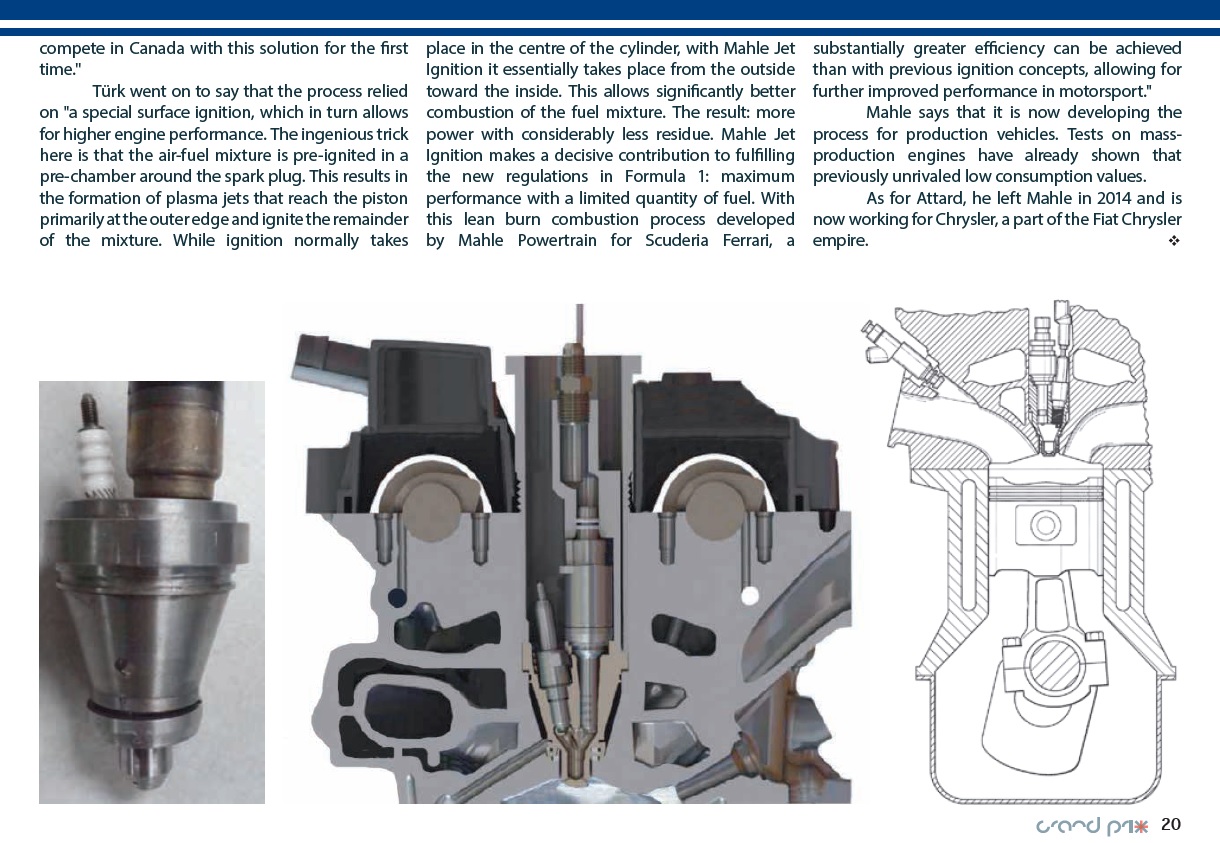 Valued Member
No here's a thing. Honda had something similar to this in the 70's.

Contributor
Following on from my post in the Toro Rosso thread Hartley has used up all his engines for this season; maybe Honda have still work to work to do on reliability.

Hartley to start from back in France

It would be interesting to know how many engines Ghasly has used.