Contributor
We have a thread to talk about the launches of the cars but I think we should have a separate place to discuss the engines themselves, which I'm sure will be one of the key talking points throughout the year. Moving from the naturally aspirated 2.4 litre V8s to 1.6 litre V6 turbos with various energy recovery systems bolted on is the biggest change F1 has seen for decades in fact.

Here is a good video that explains the changes and how the engines work:

Some bullet points to try to explain everything briefly:

Efficiency: Fuel flow limit of 100kg/hour and no more than 100kg to be used in the race. Direct fuel injection is also introduced. Overall the engines will be roughly 30% more efficient than the V8s were.

ERS-H/MGU-H: When decelerating, power generated from the spinning turbo can be used to charge the batteries. The motor used to do this can also be used to spin up the turbo using the power from the batteries (in this case the power could also have been derived from ERS-K). In this way turbo lag can be largely eradicated.

ERS-K/MGU-K: What we knew as KERS before - when decelerating/braking for a corner the residual power of the engine is used to drive a generator that charges the batteries. The generator can later be used as a motor to drive the engine from the batteries, with ERS-K providing around an extra 160bhp in 2014 for 33 seconds per lap (80bhp for 6.7s per lap in 2013 with the V8s). ERS-K will now be deployed automatically via the engine maps rather than the drivers having to press a button, so in this sense it is no longer an overtaking aid.

Manufacturers: Mercedes, Ferrari and Renault are the only manufacturers supplying engines in 2014. Honda will return in 2015 to supply McLaren (and presumably others). It has also emerged that Cosworth have developed an engine so it can make a return to Formula 1 at some point (http://www.racecar-engineering.com/news/cosworth-reveals-2014-f1-power-unit/). The engine manufacturers will supply the following teams in 2014:
Pictures and videos with the sounds of the new engines have already emerged. Here are a few examples: 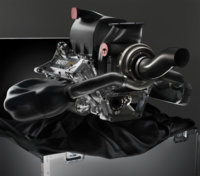 I'm sure we'll have much to talk about in the next week with us getting to hear the engines in anger properly for the first time... and I wouldn't be surprised if there's a few fires as well...
Last edited: 27 January 2014

Contributor
In response to my own thread, I have a question/observation. Here is a video with some nice clips of the sound of GP2 cars (which have V8s):


Also, here are the Barcelona qualifying times for F1 and GP2 from 2013:

It's predicted that the 2014 F1 cars will be about 5s per lap slower and adding that on to the 2013 times gives 1m25.718 for pole and 1m30.070 for 22nd place. The GP2 pole time would be good enough for 19th place on the F1 grid if you add five seconds on to all the times - faster than the Marussias and Caterhams but a few tenths behind Williams.

Here is my question then: Could we have a situation this year where GP2 is more like F1 than F1? They still have V8s so could sound more like F1 2013 and could well be running at a similar pace to F1 2014 (unless I have missed some regulation that will slow down GP2).
Last edited: 25 January 2014

I can say that I am not impressed at all by the sound of the V6 engine.
And that's pretty frighting sight, cause things aren't gonna improve for the future when F1 ultimately
goes from combustion engines to electric.

Contributor
Toro Rosso have released a video with the sound of their Renault engine from the shakedown they did yesterday:

I think they sound pretty good but in the way that many other race series sound good. I'm not sure it will hit you so hard at the track side - the sound of the V12/V10/V8 screams was unique to F1 and amazing to experience. It's still too early to really say though of course.

Premium Contributor
We ..well, I, have no access to GP2, but I have to say that in the coming season I would love to be able to make a comparison of the F1 and F2 engines side by side.

What about a race. That would be good.

Nice to see all that in one thread sushifiesta . Theres quite a lot of comment on the power units splattered in "Technical" threads. Some relevant meaty posts on this subject that might be of interest to folks new to the forum can be found here:

TBH I've posted the links to save me from covering old ground but also to draw attention to Blog Zbod 's quite exhaustive considerations with regard to the performance and technicalities of the units. I've not included links to posts you've made already, sushifiesta , as you've brought most of it together in your OP.

sushifiesta said:
ERS-K: What we knew as KERS before - when decelerating/braking for a corner the residual power of the engine is used to drive a generator that charges the batteries. The generator can later be used as a motor to drive the engine from the batteries, with ERS-K providing around an extra 160bhp in 2014 for 33 seconds per lap (80bhp for 6.7s per lap in 2013 with the V8s). ERS-K will now be deployed automatically via the engine maps rather than the drivers having to press a button, so in this sense it is no longer an overtaking aid.
Click to expand

I'm not sure that's a good thing.

Premium Contributor
Is it just me or does that Torro Rosso engine sound like a powerful motor bike.

Contributor
There is an argument developing regarding this line in the technical regulations:

Measures must be taken to ensure that in the event of failure of the turbine wheel any resulting significant debris is contained within the car.
Click to expand

Mercedes and Renault have taken this to mean that they must cover their turbos for safety reasons in the event of a failure, with the covers weighing several kilogrammes. Ferrari on the other hand have not covered their turbo, but may still comply with the regulations presuming the teams they supply have been told that they must provide some sort of safety structure. This then leaves the teams free to develop that structure to make it lighter or give an aerodynamic benefit throughout the season, whereas if the cover is part of the power unit it can't be changed once the engines are homologated.

We have our first engine controversy of 2014. There is nothing from the horse's mouth yet but it's been reported here for example: http://somersf1.blogspot.co.uk/2014/01/turbo-cover-it-or-not.html

Titch said:
Is it just me or does that Torro Rosso engine sound like a powerful motor bike.
Click to expand

Indeed, but still much better than this:

Contributor
Slyboogy I think KERS worked quite well as an overtaking aid as well, it's implementation was certainly a hell of a lot better than the DRS rules. There will be much more scope for the drivers to "turn the engine up" and use more power in order to try to make/defend an overtake though as they will be running at much less than peak performance during the races to be able to make it to the end within the fuel restrictions. So it will change from "push button to pass" to "change engine settings to pass".

Managing fuel has the potential to be one of the most frustrating aspects of 2014 though having said that, it was bad enough with drivers being told not to get in to long on track battles in 2013 in order to save tyres.

Isn't it because 6sec. of KERS you can use strategically on track, whereas with the 30sec. of ERS they will just have to push the button all the way on every straight there is, except for monza and spa. So there is no need for a button.

Contributor
It will be used in a completely different way Bushi , the power harvested from ERS-K will now probably be used mostly to spin up the turbo when accelerating out of corners so the power provided by the turbo is available instantly and not only after the engine revs build up. It may then continue to be used in spurts after gear changes like you currently see with KERS (when not being used for overtakes) but I doubt it will ever all be used in one lump on a straight. It probably won't even be possible to do that as it will all be handled by engine maps.

EDIT: In other news the (Renault powered) Toro Rosso also has very skinny sidepods. I'm worried that, despite the reports of them having the most powerful engine, Mercedes engine runs hotter than the others thus compromising the aerodynamics for those teams.

EDIT 2: I'm not sure I understand or believe anything I've just written about ERS-K.

30 odd seconds is a significant part of the lap so maybe it will be deployed for a decent fraction of the straights. Hopefully we'll get graphics in the onboard shots that show what on Earth is going on with the engines.
Last edited: 27 January 2014

Contributor
What makes me laugh is that the w12 engine in the Napier-Railton of the 30s has almost 2 litres displacement PER CYLINDER. Makes today's iron look rather puny.

Contributor
After a second glance at the Toro Rosso (with some help from a Scarbs video) the Toro Rosso sidepods are not as small as they first looked and they also have a large air intake for the engine underneath the roll hoop. So maybe it's just Ferrari that have found something with the cooling...

Contributor
The Mercedes (and Red Bull) sidepods look reassuringly small though, so I guess we're seeing that the top teams have put some money in to cooling.

Contributor
We just need a bit more popping noise when the fuel burns off and then we have the classic rally car sound.

Contributor
A lot of 'feathering' and no real power - going to be a funny old season.
S