The Not At Monaco Quiz

1. In which year did Jim Clark miss Monaco to win the Indy500?


19th position
3. Before Juan Pablo Montoya in 2003, who was the previous Williams driver to win at Monaco? 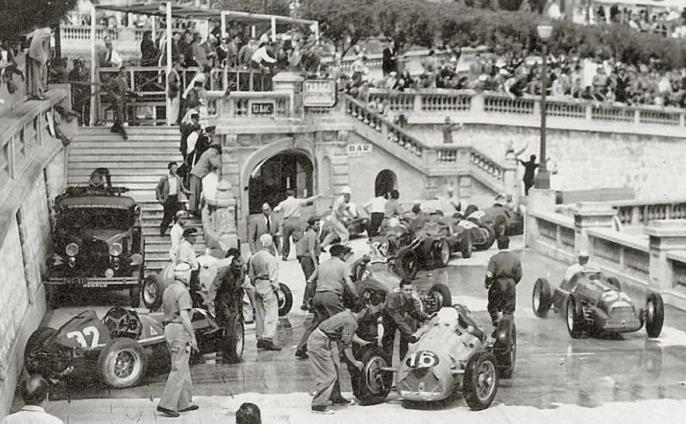 What did this mess allow Juan Manuel Fangio to be the first man ever to do?


The first man to achieve a Grand Chelem
Pole, Win, Fastest Lap and lead every lap. That's him in car #34
5. Which two future Ferrari drivers were out on lap one of the 1996 Monaco Grand Prix to join Michael Schumacher?


Barrichello and Fisichella
6. What was Nelson Piquet's best result in Monaco?


Didier Pironi in 4th. The only man to complete exactly 75 laps!
8. Jarno Trulli, Olivier Panis, Riccardo Patrese, Ludovicio Scarfiotti, Maurice Trintignant. Which of these is not a Monaco winner?


Scarfiotti, who won his only GP at Monza
9. How many points did Toyota pick up at Monaco?


8
10. Who were the last team to take up both spaces on the back row in Monaco?


Ferrari, through Massa [crashed] and Schumacher [demoted] in 2006. They're also the last team to qualify last in Monaco through Alonso last year!

Contributor
3.5 points. With Q4 - Monaco was kicked off the calendar for a few years after the wave took out half the field

Isn't Toyota the latest who qualified on the last row in 2009 with Trulli and Glock?

Isn't Toyota the latest who qualified on the last row in 2009 with Trulli and Glock?
Click to expand

Normally I'd be jumping up & down at the prospect of a MASSIVE 3 points, yet I feel strangely deflated at not have a .5 in my score...

Oh yes, I see. Sorry for the misunderstanding, and it seems I didn't remember this detail.

Valued Member
4 1/2 for me with some educated guesses.

Contributor
4 for me.
The fascinating thing is that Clark went on to become 1965 WDC without having competed at Monaco. Such was the measure of his dominance and greatness.

siffert_fan said:
4 for me.
The fascinating thing is that Clark went on to become 1965 WDC without having competed at Monaco. Such was the measure of his dominance and greatness.
Click to expand