The unique design of the wing makes use of an additional air intake above the driver's head, with the air then being directed to inside the rear wing and exiting through a "blown slot"; the dark line on the image to the right.
This apparently makes the rear wing more effective resulting in an additional 10 kph straight line speed.

BMW Sauber used a similar concept last year although it's unclear whether they were investigated or even reported for this.

Red Bull's Christian Horner had this to say: "There's a bit of a fuss over McLaren's rear wing. They have a slot on it [that affects the air flow] and they can pick up a lot of straight-line speed. I think it will get resolved before the first race. We've asked the FIA for clarification although I think Ferrari are probably more excited than we are to be honest.

Basically, if you stall the wing you take all the drag off it and pick up straight-line speed. It's something that's been done quite a lot over the years but with the wing separators you're not supposed to do that.

Our question ultimately will be: 'Is it clever design or is it in breach of the regulations'? They must be very confident that it's legal. I would think it will be legal."

Hopefully it will be legal.
The last thing we need is another controversy at the start of the season.

Staff Member
Premium Contributor
Anyone remember a time when technical inovation was applauded not reported to the FIA like a bunch of 12 year old school kids going "Sir, Sir, It's not fair........"

I think the most frightening bit about this is that BMW were using this concept last season and still the car drove like a brick! Have BMW Sauber retained the feature? If not, why not!?

Does this also explain why McLaren have changed tack on the use of the "shark fin"? They were always very dismissive of it in the past.

It's probably a case of one team having the idea and another team actually amking it work, like the ferarri semi-automatic gearbox and Lotus adapative suspension (iirc)

Almost all the innovative ideas are run by Charlie Whiting during the design phase, as was the case with the DDD. Surely Ferrari are also just appealing for a clarification of the rules?

It reveals a little about how confident Ferrari are feeling ahead of Bahrain.

Let's try to put some flesh on this bone: 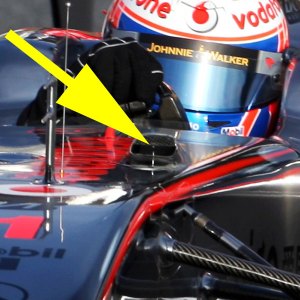 Scarbs said:
One rumour around the internet suggests the inlet is linked by a duct to the shark fin\blown rear wing. At first appearing to be simply a wild rumour, that the snorkel is blocked by the drivers knee to alter the rear wing airflow.
Click to expand 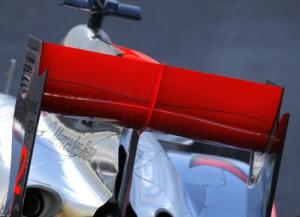 
Scarbs said:
Allied with the shark fin, the inlet appears to provide airflow to inside the rear wing. Creating a ‘blown slot’ to make the rear wing more effective. Similar to a concept used by BMW Sauber last year.

It looks like McLaren have opened up a slot in the back of the rear wing, this is visible as a blackline above the normal slot between the wing and flap. This slot is fed with air from the inlet and routed inside the shark fin and rear wing flap.
Click to expand

Staff Member
Premium Contributor
Here's a pretty good explenation of a Blown Flap from the pages of Wiki.

There has been a lot of discussion on this subject over at http://www.f1technical.net/forum/viewtopic.php?f=12&t=7495&start=1590 over the past few days. It's actually quite alarming that none of the professional commentators or F1 news providers have commented openly on this development and the potential for dispute before now.

Staff Member
Thanks for the links guys, interesting stuff.

Brogan said:
Thanks for the links guys, interesting stuff.
Click to expand

Have you got to the bit about the small unicorn in the airbox, who is fed beans and expels high pressure air at the blown wing?

snowy said:
Have you got to the bit about the small unicorn in the airbox, who is fed beans and expels high pressure air at the blown wing?

Surely they'd have to be magic beans

The devil is in the detail.

I giggled like a little girl when I read "blown slot"

In todays Autosport there is a double page article on all the new and natty devices that McLaren were running on their car in the last two days of testing.
Under the headline: "Hamilton hails McLaren's "one-second" improvement!"
Lot's of highlighted areas of the car and total zip about the "blown slot".

I giggled like a little girl when I read "blown slot"

Shame on you, shame on me for not seeing that one coming!

Staff Member
Whatever happens, I hope the FIA rule on it before the first qualifying session.

The last thing the first race of the season needs is for McLaren to have their qualifying times disqualified for using an "illegal device".
S

Supporter
I get the feeling it will blow over and amount to nothing.

I've had a scan through and I can't find anything to say it's illegal.

Valued Member
Presumably if the scrutineers in Bahrain allow it and then later it is banned (as Ferrari haven't got one) any points and positions would be retained - like the Ferrrari double floor or the the Renault mass damper? Or am I being naive given that it is Mclaren who have this new widget.