Contributor
I've been waiting on Rogue One since it was announced about a year and a half back. A heist story set in the time of the galactic empire with no Skywalker/Jedi links? Sounds pretty fresh and awesome to me.

Trailer makes me think more so.

Contributor
Are they doing other spin offs? A bounty hunter film would be good with Bobba Fett and Greedo. As would a 'Rise of Jabba The Hut' film.

Greenlantern101 said:
A 'Rise of Jabba The Hut' film.
Click to expand

I've been working on that for years.
C

Valued Member
The rise of Jabba has been very much covered in the Clone Wars cartoons, just not with any great in depth detail. Not sure that story really requires any more put into it as will turn into ScarFace the Empire years

I am looking forward to this years film as it can't be a rehash of the same story (Episode 7 was a complete rehash of Episode 4 just made bigger by using a planet).

Contributor
A bit of googling reveals they have a 'young Han Solo' film coming and a Bobba Fett film is possible but unconfirmed.

canis Disney have already said they have decided to ignore everything from the books. I assume this would apply to the cartoons as well.

A Jabba the Hut / scarface / goodfellas film would be great if they made it an 18 certificate.
Last edited: 12 April 2016

Contributor
Both the Clone Wars and Rebels cartoons are considered part of the Disney storyline.

Which is interesting as it means Darth Maul didn't die in Phantom Menace and that both Darth Bane and the Yuzhan Vong (my favourite bad guys) are part of the Star Wars universe.

No sign of Mara Jade or Admiral Thawn yet though

RasputinLives said:
the Yuzhan Vong (my favourite bad guys) are part of the Star Wars universe.

No sign of Mara Jade or Admiral Thawn yet though

Surely, our favourite bad/good guys? I cannot help but think that the whole Yuuzhan Vong story ended rather weakly all in all, I recall being quite disappointed that after an epic war, it all kind of fizzled out a bit.

The Thrawn Trilogy was something very different though, Timothy Zahn had the balls (and permission!!) to write something mainstream, and started the glut of books (I know there were a lot of comics and other stuff, but I don't think that they had the clout that Zahn did)

Incidentally, did you read the Conqueror trilogy by Timothy Zahn? Another great read, although not Star Wars related!!

Contributor
I haven't read any of Zahn outside of Star Wars but I might look that trilogy up. His follow up to the Thrawn trilogy was pretty good too.

I think the Yuzhan Vong story got closed off quite quickly because the publishers were worried when sales started to drop. I know there were at least 3 books cancelled in the series. The follow up books seem to correct the 'permanent' change they had done to the Star Wars Galaxy too. Certainly Corsaunt suddenly changed back to normal despite the massive change that had been written about. Maybe it took Star Wars a little too out of its comfort zone for fans and writers.

It would still be awesome to see a live action Yuzhan Vong invasion. I doubt they'll go for it though.

Valued Member
RasputinLives the Conqueror trilogy is one of the finest works of Sci Fi that I have read in a long while. Zahn was able to create a universe, complete with Alien cultures, bring it all alive with intrigue and plot twists, without getting so complicated that you lose track. Each book was written from a different perspective, and closed with a satisfying conclusion that felt right.

Highly recommended. I would lend you my copies, but a mate of mine absconded with them!

I think that 3 more books in the new jedi order series would be too many. I think that the stories were already getting a little thin. I think that the main issue was that Chewbacca got killed off, leaving a big hole for any subsequent writer to fill, not to mention all the other planets and stuff that were wiped out completely, I cant remember reading too many books after those, which, in my position as representative of the target audience would be an issue. I think that the book sales suffered as the story got weaker (Peter Jackson take note!!) so it became a self fulfilling prophecy. When the generations moved on, and the likes of Luke, Han, Lando and Leia were not prevalent, you were being asked to imagine a familiar universe with unfamiliar faces, and I struggled with that, so never got to read the Jedi Academy series. They may have been great books, but I felt that they would appeal less to me than they would to a generic Sci Fi audience, as I had become immersed in the familiar universe.

Anyone know when Episode 7 will be available on Virgin Media on demand? I have still not seen it.

Contributor
6 days. It's on countdown on the top of my TVbox.

Don't listen to the naysayers that say it's just a rerun of EP4. It deliberately echoes that in ordering set up the next gen but it has its own soul.

Contributor
It's a dam good film. It's just a shame they hadn't come up with a 'new' threat and went with the massive planet size weapon again. But even so It's right up there with the best film yet. I need to see it again to know if it trumps Empire.

Loved the new Star Wars film at Christmas, it was good as it went back to the traditions from 4 to 6. Action & Music was fantastic & there's nothing better than being in a packed cinema, when that theme tune starts up, goosebumps & remembering all the good things of your childhood.

Can't wait for the next film Rouge One, trailers look epic.

“I find your lack of faith disturbing.”

Contributor
I am trying to get excited about rogue one, honest, but there has been so little pr I'm struggling a little.

That will change over the next few months! 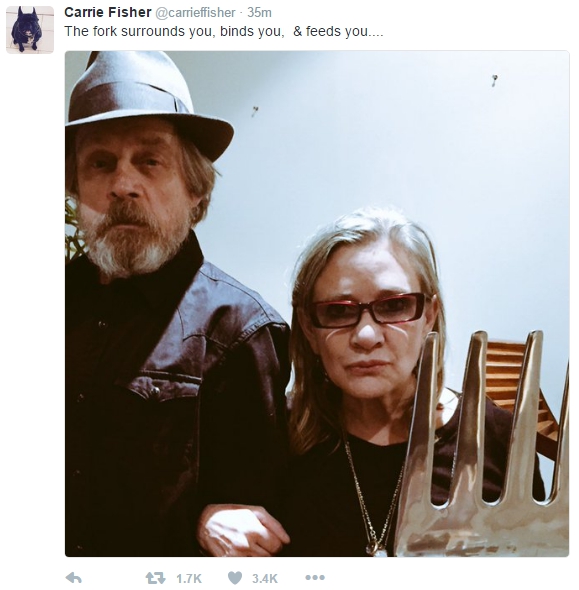 Gotta have this mask


Second trailer was a bit of a downer though:

Are you talking about Carrie Fisher?

that will be auto correct making me look like a plank again. Rogue.

Woop!!! New trailer and finally a good one: