Valued Member
I watched Rogue One the other night, what a load of crap.

Contributor
Well I loved it.

Contributor
I agree with gethinceri there - probably my favourite Star Wars film actually! It confers a sense of urgency to "A New Hope" that was never quite there before.

FB said:
I watched Rogue One the other night, what a load of crap.
Click to expand...

Can't say fairer than that. I thought it was like someone who had heard a second hand account of the Star Wars story, in Korean, decided to make a Star Wars story and threw in a WWII D-Day beach invasion scene for fun. 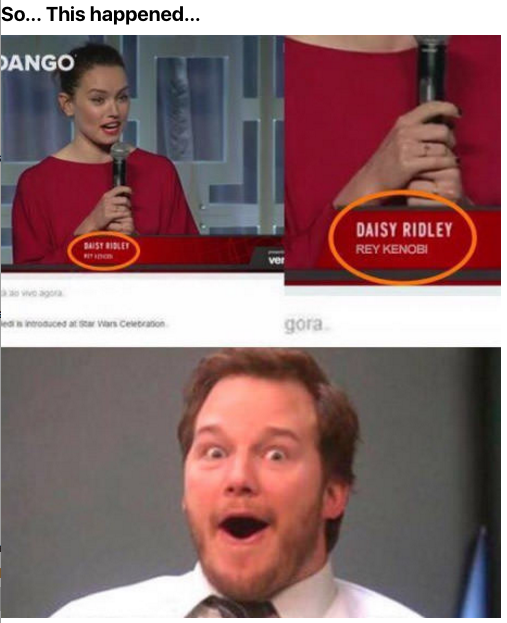 Are you suggesting that Obi Wan was not such a hermit after he retired? After he gave Anakin such a hard time about Padme...

Contributor
jez101 and cider_and_toast I'm about to go all geek here but anyways.

The theory is NOT that she is the daughter of Obi Wan but a descendent (hence his voice in the force vision). Obi Wan did have a love affair pre fall of the empire (see Clone Wars) and this may have resulted in an offspring either known or unknown to Kenobi. This has then resulted in Rey. Luke is obviously aware of who she is.

I Don't believe this picture by the way I think it's prob just Daisy and Josh Gadd goofing off again.

I favour the 'daughter of Han and Leia' theory with Snook or Kylo having erased everyone's memories (apart from Luke of course....and prob Chewie's are R2's....they always know what's going on but never say).
Last edited: Apr 21, 2017

Staff Member
Premium Contributor
I liked it so much more when I didn't have to remember 40 years of back story spread across 9 films. My brain hurts.

Yes, I agree, but it's called the 'skywalker saga' for a reason.

cider_and_toast said:
I liked it so much more when I didn't have to remember 40 years of back story spread across 9 films. My brain hurts.

Don't you have a quarterly Star Wars Weekend?
Weirdo.

Valued Member
In proper movie world, I watched The Wrath of Khan last night for the umpteenth time. What a great film.
Last edited: Apr 22, 2017

Good but no Empire.

Staff Member
Premium Contributor
Empire's good but it lacks a coherent end to it. The Empire don't really win and the rebels are left in limbo.

Luke comes up with a series of convoluted plans to rescue Han when clearly a small force of rebel troops would have had him out of there in 10 minutes flat.