the lack of free to air coverage is a problem like cricket a few yrs ago when man of series & winning the ashes wasn't enough for joe root to even be on the shortlist in 2015, lewis Hamilton success doesn't really matter he won it in 2014, but for some reason the non f1 media, have a vendetta against him & have poisoned his reputation mainly because hes different, the only problem is that only F1 fans who have watched him for 10 years, know yes at times he's a

but on the whole he nothing like his protrayed reputation

but then even then this year was a weird year because yr between summer > Winter Olympics with no murray is always low bar, Joshua was 1/10 fav after beating kiltschko in the biggest heavyweight fight on british soil for 20yrs, & everyone thought he had it sown up, so maybe complency cost him as 18 votes between him & 3rd in Johnnie peacock, Froome failed a drugs test as discussed on tdf thread 4 days before the event, & the power of campaigning helped Johnathon rea come 2nd & Johnie peacock come 3rd

I suspect the tax thing had something to do with it.

Contributor
He was 6th. 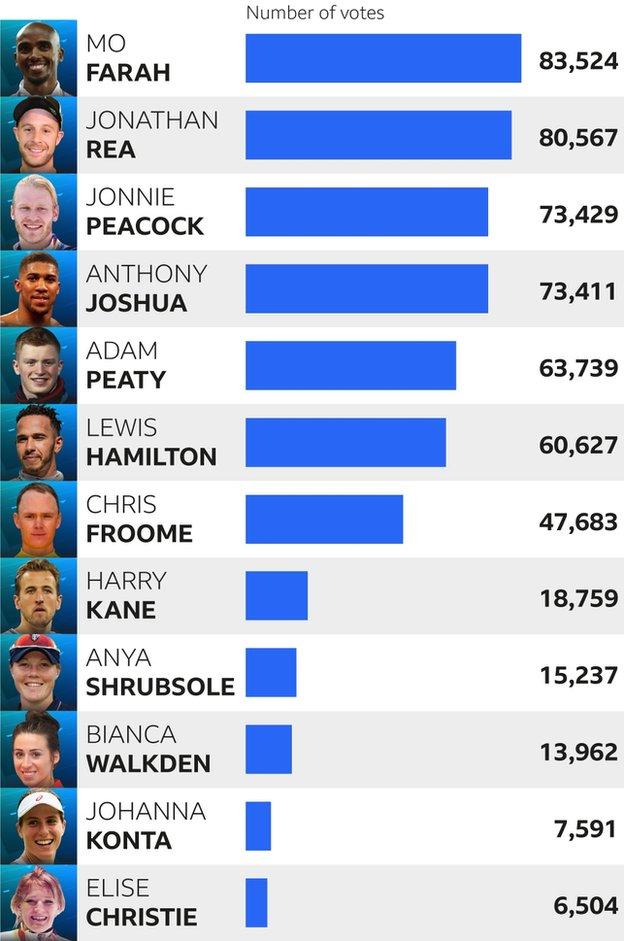 Staff Member
Premium Contributor
I expected both Hamilton and Frome to be farther down the list for obvious reasons.

Hamberg said:
I suspect the tax thing had something to do with it.
Click to expand

Or he's lacking the personality bit of the award?

Porceliamone said:
Or he's lacking the personality bit of the award?
Click to expand

but you say that & maybe your right. but what does that say about f1 when Hamilton is the liveliest person on the current grid. espically compared to his teammate bottas

I'm surprised by how low the voting numbers are. I can't imagine it's getting very good viewing figures.

Someone tweeted to Martin Brundle that it would be injustice if Lewis Hamilton did not win SPOTY for being a 4 times world champion and setting some impressive records this season. Martin 's response was it is up to the viewers to who they vote for

Lewis got 60,000 votes but that was 20,000 less than Jonny Rea which just shows you how much people think of F1 at the moment being too much regulation and car focused

Il_leone said:
Lewis got 60,000 votes but that was 20,000 less than Jonny Rea which just shows you how much people think of F1 at the moment being too much regulation and car focused
Click to expand

Ok..., that's a conclusion I wouldn't have arrived at, because the numbers alone say nothing about F1 or why one was favoured over the other.

Valued Member
Two things:
These two factors may be more relevant than motorcycling>F1.

That’s a massive loss of interest. And let’s face it, there was an enormous amount of purple prose which was cringe making.

Staff Member
Premium Contributor
Since SPOTY moved out of the studio and became a great big arena event it has just highlighted how irrelevant it has become.

By the time they show a film reviewing all of the nominees there's little time for anything else.

Also, these days, the BBC had to make sure every box is ticked and the list is as broad as possible.

Its lost its heart and its sense of fun.

Valued Member
Titch - More watched this year than in 2011. There was a huge Olympic boost for 2012, which is now used to produce disingenuous data.

Staff Member
Premium Contributor
And no team PR rep holding recorders under their noses, shitting bricks that the driver may say something that damages 'the brand'.

I don't disagree with Mo not getting SPOTY but just how far Lewis finished in the voting says a lot .

Chris Froome did not get as many votes probably the drug test failure timing did not help either. Hamilton's tax avoidance scandal not ideal - singled out possibly but all the musicians and entertainers (and sport stars) have people helping them to pay less tax