I suspect you all know the scores for Australia, so here it is over a lovely picture of the Melbourne skyline: 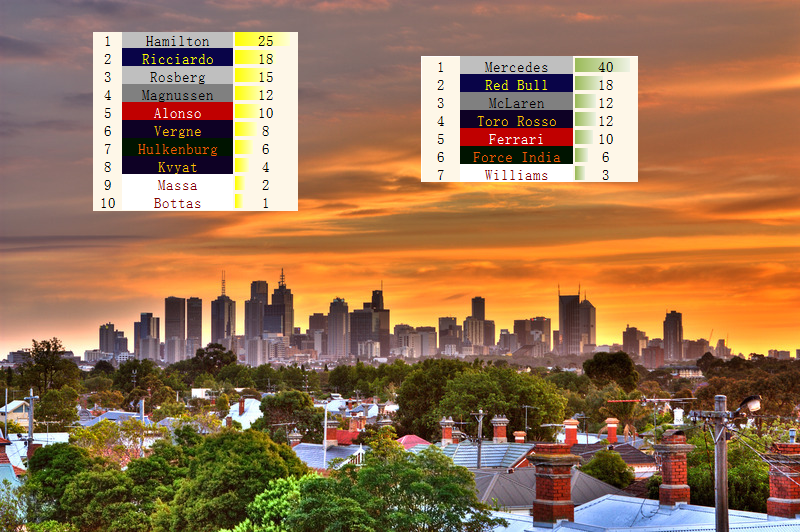 Mercedes already have a 22 point lead in the Qualifying Constructors Championship, so good luck to the others. 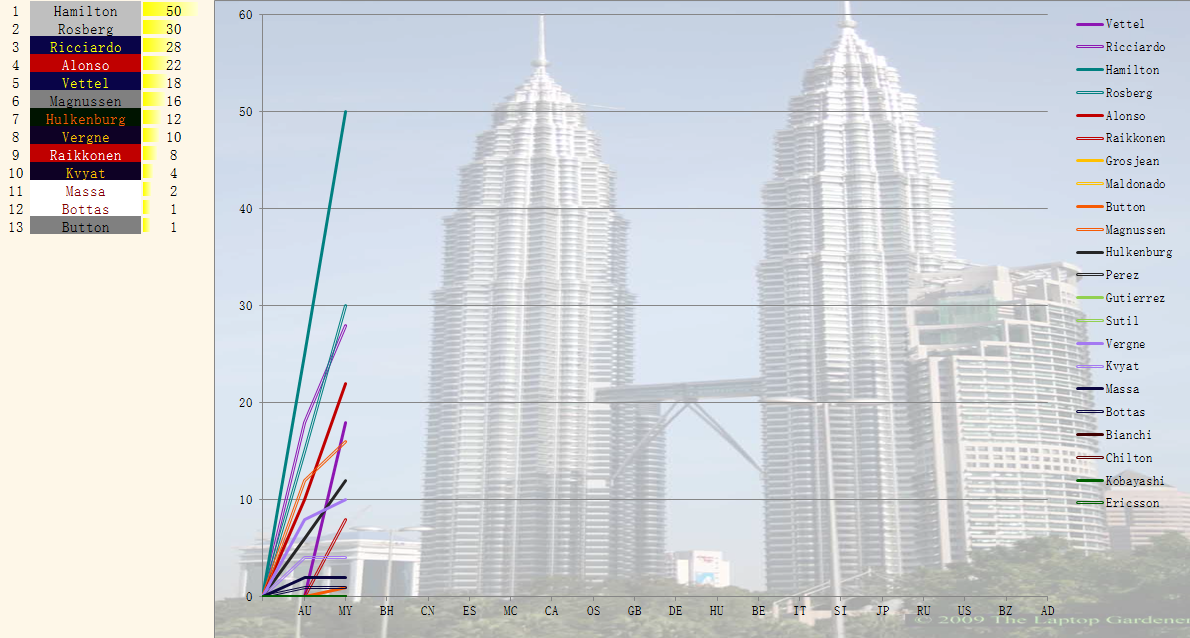 So the title of frickin' awesomest driver in the first two qualifiers of 2014 goes to Lewis Hamilton. Rosberg jumps Ricciardo into third position, while excellent progress is made by Fernando Alonso, Jean-Eric Vergne and Nico Hulkenburg. And some chap named Seb Vettel goes straight in at number 5. 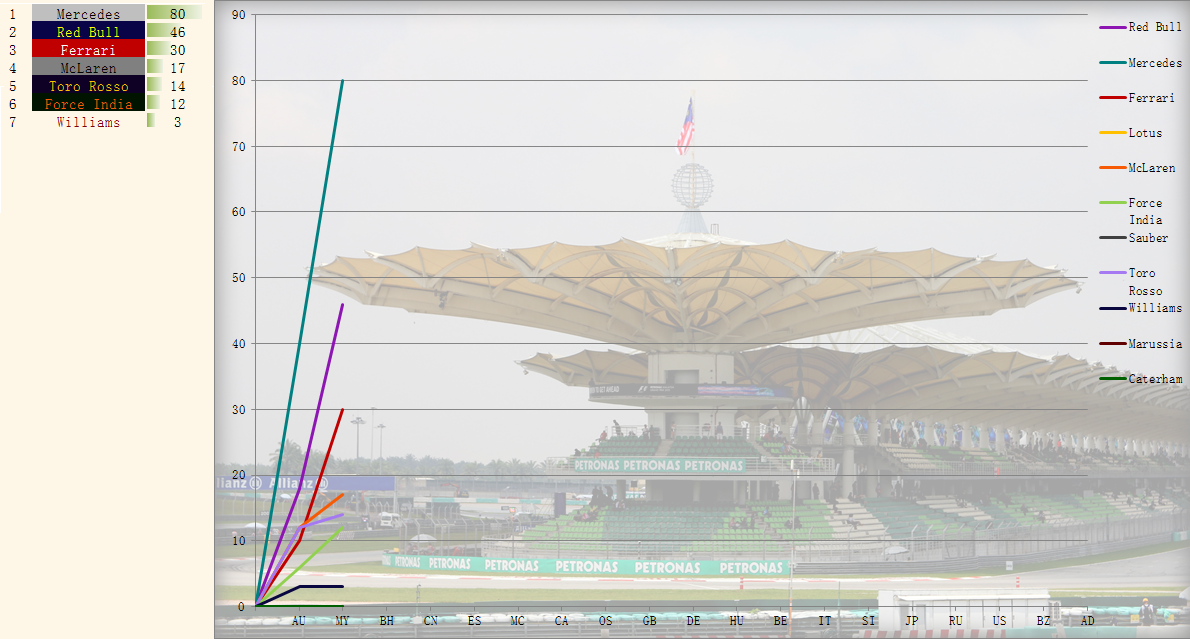 Mercedes are on 80 points, which is obviously a long way ahead of their closest challengers, who are Red Bull. Scuderia Ferrari are in 3rd with McLaren 4th; so much for the new world order. It is Toro Rosso that lead the rest; Williams are looking pretty sick on this one. Will it all change when it gets all dry?

Valued Member
So a dry qualifying session, and a different result: 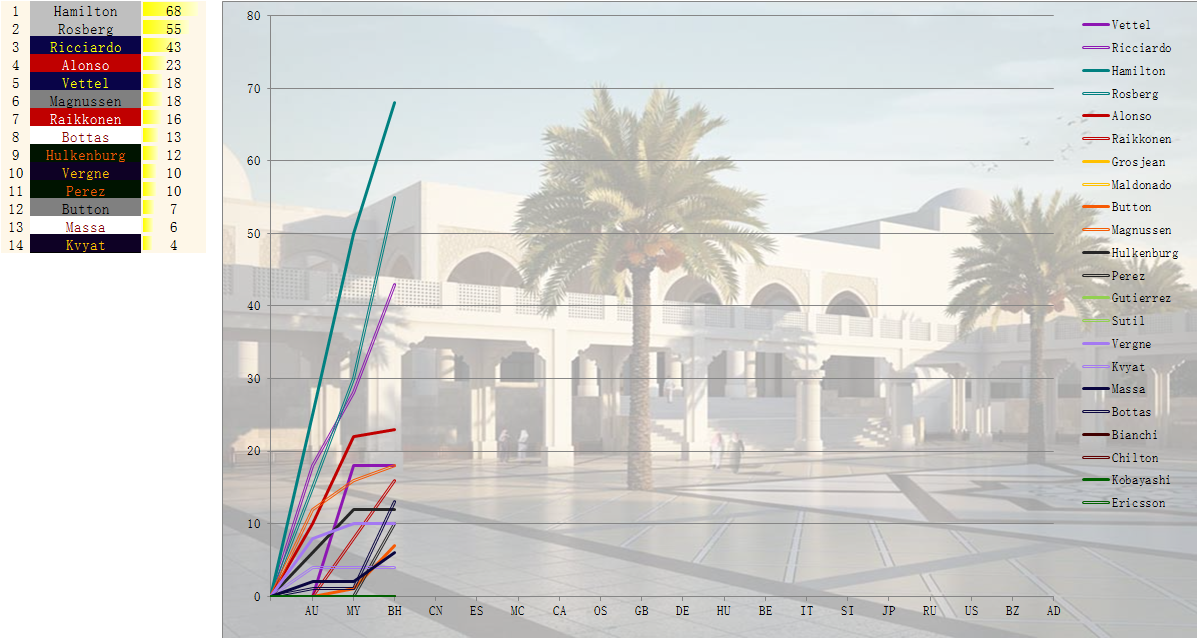 The first dry session, the first Mercedes one-two and the first Rosberg pole. The top three of Hamilton, Rosberg and Ricciardo pull quickly away from the rest, still lead despite disappointing efforts this week by Alonso, Magnussen and Vettel. Hulkenburg's non-score sees Raikkonen and Bottas jump him. Perez is the only new face amongst the 14 scorers in the chart. 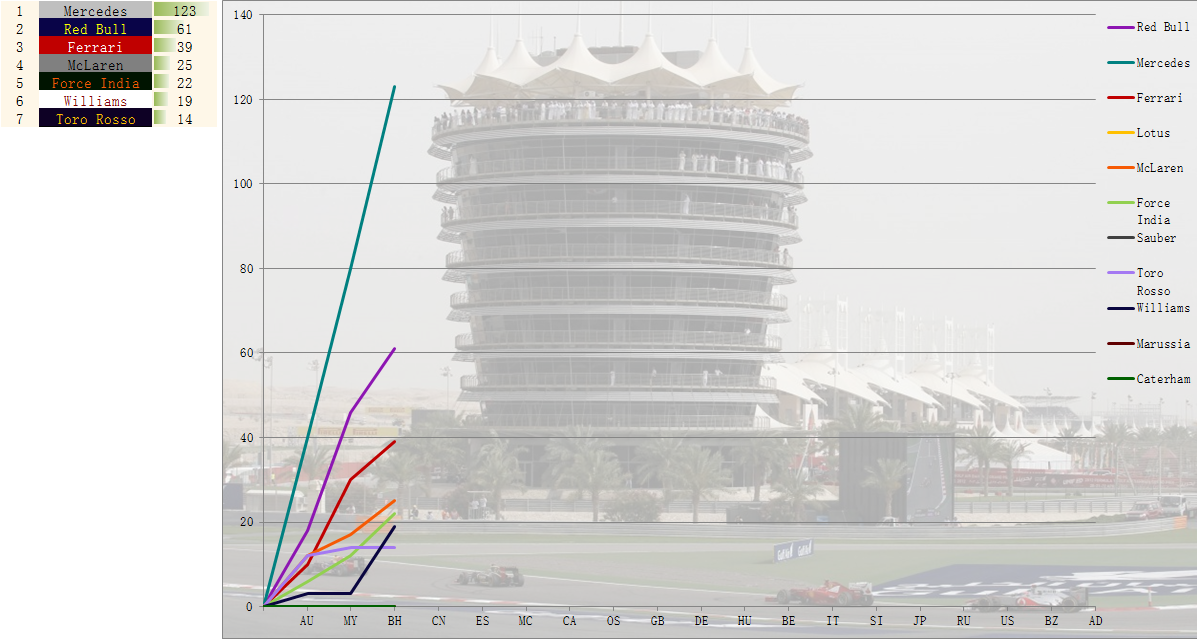 No such questions here, though. Mercedes already have more than double the points of the Red Bulls in second place. Force India have somewhat caught McLaren, and it is they and Williams who look most ominous with dry sessions presumably abundant from here on. 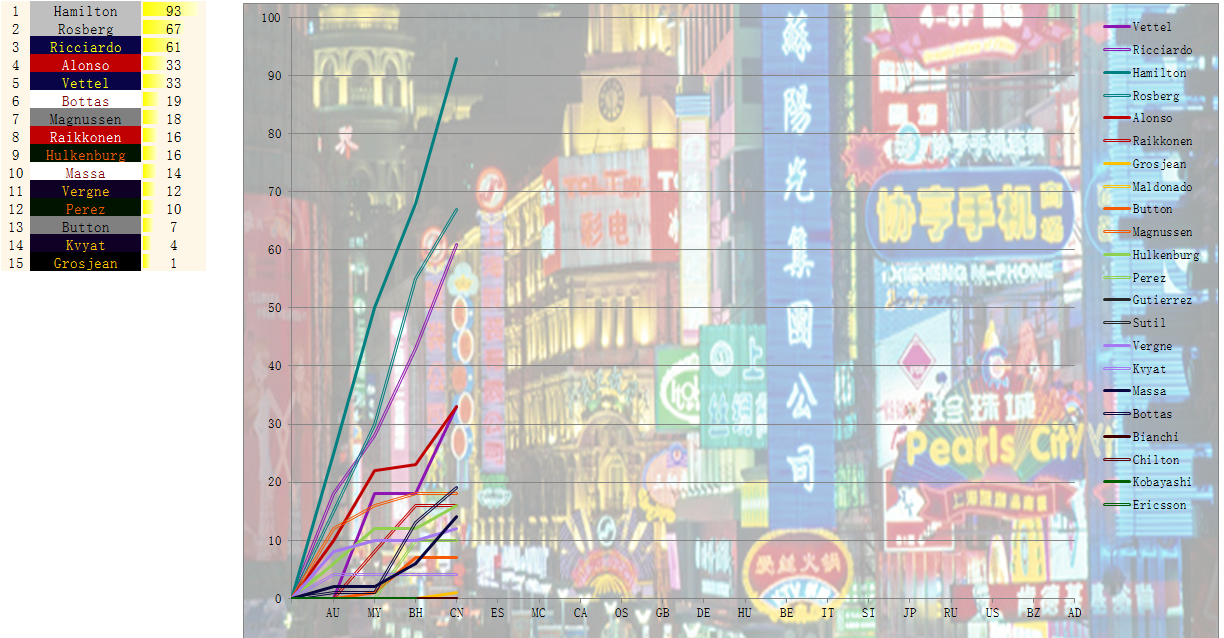 Ricciardo pulls close to Rosberg, while Vettel catches Alonso. The field is then somewhat congested, with Bottas leads a big pack, with Massa now joining ahead of Vergne and Perez. Grosjean is on the board. 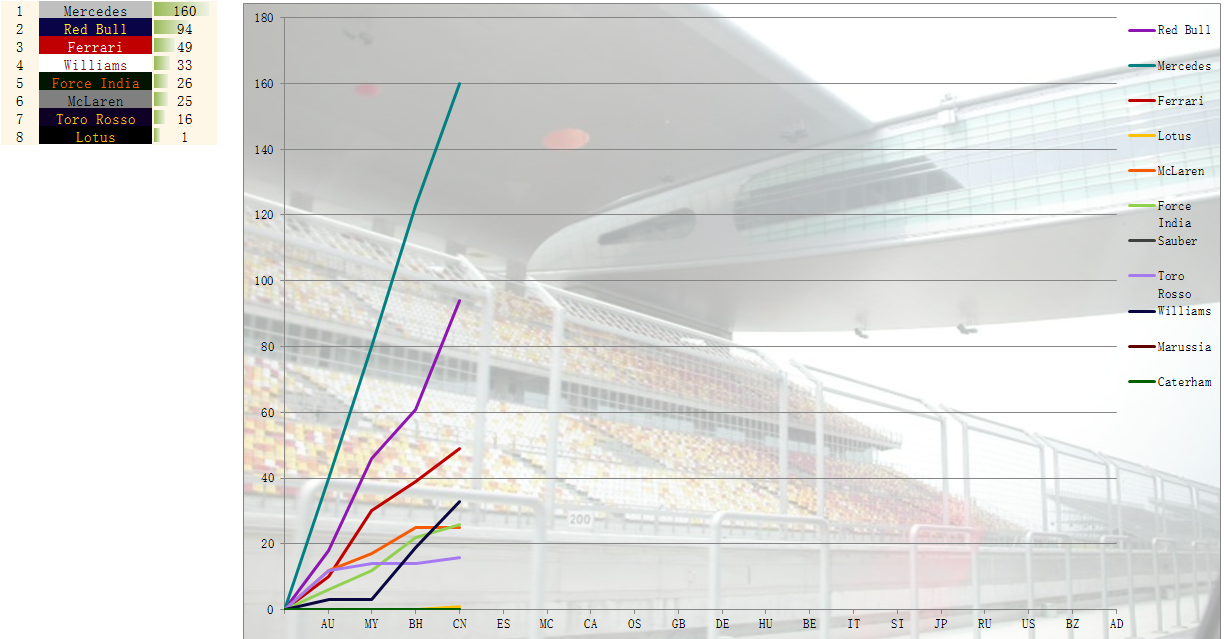 Red Bull's excellent performance serves only to dull Mercedes escape velocity, with Williams leaping into 4th ahead of Force India and McLaren. Lotus' point means they join the party before Sauber, which few would have expected back at Melbourne.

Contributor
An interesting observation I read elsewhere - were it not for Hamilton, Red Bull would have had 3 out of 4 poles so far this season. Incredible considering where they were after pre-season.
Last edited: 19 April 2014

Valued Member
All three in the wet though. So evidence that the downforce is OK. 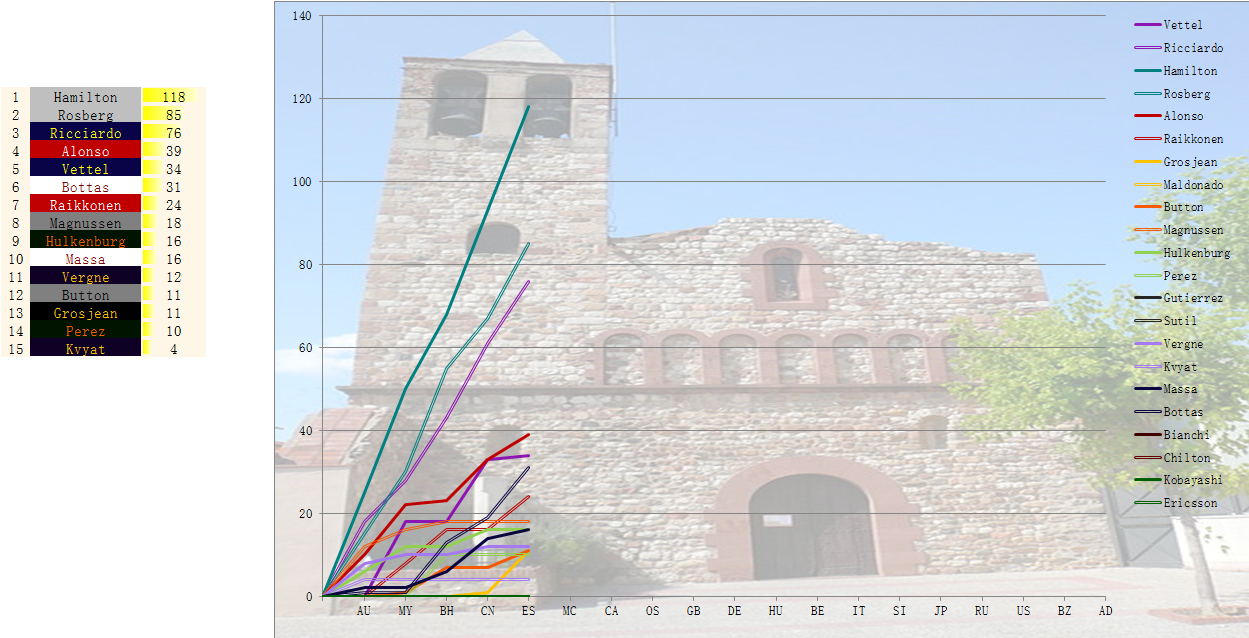 The Mercedes (and Ricciardo - chapeau, mate) are bombing away from the field, with Hamilton on a ludicrous 118/125 points so far. Alonso moves into 4th after an odd-numbered race Vettel qualamity that seems to be the story of 2014. Bottas is into the top 6, and Grosjean overhauls Perez! 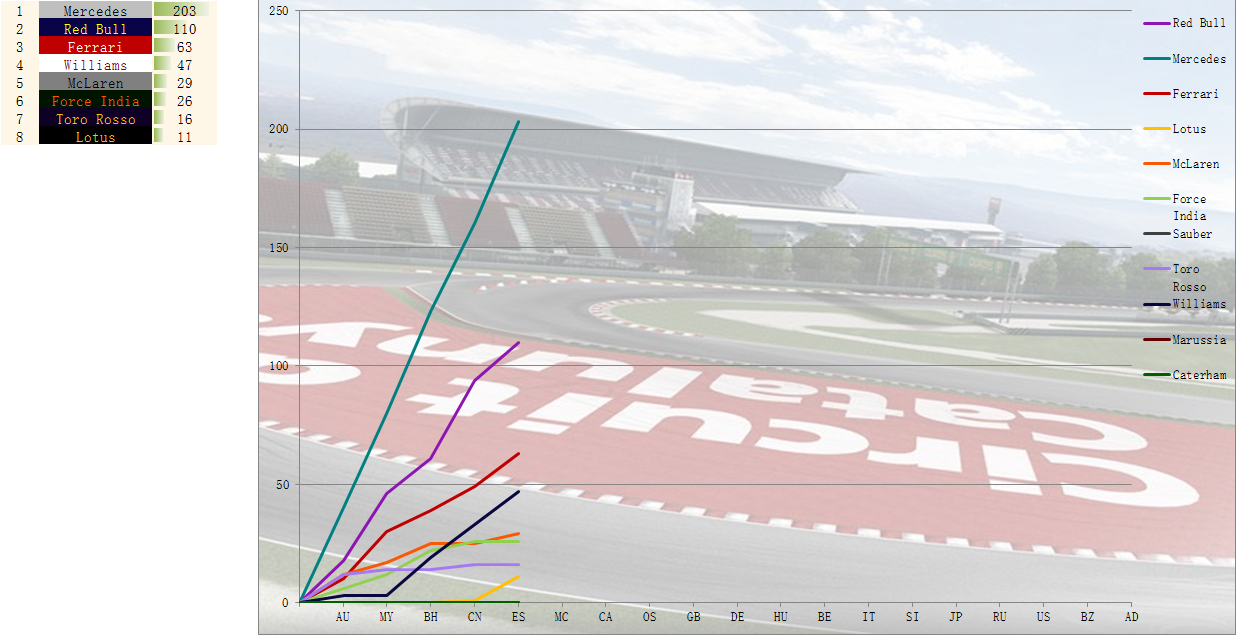 That Mercdes line is not getting any closer to the pack. Red Bull are also in a lot of space, but a good Saturday for Williams and McLaren, who pass a stagnant Force India. Lotus emerge from the ashes and are now putting Toro Rosso under proper pressure.

Valued Member
Shit, I've got to find myself a Monaco landmark that's not actually on the track for the background for the next race. Didn't think this through!

Valued Member
Not 100% sure that's keeping with the spirit

Valued Member
sushifiesta - Think it will be the inside of the casino, rather than the Stade Parc de Voitures II.

Contributor
Well now you know that bikinis and football occupy my thoughts more than gambling...

Valued Member
I think other football stadiums might well be in with a chance, just not that one...

sushifiesta said:
Well now you know that bikinis and football occupy my thoughts more than gambling...
Click to expand

Valued Member
Well, thank God that wasn't in any way controversial. That'd be too much for the heart to take, I think. 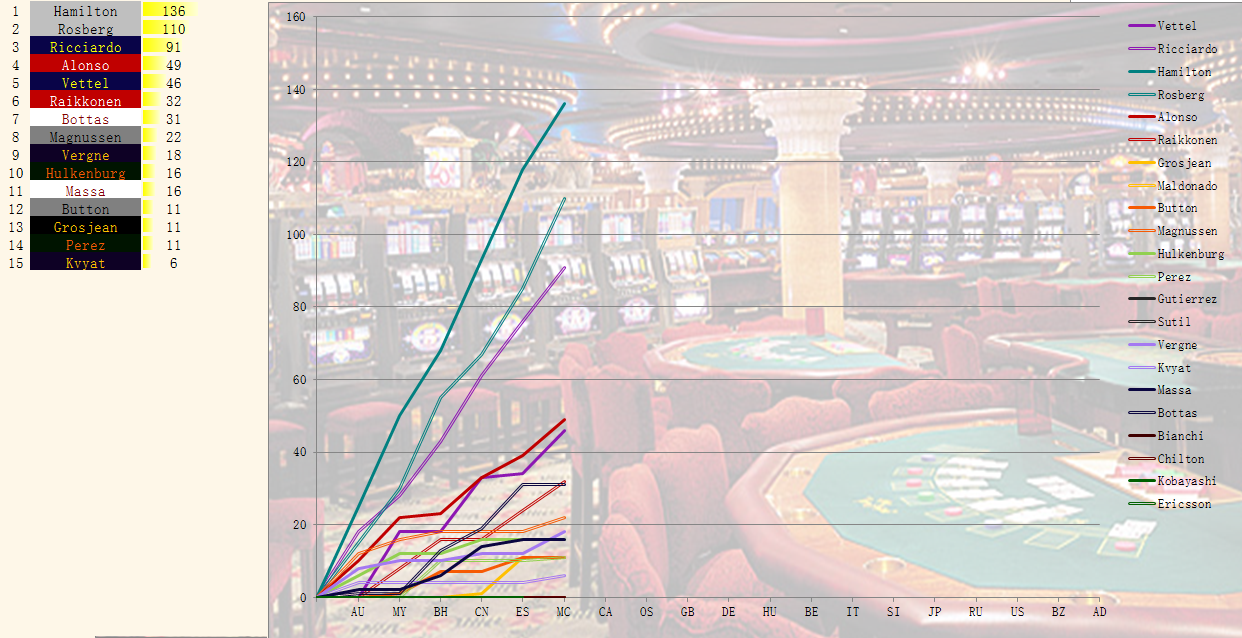 Rosberg narrowly closes the gap to Hamilton; the top three are miles clear of everyone else, hats off to Danny Ricciardo. Raikkonen moves past Bottas while the Vettel/Alonso battle starts to get close again... 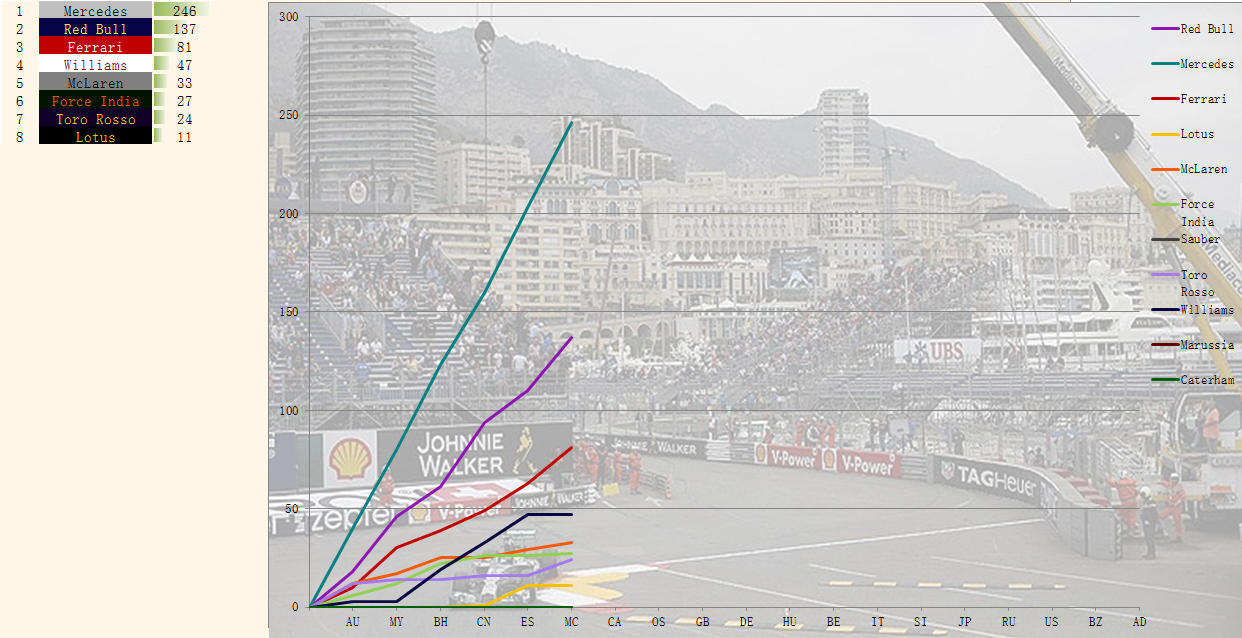 Really, a quite phenominal weekend for Toro Rosso pulling closer to McLaren and Force India. Unfortunately, nothing else seems likely to change for a long time

Valued Member
It all just got real: 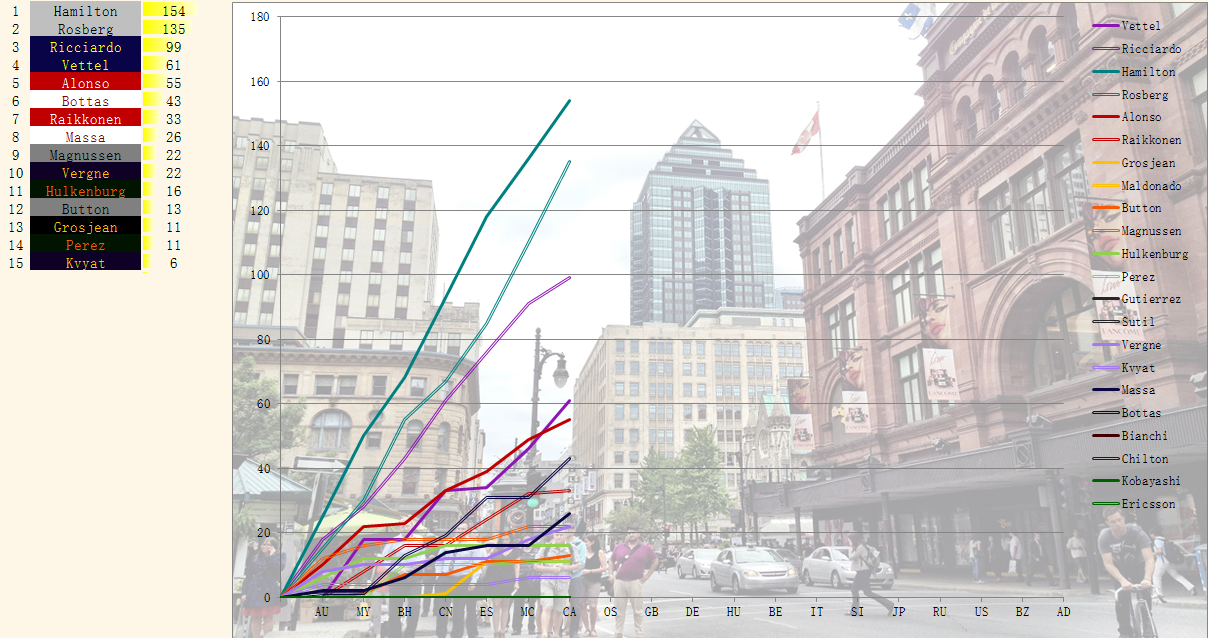 Rosberg continues to close the gap to Hamilton, while Vettel's excellent result pulls him clear of Alonso. Bottas pulls a big result in the Finnish squabble. More consistent pointscoring from Jev pulls him level with Kev in 9th place. 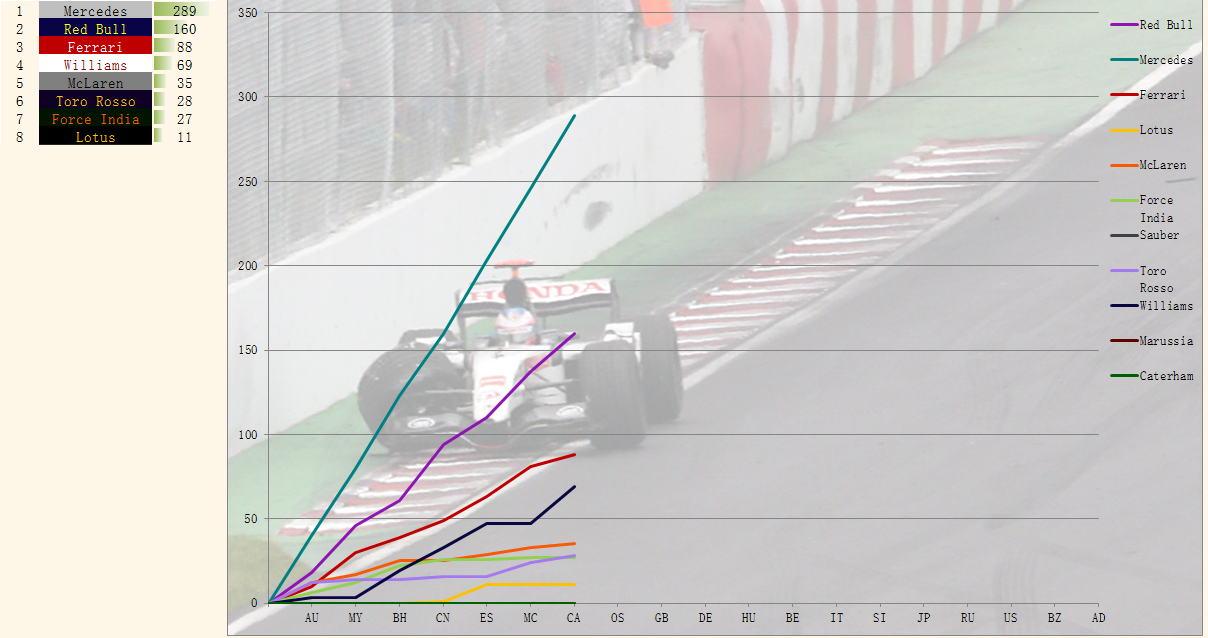 Mercedes lead gets more ludicrously good, with Williams closing the gap on Ferrari. Toro Rosso pass Force India for 6th, and are close to McLaren in what is, frankly, the only battle on the board.

Valued Member
Internet is slightly less than perfect at the moment, so Galahad might be slightly disappointed. 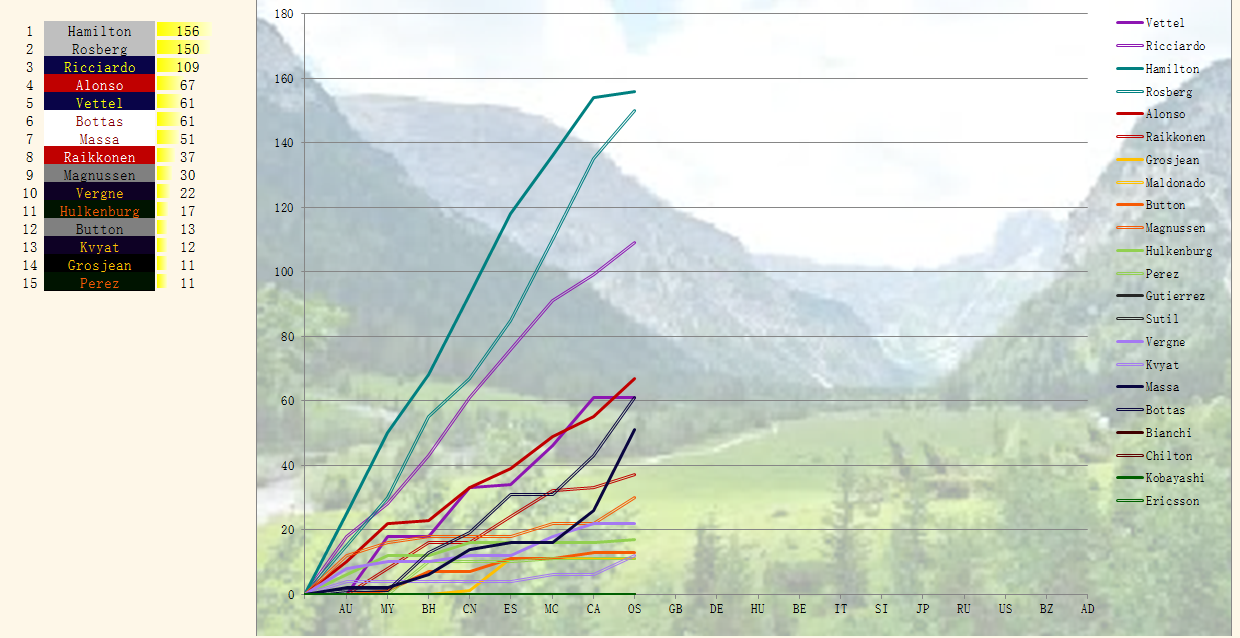 So, as in the WDC, a non-win here with a Hamilton failure is fantastic news for Rosberg who takes a huge chunk of his team-mate's lead. Vettel is passed again by Alonso as Bottas wipes out his 18 point gap. Massa also leaves Raikkonen in the dust, which I think he'd like. Magnussen has another good week, and Kvyat has not done badly either... 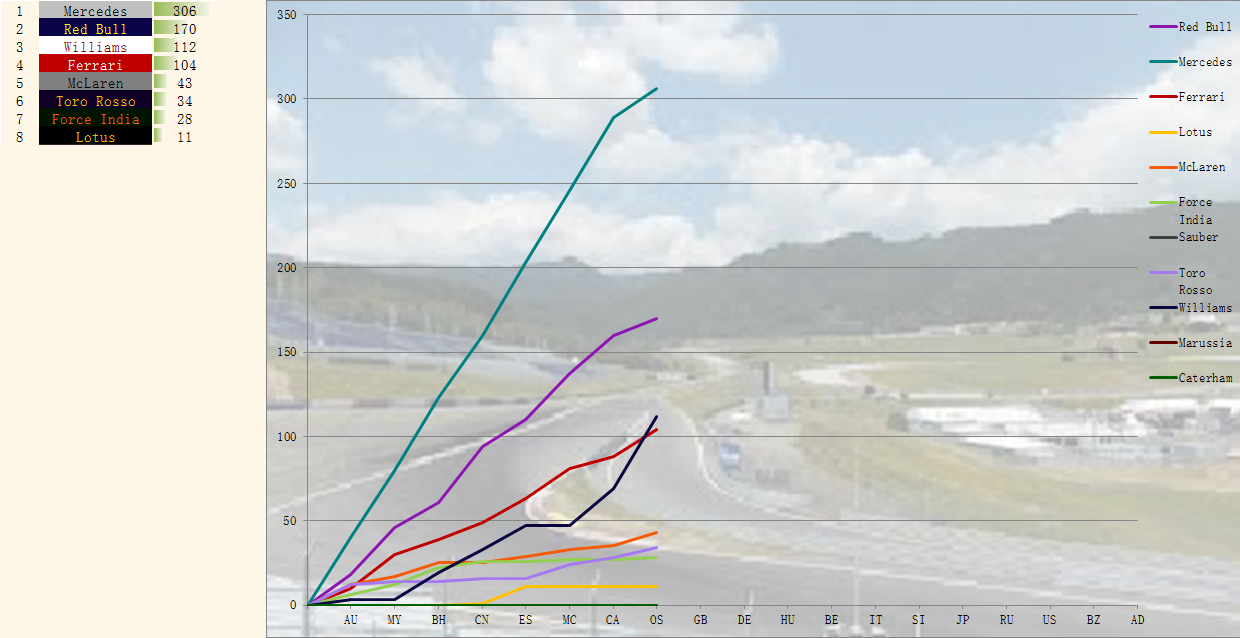 A pretty good week for Williams, unsurprisingly. Having said nothing was going to change, Williams have now proved my calculations erroneous as they have passed Ferrari. The McLaren-STR-Force India battle solidified in that order.

And Mercedes' qualifying has just been Schlessered as well!

Grand Prix 2021 The "OMG It's the Brazilian Grand Prix this weekend, and we haven't got a Practice, Qualifying & Race Discussion Thread"
10 11