Contributor
Theres been a big crash, a car thrown over the armco. Might have happened earlier, I am lost with this commentary.

Also an alsatian in the pits.

Contributor
Don't really know what is happening, but its great watching the car going round the ring

Contributor
Tidy, thanks for the link. Safety car out?

Contributor
No, there was a blue flashing light at the pit exit! Dolt.

Contributor
Ha! it was the safety car. What a twat I am.

Contributor
Here's some text to go with it, never realised how useful commentators are.

Or mute footage and use RadioLeMans.com

A map as well http://www.24stundenonline.de/event.php

And for an alternative camera angle: http://tv.audi.de/#/01

Contributor
I head off for the night, just as a beemer nearly walls it trying to overtake

Contributor
Camera crew are awake now! We don't just see one shot of the pits like last night! 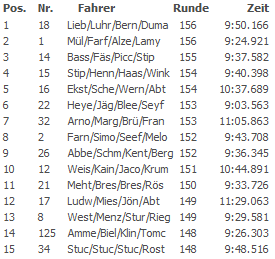 Contributor
Great weekends racing, not really sure what happened but I saw plenty of action

I'm struggling to find even a semi-decent write-up of the weekend, it would be nice to know what I've been watching - does anyone know of one?

For starters this from Aston Martin:

and this from Audi: http://www.motorsport.com/#/endurance/news/audi-nurburgring-24-hours-in-germany-race-report/

and this is interesting. There's a nice gallery on this site as well.http://www.evo.co.uk/news/evonews/269230/2011_nurburgring_24hour_live_race_report.html

If I find anything else I'll post it later. Enjoy

Pacific Ocean Blue said:
The new Nurburgring was brought into use mainly because of the difficulty experienced getting safety crews around the old one. After Lauda's accident there were no safety personnel on hand, thus three drivers who had stopped for a variety of reasons took it on themselves to drag Lauda from his burning car.
There was no problem with lack of seeing cars, 300,000 people would attend a GP at the North Circuit.
However, they didn't all necassarily pay, a big problem for the people with a vested interest in raking in money!

"No matter what sentiments you feel for Nurburgring, no matter how roundly you condemn the place, you would have to concede that Hockenheim is no kind of an answer. Niki Lauda's terrible accident in 1976 brought to light the 'Ring's major shortcoming: it is too long to be adequately marshalled. There can be no arguments about that. The situation was summed up by John Watson: "I'd much rather race at the 'Ring, said John Watson, "but I'd rather survive at Hockenheim".

Doesn't stack in the 21st Century, I'm afraid. The marshalls and stewards did a very impressive job during last month's 24hrs. I've seen much less efficiency and speed of response in some short circuit events this year.

Contributor
No excuses, watch and listen.

Thanks tooncheese I forgot it was this weekend! Doh!

Contributor
Here are the final results. There was chaos at the end, car 11 slows for the line, and car 66 steals third and goes off for another lap. Then a clio cup car smashes into an Porsche idling for the clock to tick over. And the leader breaks down doing doughnuts on the in lap. 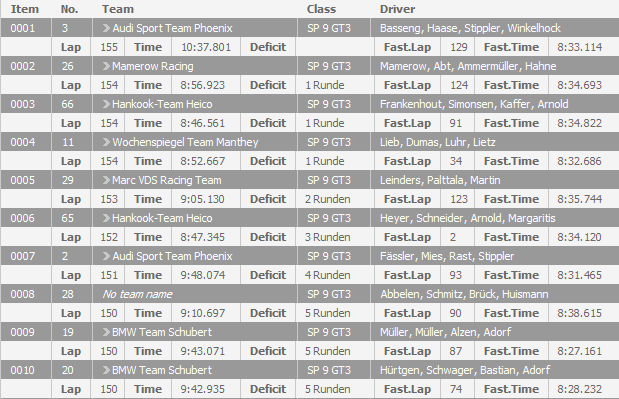 Chaos indeed. The Porsche was car 11 running out of fuel. Having passed the leader fending off the Merc (car 66) he needed to complete another lap (lap 155). The hapless Clio tail-boned the Porsche as it crept to a halt (the driver patently distracted by flag waving peeps trackside). Car 66 then needed to complete his 155th lap to cement the third place - which was well earned after a several laps chasing down and tussling with car 11.

Unfortunately the Audi TV and ADAC TV directors were pre-occupied with the winning Audi (Car 3) to capture all of the action. We also missed the winners of the other classes crossing the line.