Contributor
Formula E comes to Mexico for its one and only race on a purpose built circuit tomorrow. This event also boasts the best podium of the year too, The season so far has produced some pretty good races and has been nicely unpredictable. I speak from experience on that front as I’ve been trying to predict it in these intro articles all year and have got it wrong pretty much the entire time.

The current championship leader is Jean-Eric Vergne after the Techeetah team came from nowhere in Santiago to secure the sports first ever one two finish. Not to be sniffed at when you consider they are a customer team (of Renault) and only got 1 days testing pre-season compared to everyone else getting 8. Of course it wasn’t without incident as the quick release seatbelts they fitted for the driver change were a bit cheaty and second driver Andre Lotterer mounted his team leaders car going down the main straight in attempt to hump him out the way. Vergne does have a tendency to get involved in odd situations. He remains the only driver I have ever seen take pole position whilst travelling backwards over the time beam. Will Techeetah remain at the front? Impossible to say but Vergne has been in contention at all races now so you have to consider him as a title challenger.

Someone who is not a title challenger is defending champion Lucas Di Grassi who still remains on zero points and probably floods of career defining tears. To say Audi’s well publicised early entry into Formula E as a manufacturer has gone a bit Pete Tong is an understatement. At this point we are on the verge of a disaster of the same proportions of the Millennium Dome or the Zune. The thing is that when the car has been running its race pace looks pretty good but they always seem to be too far down the grid to use it. If Audi are going to bounce back anywhere then Mexico is probably the place. They were head and shoulders above everyone else in testing which was done on purpose built circuit and that should translate to here in Mexico. It has in the past been a good circuit for them. A win here would heal some wounds but the drivers and constructors title seem too far now.

Elsewhere the usual suspects will most likely be in contention. Buemi is steadily pulling points back on the title contenders and will be in the running. Bird and Rosenqvist are doing a great job at scoring high points consistently and I would expect one of them to be in the lead of the championship on finish of the race this weekend. Jaguar too are one to watch and I expect them to get a big result (a win?) at some point this year. Piquet is pretty much there and there abouts but his team mate Evans needs to translate his obvious pace into results. Of course, as we’ve seen this year, the teams further down the grid are only a good performance and a bit of luck away from a win. The great thing about Formula E is that a good bit of driver form or a track that suits a car can really bring someone in to play.

So once more into the unknown – my money is on a Di Grassi miracle comeback win this weekend but I’ve been wrong about pretty much everything so far this season. Of course I’m the only one making these predications – any of you lot care to join me in predicting things wrongly?

In the UK you can see qualifying (17:45) and the race (21:30) live on Spike tomorrow (Saturday). If you’re a sadist you can also watch it on Eurosport. For those of you who live internationally its shown live on the Formula E website and if you follow this link http://www.fiaformulae.com/en/championship/tv-schedule/ you can find out which channel covers Formula E in your country.
Last edited: 2 March 2018

Contributor
I enjoyed it, probably more than any e-race I've seen in the last couple of years.

Valued Member
Audi look not awful in the hands of Abt, who is thoroughly beating Prost in the Daddy's Favourite Driver E-Championship. Can't decide if it's a good weekend for Jev; he's extended his lead, but you'd suspect that Buemi is going to be more of a title threat than Bird, for example.

Contributor
Was a bit gutted for Rosenqvist as thought he had that one wrapped up and instead it's dented his championship hopes.

Good race. What it showed me is that before the end of the season that Jaguar is going to start winning races. It's all a bit season one where Piquet was quietly quietly catchy monkey before steeling the title at the end.

I think it's been a pretty decent season so far and the field really is evenly spread.

Valued Member
Piquet is twice as far away from the Championship lead as he was in Season 1 though, plus I would expect being behind Prost-LDG-Bird is more comfortable than being behind JEV-Rosenqvist-Bird-Buemi. 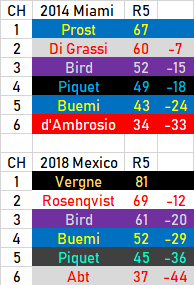 Piquet will win a race this year; his energy conservation is too good for him not to. But I don't see him winning the title.

Contributor
Hadn't realised it was bigger than season 1. Felt like he came from miles back that year.

Everyone from driver to team seems to be conspiring to put themselves out of the title race at moment. I mean where were Bird and DS Virgin this weekend? Jaguar and Techeetah seem to be the most consistent teams out there with both drivers on similar pace (well....it took Lotterer a while) but seems massive gaps between other team mates. Has anyone seen Nico Prost lately?

I enjoyed the race but I'm still having a really hard time coming to terms with wanting Piquet to do well. I just can't get my head around it. This season Jaguar do need to make that final step up to achieving regular podium finishes and hopefully that first win especially as Audi have now managed to get their name on the top step this season.

Contributor
I still think Evans is faster than Piquet cider_and_toast but he just always seems to have some issue.

Just noticed on teabagyokel that Danny Abt has snuck up to 6th place and is in contention. Without the earlier DQ he'd have been 3rd in championship and everyone would have been talking about Audi moving towards the title. *edit* actually Abt would be level on points with Rosenqvist! Forgot to take off Felix extra win points.
Last edited: 5 March 2018

Valued Member
Going to have to hunt through the 5 player, or whatever it is, as I missed all of it due to my youngest child selfishly having a birthday and expecting to be taken out for dinner.