Here we are the pre race quiz for beligium, bit late sorry I literally think on Monday dont forget to get Italy quiz sorted. got that abit confused

. but also I always try to have interesting take on the quiz. have educating & entertaining

its raidillon actually
4) since we returned permanently to spa in 1985 only 3 drivers have won this GP, who didnt go on to become a world champion, can you name them
(1pt for 2 / 2 for all 3)

Coulthard 99 Massa 08 (even if provisionally finished 3rd) Riccardio 2014
5) What year did Jackie stewart had his Fabled Accident at the Masta Kink.

1966 - Living with death - 1966 Belgian Grand Prix
6) Who in a interview about the 1998 Crash said this - it was a bit scary. I had no brakes, no steering, nothing was working. I was just sitting there hurtling down the track with wheels hitting me on the head & cars going all over the place. There was nothing I could do except sit there & think

, where is this taking me
Eddie Irvine - David Coulthard - Johnny Herbert

Eddie Irvine
7) on the 1998 theme out of the 11 team that took the start 10 team had at least 1 that crashed, who was the only team where both cars came through unharmed

Carlos Sainz, who turns 25 on race day
9) Who in 2008 after pitting on penultimate lap for inters, went from 9th to 3rd (pre penalty) 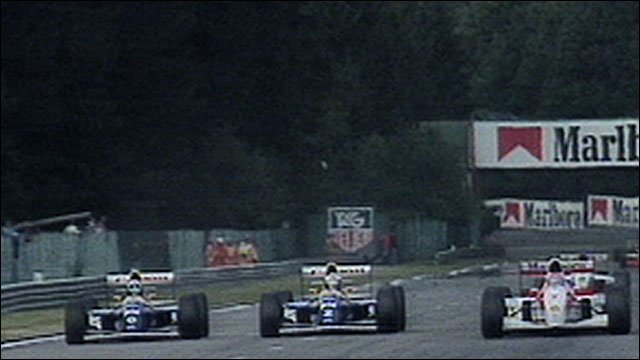 Contributor
Lovely quiz but I did crap at it, an embarrassingly low 1 for me

and that was a lucky guess

i didnt think id made it this is difficult

I think this was my worst quiz ever, 1 point and only because I happened to read about birthday boy today...

Valued Member
Quiz questions are only easy if you know the answer.

Btw isn't that Andretti (7) in the McLaren. No yellow helmet, the amount of cars overall suggest it was when Andretti was lapped.