Valued Member
Nico Rosberg is the first new winner since 2009. So I thought, how has the rate of drivers winning their inaugural races changed over the history of the Championship. Here's the graph: 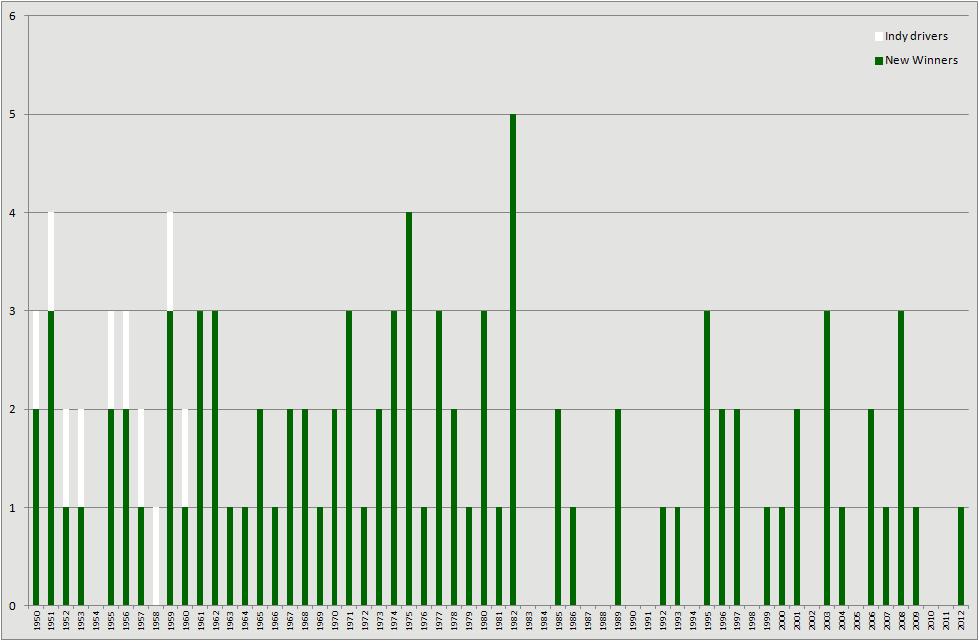 Now, obviously there were going to be a few new winners in the opening couple of years, but the number was somewhat kept down by the short seasons. The white bars show Indy500 winners who won their first World Championship race, and I have tried to obscure them with the background in order to ignore them.

It is interesting that there is a definite split in the rate that appears at the end of 1982. There'd been at least one maiden winner in every season from 1959-82, and suddenly there were only 7 new winners in the next decade. What I would like to venture this is down to is a large turnover of drivers up to 1982.

1982 was the last year of regular Formula One driver deaths. This can somewhat explain a number of the 'new' winners; some previously uncompetitive drivers had been promoted to Championship winning cars - Patrick Tambay at Germany that year is an example as Villeneuve's replacement.

In addition, the reliability of the top packages improved at about this time too. On 1st January 1983, the record number of wins for a driver was 27 by Jackie Stewart. 11 years later it had been eclipsed by 3 frequent winners - Prost, Senna and Mansell who had won 122 Grand Prix between them in that time. With the ultra-modern reliability, the effect gets worse. There have only been 6 Grand Prix winners in the time between Mark Webber's first win and Nico Rosberg's - (Vettel, Webber himself, Barrichello, Button, Alonso and Hamlton). And of course Schumacher's win of 91 Grand Prix took its toll too.

This explains why the largest group of new winners followed the old guard clear-out of 1994, with Senna's death and the retirements of Prost and Mansell. From 1995-97 there were as many new winners as from 1983-94.

So maybe we don't want too many new winners. Certainly if it means going back to the high-turnover that was seen when there were many.

I think the lack of new winners is mostly due to increased reliability and that it's more common since 1984 for a team to be able to dominate. Which kinda goes with the increased reliability: if you got a fast car before the 80s, you'd break down a lot. From 1984 on, a fast car wouldn't break down so much. So there's less chances for the others to win GP, even though there are more GP than in the 50s and 60s.

It would be interesting to see a graph with the percentage of races the best car won.

Contributor
Interestingly though its almost like normal servie is resumed because we had 2 Grand Prix winners retire before this season (Trulli and Barrichello) and whilst we had the return of Kimi to counter that we still had one less race winner lining up on the grid than the previous year - so Rosberg's win has just returned the situation to normal. In fact you'd be surprised how often that happens.

Valued Member
Maybe it's just the way the graph is presented but it doesn't look too much like there is a problem finding new winners in F1. The current top drivers all started fairly (very) young so it's inevitable that they will have longer careers at the top than say in the 50's, 60's and 70's - even with the higher attrition rate.

It would be interesting to see the drivers ages overlaid on that graph as I think there has been a steady decline. Even Britney isn't that old is he?

Valued Member
He's 26. The oldest début winner of this century is Mark Webber. The youngest victor of the first 13 years of the Championship was 22 and there were 10 drivers in that time older than Webber when he won his title.