Long time reader, first time poster. Anyways, since this season has been so crazy and seems consistency is the key the championship, I created a simple metric to help measure which driver is performing the best. I call it Total Driver Performance (clever I know). It combines Average points per race and average positions gained/lost per race to come up with the TDP. Formula: average points per race divided by 25 + average positions gained/lost divided by 23. That total is then divided by two. Let me know what you think and if you have any suggestions, please let me know.

Contributor
It's an interesting concept, and there's some interesting results (di Resta, Glock and Grosjean, for example).

Now, you asked for suggestions, and I'm afraid I get myself far too interested in these things so you're probably about to get an essay!

It's difficult to improve without making the system much more complicated, but I think the average positions gained/lost has a large dependence on starting position. It's impossible for the driver starting last to lose places and impossible for the driver starting first to gain places. To try and make it more fair, I'd suggest somehow giving extra weighting to places gained in the first few positions and extra weighting to places lost in the last few positions.

This still disadvantages the guy who starts on pole, however. In fact, it probably provides a massive advantage to drivers who start say in the top 5 and move up a couple of places. So, this system may not be the right one to use either, but you see the sort of thing I'm suggesting!

You could also try to include something that compares the performance of a driver to that of their team mate. This could be something like (for driver A vs. team mate B):

This gives a value between -1 and +1, +1 being when driver A completely outclasses driver B and -1 when the reverse is true.

My suggestions probably lead to a reduced contribution from the actual points though, so you may want to increase this but you can have a play around... if you're interested in anything I've said, feel free to ignore me!

Staff Member
Hope you don't mind F1 Shift.net but I've wrapped your data in the pre tags to improve the layout.

Contributor
Good data, it's always hard to quantify this season as there are so many variables, but to improve it would it be better to factor in relative car performance, mechanical failures and overtakes? Because, from what I can remember, Karthikeyan has lucked into many of his finishing positions, mainly because of mechanical failures, and he has performed very few actual overtakes for position. But great concept!!!

Thanks for all the suggestions and ideas, I really appreciate it. I know my metric isn't perfect, but it gives an idea anyways, so incorporating you're thoughts can make this thing work! sushifiesta I will work with the starting position idea and see how I can use that, I think that's great. I'll take a look at the weighted system too. mjo I'm not sure how relative car performance could be factored in, but I'll try to think of something!

I also have an overtake/overtaken metric (based on the data collected here) that I'll post up later tonight.

Here's the overtaking metric. This is nothing fancy at all, but still fairly interesting. Thanks to the great data collectors at this great site for letting me use their info. Simple: Overtakes-Overtaken divided by career GP's competed in. Keep in mind I did not put an emphasis on weather for this, so all overtakes or overtaken carry the same weight:

I just realized I have no Idea how to make that look pretty on this forum, so sorry about that...

Staff Member
Karthikeyan has made a total of seven overtakes: http://cliptheapex.com/overtaking/drivers/narain-karthikeyan.762/

F1 Shift.net Looking at you excellent website, I now understand the table.

I have worked with the Total Driver Performance metric and have a pretty good solution. Instead of using 23 as the possible positions gained, I used average starting position minus 1. This still does not take into consideration mechanical failures or relative car performance, but right now I don't have the time or energy to go through and figure out who's race ended based on mechanical failure, driver error, ect. So here's the new and (slightly) improved TDP. Again, open to suggestions. 
Yeah sorry about that. I need to figure out how to make the data from excel legible on here...Maybe for now I'll just do print screens. 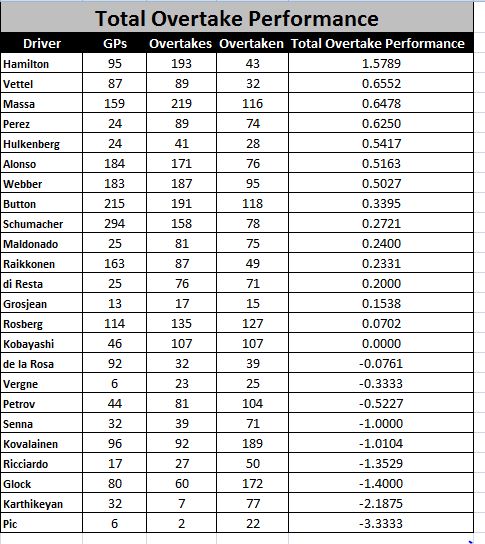 F1 Shift.net said:
I need to figure out how to make the data from excel legible on here
Click to expand

You can use the table or pre tags BB code: http://cliptheapex.com/help/bb-codes

Failing that, images will do fine - you can embed them as thumbnails or full size after uploading.

Valued Member
It is of course infinitely easier to image link them in Brogan, haha.

And I believe @F1Shift.net has all the stuff he's doing on http://www.f1shift.net/p/nerdz.html, with full CTA referencing, which is nice.

teabagyokel said:
with full CTA referencing, which is nice.
Click to expand

After a small nudge from yours truly

Brogan said:
After a small nudge from yours truly

..Yeah sorry about that again!