Contributor
Lewis is really getting himself tied in knots over environmental issues lately.

Hamilton: Formula E won't be the pinnacle 'in the foreseeable future'

Lewis Hamilton won't be making a switch to Formula E any time soon as 'in the foreseeable future Formula E is not going to be the pinnacle', but the Formula 1 champion says that he wouldn't mind a behind the scenes role in the future.

He loves Formula E because it sustainable and wants to be involved behind the scenes but not race in it because it's not the pinnicale even though its the future. He understands F1 damages the environment but he is promoting a sustainable fashion label (made by kids in sweatshops in China).

I admire the fact he feels he should talk about the issue but he seems very confused. 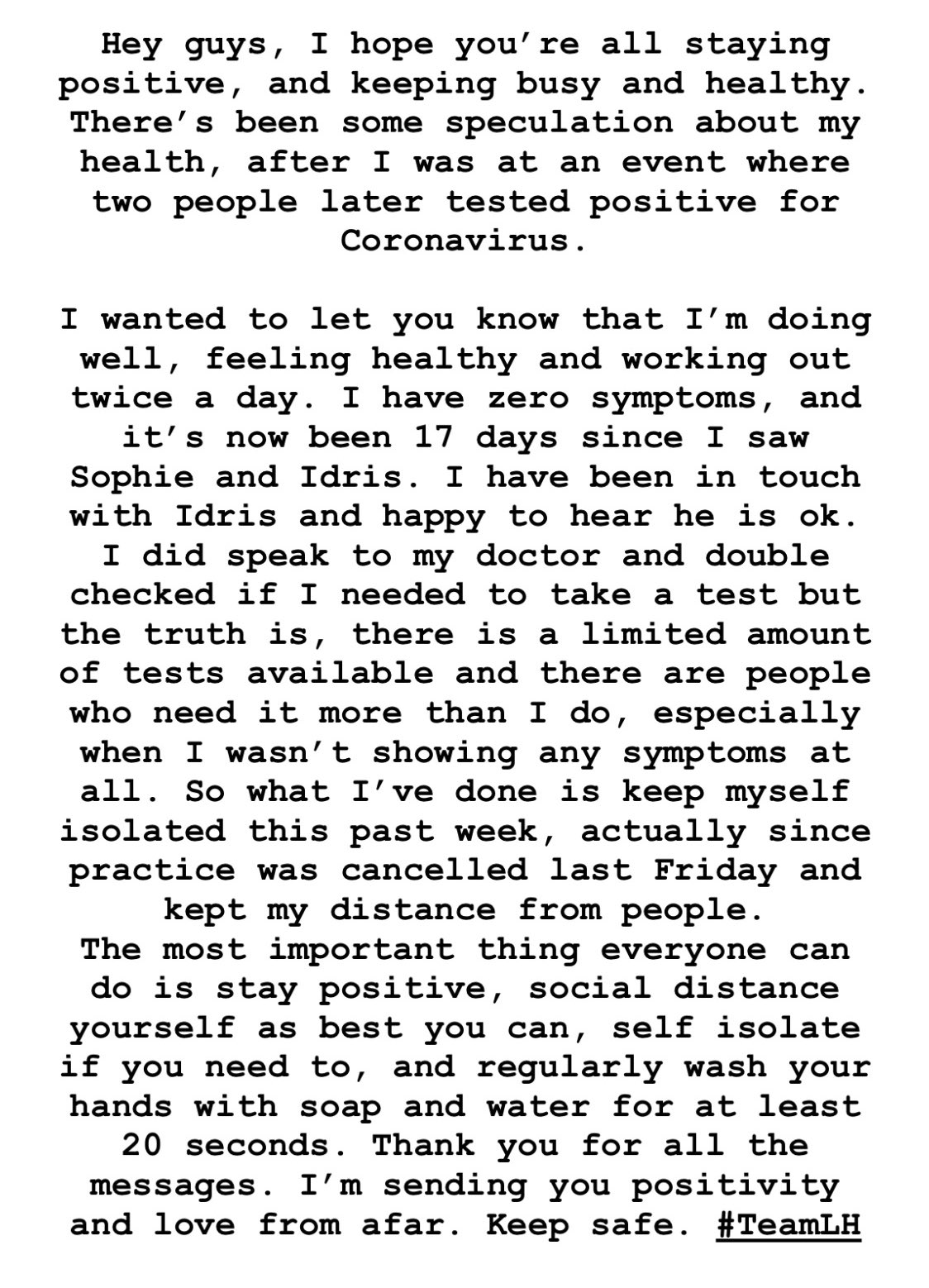 Contributor
i struggle to give a ****.
i'm currently ok, by the way, i hope that makes everybody else relieved.

gethinceri said:
i struggle to give a ****.
i'm currently ok, by the way, i hope that makes everybody else relieved.
Click to expand

I was going to say its nice to be relieved by you but perhaps not eh?

Last night, one of my favourite musicians did a live stream on insta from his front room for an hour, playing tunes on his acoustic guitar and chatting. There were about 800 people logged into the stream. He took requests. Read questions etc. To be honest, it was fecking brilliant and put a smile on an otherwise shite day. At no point did he say "just to let you know I'm OK"

Contributor
At least it's not as bad as that Gal Gaddot (??) video. Millionaire celebrities singing John Lennon's Imagine whilst safely concealed in their mansions? Not been a PR disaster this big since they named the Titanic the unsinkable ship.
Last edited: 21 March 2020

Well not us obviously but I'm pretty sure many of you can.

Hamilton tells F1 stars not to ignore racial injustice
Hamilton later added to his original statement: “I do not stand with those looting and burning buildings but those who are protesting peacefully,” he said.

The looting and burning are people who are masquerading behind the protests . They dont care about injustice but create the opportunity to cause anarchy

Contributor
Mostly organised white supremacist groups. Exactly what they used to do in the 60s.

i fully admit i could never ever know what it feels like. ive only had witnessed it once in person. i was at a fa cup game & my aunties partner was using racial terms towards a opposition player because he didnt like him because of the court case involving 1 of sheff utd players & that was very uncomfortable, thank goodness we won otherwise we wouldve had an Eric Dier on our hands & i shouldve said something.

in the white house. there is something there & maybe since martin luther king, racial segregation usa have progressed anywhere near we thought or expected. & hearing Clara Amfo on radio 1 talk about this absolutely broke my heart


https://twitter.com/i/web/status/1267808690301739008
but (this is my feeling on this) i felt awkward with Lewis Hamilton publicly guilttripping Riccardo Leclerc & Norris into putting these things on. this is a huge issue but thats just felt awkward how it played out. & 1 of my pet hates more on birthdays. when telling them in person isnt enough anymore is now that some people feel every opinion must be shared & you cant not have an secret opinion. because for me it goes without saying that what happening its horrific but its not my place because i dont know enough do it correctly & im not doing it a bit of knowledge

but i do hope that some of this will help people see sense because while ever farage & trump are relivant we need this. so hopefully this time the people who protest will vote. unlike with brexit when vast majority of people who were on these marches when didnt vote. if all Americans who protested this voted in the election like they did with Obama in 08. trump would be out in landslide
Last edited: 2 June 2020

Whether Lewis was right or not to rat out his peers . This is something very personal to him and brings him back to his early days in getting into F1 and notably in karting when the spoilt rich kids would seriously racially abuse him that he had no right to be racing because of his colour.

Aside from that Trump has done nothing great for America other than show what a real jerk he is.

Trump is an asshole, of course...
But how is Biden better than Trump?
Especially when you consider that everything that has been happening in America in recent days is very similar to the result of planned actions on the part of the Democrats.
We must not forget that the murder by a police officer took place in a city where the mayor is a Democrat.
And the fact that these riots, as well as other color revolutions around the world, are fueled by Soros' structures.

I understand Hamilton's feelings perfectly.
But he stressed that attention to the murder is not a reason for mass riots, looting.
It is one thing to Express your opposition to race inequality and, even more so, to the impunity of racially motivated killings.
But the slogans used by demonstrators such as "a Good COP is a dead COP"are absolutely unacceptable.

anyone is better than trump. i think he is stoked up the racial divide that was probally lying lower

A Democrat being mayor changes nothing. The police unions have made it virtually impossible to hold any officer accountable, no matter how egregious his actions. Far too many become police to have power and authority rather than to "protect and to serve" as their motto claims.

siffert_fan said:
Olegg
A Democrat being mayor changes nothing. The police unions have made it virtually impossible to hold any officer accountable, no matter how egregious his actions. Far too many become police to have power and authority rather than to "protect and to serve" as their motto claims.
Click to expand

Contributor
IMO, Trump is nothing less than a fascist, as are his core constituents.

Throughout his tenure, he has pulled play after play out of the Third Reich playbook, and his followers don't even recognize that (or they embrace the idea).

His Attorney General has done a reasonable jopb of turning the Department of Justice into a combination of the Third Reich SD and RSD whose purpose was primarily to spy on the opponents of Hitler.

Americans better read up on the history of the 1930s before it is too late.

It is telling that he has proclaimed Antifa (antifascists) a terrorist group, but hasn't proclaimed organizations such as: Aryan Nation, Aryan Brotherhood, Boogaloo, the KKK, Fourth Reich or the American Nazi Party as such.

All, could we confine the discussion in this thread to Lewis Hamilton. The wider political implications of race and actions in the US can be discussed in the relevant posts in the Gravel Trap area.

Thanks for your understanding

Hamilton is a self serving couch activist.

Tells everyone he cares about the environment and lives a climate neutral life by offsetting his CO2 output. All whilst while sitting in on a comfortable couch in his own private jet, waiting to land, so that he can hop in one of his super cars before reaching the race track to then climb into his F1 car.
Good that he went vegan, it makes it easier to promote his own brand of restaurants serving vegan dishes.

In conjuction with UNICEF he has pictures taken of himself, where he embraces poor children and then talks about poverty in third world countries and social inequality in the UK and elsewhere. Does he do anything? Of course, he contributes to the growing inequality by shifting his earnings into tax havens, shafting the community/country he grew up in. At least he's proud to be British. A true hero, I'd say that to if they were my biggest fan base buying my merchandise.

During the off-season there was an article in which he complained about a lack of diversity in F1 which doesn't fit into his narrative, as he says all people are equal. There's plenty of diversity and if Hamilton truly believes all people are equal then he shouldn't reduce himself and others to the colour of their skin. In the years he's been F1 there have been people of all walks of life socially and culturally with which he has worked with and raced against.
Last edited: 8 June 2020

Bernoulli said:
Tells everyone he cares about the environment and lives a climate neutral life by offsetting his CO2 output. All whilst while sitting in on a comfortable couch in his own private jet
Click to expand