On this very day thirty years ago came to an end the life of one of Formula One's most perduring legends. A man who embodied the concept of motor racing in its purest, most romantic form.
It's hard to think of anything that hasn't been said already about Gilles Villeneuve. A man devoid of fear, who never gave anything other than his very best whatever the circumstances often capable of achieving breathtaking feats often in the face of impossible odds. We hear often the words "taking the car into positions it has no right to be in" about drivers who out-perform their machinery when they display impressive form. That expression could have been invented for Gilles, for whom the heroic was a matter of routine. Heroic feats he was made to perform, and he had to more often than he should have had, having found himself in the cockpit of two of the worst cars Ferrari ever produced in F1.
"Why try? He's different to the rest of us. Just different". J Laffite, Watkins Glen 1979

It speaks volumes of his enduring legend that the tales of his exploits continues to capture the imagination of those who like myself weren't even around during his short career.

Here are a few choice pictures in a sort of photo tribute from his days on snow to Formula Atlantic through to the Ferrari cockpit: 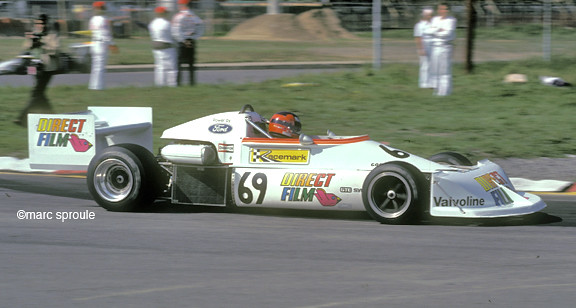 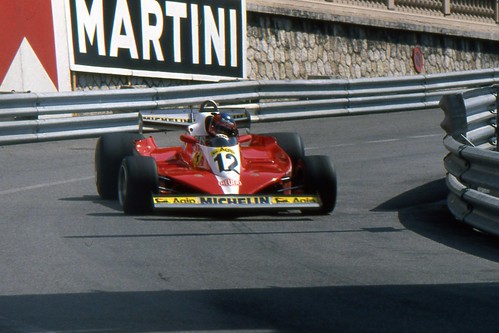 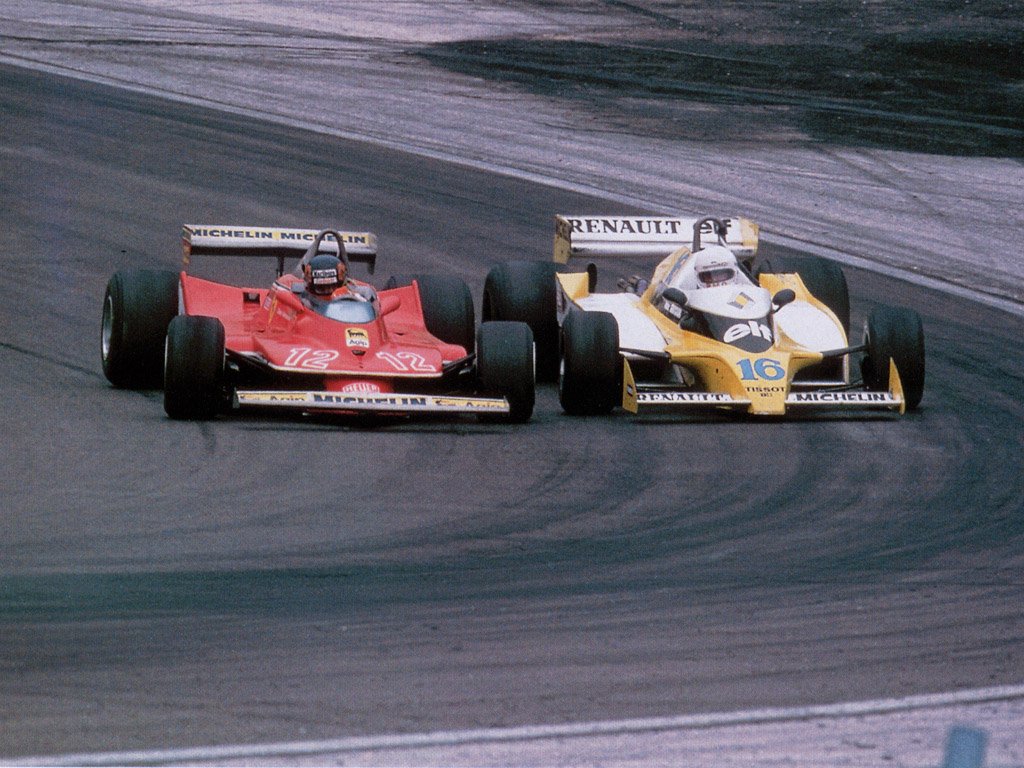 ... and of course, THAT battle with Arnoux:

Champion Elect · From Sunny Brid
I'm down here for your souls.

Valued Member
Thanks Incubus - Gilles deserved his own thread. Many of you will have seen the chat Clarkson gave about the Senna movie and how Villeneuve was always his idol until he watched some of the old footage of Senna. The difference between Villeneuve and Senna for me was one of character. Gilles helped Jody Scheckter to win the title in 1979 even though he knew he was the faster driver which, I presume, was why the actions of Pironi at Imola in 1982 were such a shock to him. It's chastening to think that without that moment Gilles may well still be with us as he would never have gone out for that final, fateful, lap on worn tyres and tangled with Jochen Mass' March.

Gilles couldn't help but give 100%. His efforts in the 312 T5 and the 126C were simply stunning. He won the first ever race for a turbo car at Monaco, the track where "a turbo could never win" and the 126C was a complete dog of a machine. Simply a brilliant driver but also an incredibly fair competitor.

Contributor
Thanks for memories Gilles.RIP.

A great talent, no doubt about it. One of the quotes that I like the most, comes from Gaston Parent, his agent:

Was that quote from Gerald Donaldson's biography?

The definitive biography on Gilles, that. And the best sports biography I've read actually. To be recommended to those who haven't read it.

Incubus said:
Was that quote from Gerald Donaldson's biography?
Click to expand


I can't tell ... I saw first posted in a forum some time ago. But thanks for the tip, a read I will definitively consider.

Scheckter was given the hurry up that if he did not win Ferrari would back Villeneuve .. Scheckter won two races including I think ZOlder where he caused an incident where Regazzoni tipped into Villeneuve who then had to fight from last to 3rd only to run out of fuel on last lap which would probably given GIlles the title


I bet Ray wishes he still was on here

Incubus said:
Was that quote from Gerald Donaldson's biography?

The definitive biography on Gilles, that. And the best sports biography I've read actually. To be recommended to those who haven't read it.
Click to expand


It is the best biography if you are an F1 fan. Gilles was a no nonsense racer. It was all about being the fastest. If you broke down or crashed, so what. He would have hated these tyres.......

No politics or "I'm not having him as my team-mate", he would race anyone in anything. Just an awesome racer.

I would recommend to anyone that they read Donaldson's book. It is the best F1 read available.

How cool that Jacques got to drive the 312 T4 today at Fiorano. I was lucky to get the chance to see Gilles drive in both F1 and Formula Atlantic cars. I also worked closely for a few years with the gentleman that managed the race team at Ski Doo when both Gilles and his brother Jacques raced snowmobiles for the Canadian mark. He told stories of their fierce competitive rivalry and on track battles and love of speed that just adds to the mystic of a great talent lost way to early. We love you Gilles..Salute!

There is that deliciously funny - if slightly terrifying - anecdote to be found in Gerald Donaldson's biography of Gilles, narrated by team-mate, rival, and close friend (a rare combination these day) Jody Schecker, narrating a trip on Gilles's helicopter.
In Mid-air a few few minutes after take-off a big red light on the central dash starts blinking. Jody goes "Hey Villeneuve, what's this about?"
"Ah don't worry mate. Nothing important..."
Red light keeps blinking and Jody begins to feel a bit uneasy.
"What's going on Villeneuve? (he always called him Villeneuve rather than his first name)"
"It's nothing. Really."
The helicopter then begins a freefall and Scheckter begins to panic. Gilles re-starts the engine and the 'copter resumes its flight. Red light comes on again, stars blinking anew.
Thinking Gilles's lost the plot Jody reaches for the in-flight instruction manual, frantically turning the pages concerning the list of technical issues that may arise. He spots a representation of that blinking red light at the centre of the cockpit. "Your battery is over-heating. Find landing site as a matter of urgency".
"Hey Villeneuve, that battery's on the blink. For ****s sake you mad bastard get that thing down on the ground!"
"It's OK mate. Happened before. I know what I'm doing.
The 'copter begins another freefall. Gin Gilles re-starts the engine.
Finally Jody understands what Gilles is doing: all along he's been punctually shutting down the engine to let the battery cool, and restarting just before they hit the ground, and repeats the process every time that red light comes on. As thought it was the most natural thing in the world.
Paralised with terror Schekter was infuriated. Gilles was laughing

I think Lauda said before a Grand Prix that there was a chopper making noise the night before and he blamed Gilles.

I remember Niki mentioning that incident in To Hell And Back. Apparently he was looking for somewhere to land in the middle of the night near Niki's hotel!

Supporter
Isn't it ironic that GV is lionized for things that if they were done today he would be crucified for. I suppose it's like that in almost all endeavors now. Different day and age and all that...

Certainly doesn't stop me from enjoying those half magician/half maniac moves he routinely attempted.

I don't remember him involved in too many incidents of his own making ...he did not do late braking or sudden weave chops that Schumacher , and Senna use to do

Supporter
Nobody ever doubted Villeneuve's speed, but his wild side was evident early as well.

In his second race for Ferrari at Fuji 77 he drove over the back of Ronnie Peterson, going airborne, with two people being killed as a result.

Then he was on his way to victory in just his 6th race for Ferrari at Long Beach 78 when he came upon Clay Regazzoni's Shadow. He tried to squeeze past the backmarker at a very inopportune spot and got pitched over him into the barrier.


And though he drove some terrible Ferrari's, it was not uncommon for GV to finish the race with a deranged wing and some damaged bodywork. There's no doubt he had more incidents than any other driver of the period.

But I do agree that he was a very fair driver. He never gave up a spot easy, but he was definitely fair. 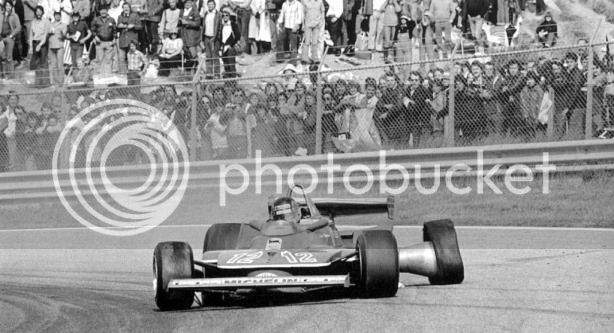 But then again, that is not something new in the world of racing ... 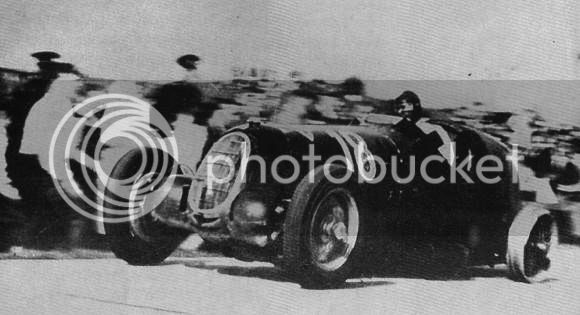 there were more reckless drivers than Villeneuve that time

- Riccardo Patrese - remember the witch hunt kangaroo court in 1978 after Monza crash at the start and made the scapegoat and some drivers said they don;t want to be in the same race as him

Supporter
Patrese was unfairly blamed for the Peterson crash. James Hunt led the charge against him and never relented. Over the years people realized just how harsh Riccardo was treated after that tragedy.

Brambilla may have crashed his March on several occasions, but I don't think he was known for coming together with people. And not that it matters but it was at the shortened Austria 75 race that Vittorio won,and then spun into the barriers.

Today would have been Gilles' 63rd birthday. To celebrate the milestone I'm posting a (portion) of a really nice article about Gilles that I'm borrowing from sideposts.com

...
Like Jimmy Clark, Gilles was a mass of contradictions. He drove without fear but never put another driver at risk. He was as competitive as any driver we have ever seen but was loved by his rivals. The other drivers accepted that he was the best but because of his personality there was never any animosity toward him. He was the last true maverick but, in some ways, he was the most modern driver of his time. He was a traditionalist but capable of the most incredible innovation.

As I mentioned earlier, some people misinterpret his antics in some of the hopeless cars Ferrari provided him with as over-driving or not understanding the technicalities of the sport. In reality the cars were rubbish so he simply took them by the scruff of their necks and forced them to do things way beyond their capabilities. As a result he did not drive nice, neat lines in them - he threw them around because that was the only way to get speed out of them. When he had a good car he drove precisely and accurately but, unsurprisingly, it is his performance in less than stellar machinery that is etched on the memory. There are people who believe that the only way to measure a driver is by what he can do with sub-standard machinery. On that scale, as on many others, Gilles was the best there has ever been.

In the days before the fax or internet were invented, telex was the only way to communicate in writing. Effectively, a telex was a typewriter connected to a phone line. At a time when most of the drivers only thought about their cars while they were sitting in them, Gilles had a telex installed in Monaco and every day sent long messages to Ferrari's secretary with suggestions for improving the car. He not only understood the technicalities of the car well enough to come up with a never ending list of improvements, but he pushed the team into trying them in the manner of Schumacher.

It is unlikely that we will ever again see a driver like Gilles Villeneuve.

Salut Gilles. Thanks for the memories.