Contributor
Not looking good for Andretti or Trulli at the moment. Still no lap times set and just two tests left.

I expect that announcement that they are switching back to last years car to come over the weekend. It will be a big slice of humble pie for both who have talked up their new technology. The Trulli team especially who have really talked up what they can do.

It does look a bit grim. Fortunately, if they do switch back to last year's cars, they won't be the only ones running the old cars, since Aguri is still running the SRT 01. Strangely, I think it will be satisfying to have the older cars running, since they'll provide a known benchmark to compare the new solutions to.

I did have an interesting realization looking at the testing spreadsheet I've been keeping for Formula E (trying to develop one for F1 next year). Inputting the fastest times for each day of testing, and running it through a formula, after three days of testing data, my spreadsheet actually predicted a 1:29 lap time for ABT by the end of the 6th day of testing. They hit that target 2 test days early. I'm now left wondering whether that means there's more to coax out of the car, or if that's all that can be found. If I had all the fastest sector times for the ABT team, I'd be able to know for sure.

So far, most of the teams haven't hit their likely fastest lap, most of them around a second adrift of the predicted time. NEXTEV and Aguri are a long way adrift of the field according to my calculations, but at least they've set some lap times.

Contributor
Aguri are an odd one as they've been running drivers who haven't been in the car before and I think they've done more laps than anyone. I doubt they'll get the SRT 01 to beat the newer cars on a level playing field but I think they are well positioned to pick up the spoils of the inevitable reliabilty issues that a lot of the other teams will suffer. They will certainly have the set up maximised more than the teams that will switch to it at the last minute.

It all depends on who is driving the thing of course. I'm hoping they'll plump for Tom Dillman as he deserves a shot but I have a feeling Sakon Yamamoto will be propping the team up financially.

Basd on their being absolute troopers during testing - holy cow, so many laps, guys! - I'd like to see Berthon and/or Dillman get drives at Aguri. They've got pace, or can get pace with a few more miles in the car (based on their improvement over so so many laps). Berthon was apparently registered as one of the pool of drivers ahead of season 1, and is very keen for a Formula E drive, so I'd love to see him get a shot.

Contributor
My lasting memory of Berthon is this

Yes, there was a mistake in judgement in that incident, but mistakes do happen. It looks to me like he overcooked it a bit, and was caught out by the cars braking in front of him. I'm fairly forgiving of mistakes, I can overlook the odd incident here and there. I think that comes from my dad having a couple of real stinkers of drivers who, when they were quick, they were very quick, but when they were unlucky, they were very very unlucky.

Contributor
I don't have a problem with Berthon. I just remember that incidnet well. it was also the same race Dillman came from pretty much the back to nearly win it.

Contributor
This is an intersting article.

The hint at the bottom of the article seems to suggest Bernie and co are just accidently scheduling F1 GP on the same weekend as Formula E events. Bernie trying to black out a potential rival? Surely not.

When is that old dinosaur going to put himself out of everyone's misery?

Valued Member
I suspect Formula E can find a venue - Battersea or no Battersea. Since it's only a year old it has no circuits it will be emotionally attached to.

Ecclestonasaurus must be so jealous. A stated aim of city races; Paris, Miami and Moscow on board, and no-one insisting on races in Belgian forests, Japanese fairgrounds and British airfields.

Good for Ecclestone that the champion of Formula E was such a failure in F1. Against Alonso. Like Raikkonen.

Contributor
Him winning Formula E last year has led to him getting a drive at the Indy 500 this year so someone is paying attention.

Valued Member
Well, E is supposed education in economical driving, which is where Piquet really excelled.

Meet the new livery, same as the old livery.

Contributor
Just got in from the testing at Donnington Park and was a really good day. Will write it up with pics etc when I get the chance.

Ooh, looking forward to that RasputinLives

Contributor
As predicted Andretti switched back to the season 1 car for the final session today and actually got some running in.

The Trulli car however did finally get out the pit lane for some installation laps. I'm not expecting a lot from then in China though. They weren't even in the pit lane when I went yesterday.

One of the most talented drivers of his generation scrabbling around for a seat in Formula E in a team that will probably struggle. I just hope they give it to him and he drives the bloody wheels of the thing and makes headlines.

To me, it's a no-brainer. Yes, the team might struggle this year in Formula E, but there's a chance they'll come back stronger next year, and then the year after that. The other benefit is that if you get into the Andretti family teams, they're likely to listen to you when you ask if you can race in another of their teams when a seat becomes available. I hope he gets the drive too. 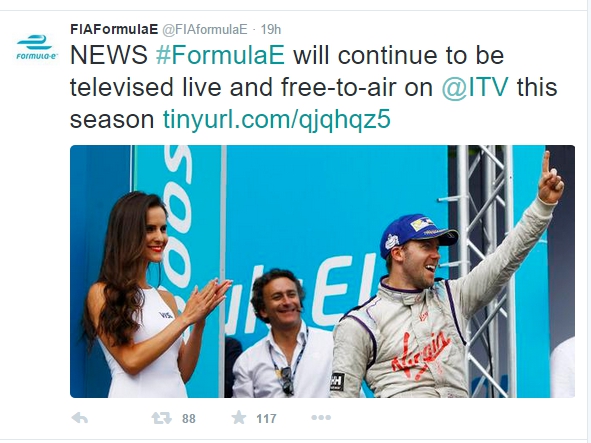